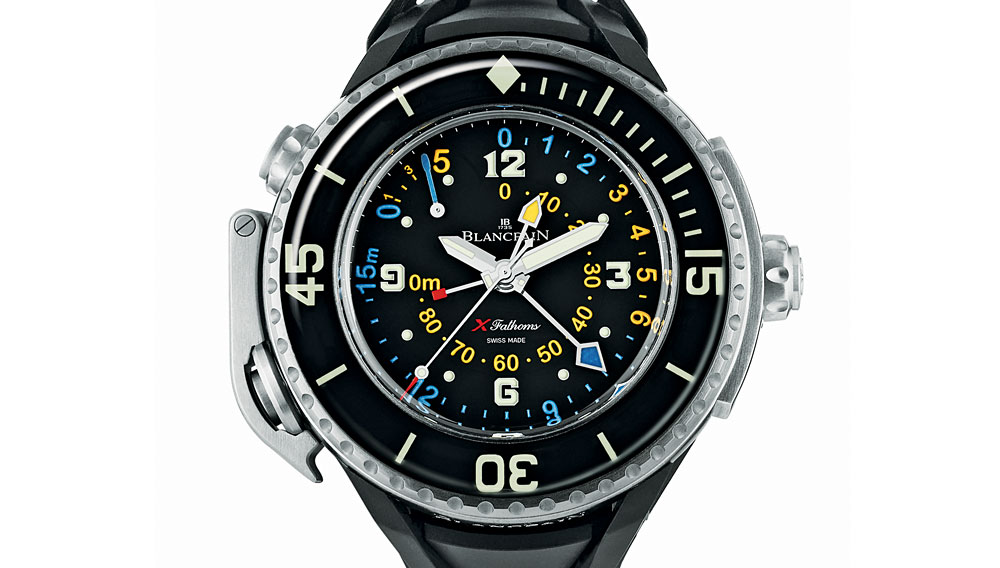 More than a few eyebrows were raised among the collectors who gathered recently in Dubai at the world’s largest suspended aquarium for the unveiling of Blancpain’s latest timepiece: The revelation took place at the bottom of the 10-million-liter tank. It was not, however, the unusual circumstances of the introduction that elicited these surprised reactions; instead, it was the X Fathoms itself that caused the stir. Measuring over 55 millimeters in diameter and 24 millimeters thick, this new diving watch represents a marked departure from the traditional complications and classic watchmaking aesthetics that have characterized Blancpain since its relaunch in the 1980s. Yet beneath the X Fathoms’ Brobdingnagian dimensions and radical design lies a purpose-built mechanism conceived by a man with an intimate knowledge of its utility.

As an avid diver, Blancpain CEO Marc Hayek found himself in the unique position to develop and commission this specialized piece, which reflects both his professional and personal interests. X Fathoms’ functionality centers on its depth gauge, which—in contrast to those of most dive watches produced by other manufacturers—addresses practical diving situations as well as ultradeep dives. A large-scale indicator records the maximum depth of a particular dive up to 90 meters, while another more sensitive indicator, calibrated to a finer scale, measures the rate of ascent between 15 meters and the surface—the critical window for safe decompression. A special five-minute countdown function handily records decompression stop times.

The specifications for the X Fathoms derive from Hayek’s extensive diving experience, but much of the technology that drives the design was gleaned from a variety of sources, including Breguet—another distinguished brand that Hayek runs for Blancpain’s parent company, Swatch Group. “We looked at a wide variety of materials to create a flexible membrane to operate the depth gauge,” says Hayek. “In the end, we came back to the Liquidmetal alloy we used in Breguet’s Réveil Musical [in 2010].” This alloy—which is specially cooled to achieve an amorphous rather than crystalline structure—deforms predictably as water pressure increases. With the assistance of a special cam, the watch can register changes in depth as slight as 30 centimeters.

Hayek is quick to point out that although the X Fathoms (priced between $38,000 and $44,000) is effective, it is not intended to replace modern dive computers. Still, the careful thought that underlies the timepiece’s design enables it to leap ahead of other dive watches in terms of functionality. “Most Swiss dive watches look best on dry land,” says Hayek. “Above all, I wanted to make one you can actually use.”