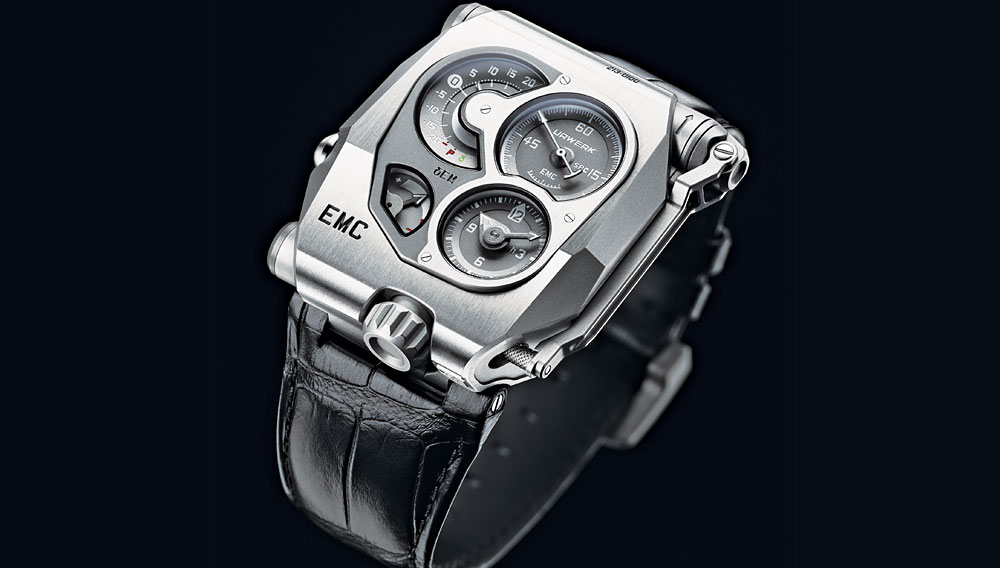 “Electronics almost killed the Swiss watch industry,” says Urwerk’s cofounder and lead watchmaker, Felix Baumgartner. “Everyone remembers those sad days, which is why electronics remains a taboo in fine watchmaking.” This pervasive resentment, however, ultimately did not deter Baumgartner or the rest of his team from integrating electronics (albeit in the most horologically pure manner possible) into the design of the small brand’s latest timepiece.

The EMC (an initialism for “electromechanical control”) is at its heart a mechanical timepiece, meaning conventional mechanical parts regulate its timekeeping and display; yet Urwerk has introduced to this traditional schema an electronic optical sensor that provides the owner with information on the accuracy of the watch’s rate, which can be adjusted via a screw directly on the case. While a previous Urwerk model featured similar adjustability, its owners were effectively obliged, in order to measure the rate, to visit a watchmaker, who uses electronic tools for that purpose. “We wanted to take the interactivity of our watches to another level,” says Cyrano Devanthy, an Urwerk engineer. “This was only possible by adding electronic feedback.”

According to Devanthy, all members of the development team were extremely concerned about how electronic components might be perceived by their industry colleagues and consumers; they therefore took pains to avoid any parts, such as batteries, that would wear out quickly. “We settled on a hand-operated electric motor-generator that charges a capacitor with enough energy for a reading,” he explains. “The optical measurement system we are using is actually much more precise than the ones most watchmakers use.”

The EMC ($125,000) represents a milestone for Urwerk for reasons other than its electronic components. The watch not only dispenses with the complex revolving-satellite display system that has become the brand’s watchmaking signature, but also—unlike its predecessors, which were built up from Peseux or Girard-Perregaux base movements—features the first movement the company has designed and constructed completely from scratch.

Urwerk has been careful to preserve and cultivate the horological credibility garnered from these achievements. Measuring and enhancing mechanical chronometry is a relatively benign method for incorporating electronics into a fine timepiece—especially in conjunction with the hand-crank rate-adjustment system. Still, having tasted the forbidden fruit, the company foresees other electronic projects in its future. “We like to break the rules,” says Devanthy. “This adds an additional playground and extra value to the mechanical movement.”