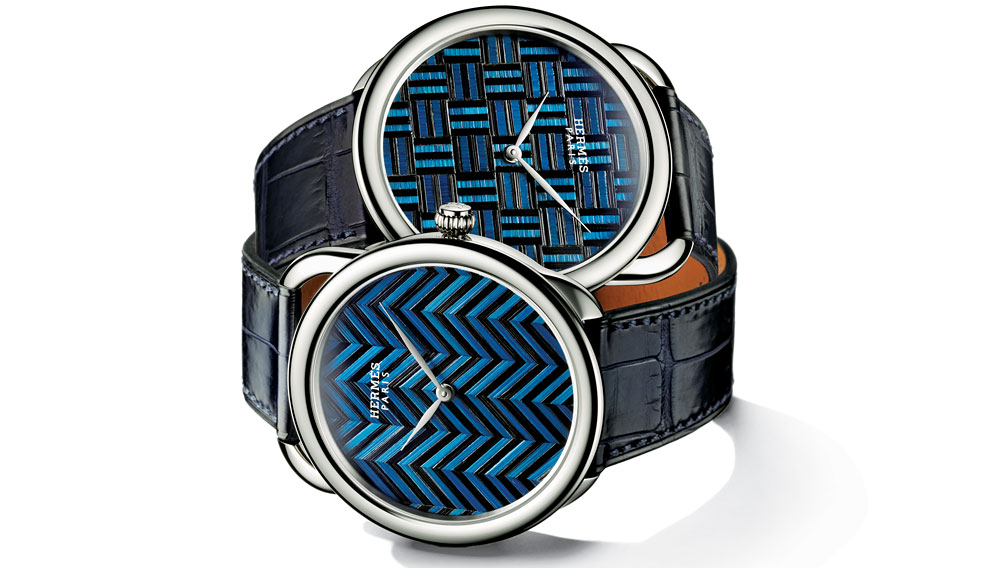 Over the centuries, watchmakers have exploited nearly every conceivable technique for the design and decoration of timepieces; thus, when Philippe Delhotal, artistic and creative director of Hermès’ watch division, began researching new methods for distinguishing the brand’s offerings, he set himself an ambitious goal. For the last three years, Hermès has produced extremely limited series of watches with engraved and enameled dials that, though exquisitely executed, nevertheless draw upon relatively conventional crafts. Delhotal was determined to venture into unexplored creative territory. After months of detours and dead ends, he finally discovered the technical terra nova he sought within the company walls, thanks to Pascale Mussard. A granddaughter of Émile Hermès and the head of the company’s Petit h division, which produces a line of whimsical collectibles from remnant leather and other materials, Mussard suggested that Delhotal speak with an artisan whose unusual skills offered potential for something new and different in the watch line.

The individual in question, Agnès Paul-Depasse, is a practitioner of marqueterie de paille, or straw marquetry, a method of decorating furniture and other surfaces with intricate geometric patterns, which became stylish in the 1920s. Artisans flatten straw—actually a special strain of rye—into slender ribbons that, when colored and glued into patterns, produce striking visual effects. The technique fell out of vogue after World War II but was revived in the 1980s and 1990s by a handful of craftspeople who continue to practice this rare and complex art.

“The right kind of rye for marquetry is only grown by a single family in France,” says Paul-Depasse, whom Delhotal commissioned to adorn a series of timepieces for Hermès. “Once you color it, it is nearly impossible to achieve exactly the same color again. This gives each design a very individual quality.”

Paul-Depasse will create dials for the brand’s Arceau model in sets of just two pieces each. The first of these, priced at $115,000, will feature a herringbone pattern similar to that found in many Hermès fabrics.

Although straw marquetry has been used peripherally in the field of horology (Jaeger-LeCoultre recently boxed an Atmos clock in straw), Hermès has successfully applied the technique to wristwatches in a manner that is not only unique but also organic to the brand. In 2010, the company’s furniture department completed a tribute to Jean-Michel Frank, the early-20th-century architect and a marqueterie de paille proponent, which included examples of the craft. “We have always tried to have our artisan watches reflect the culture of Hermès,” says Delhotal, who plans to continue exploring the brand’s rich history of artisanship for future concepts. “This is the first time we have done something that is really out of the box.”