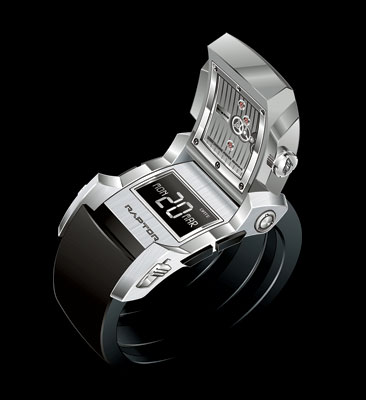 The recent spate of high-tech-looking complicated watches would have seemed incomplete without a contribution from Jorg Hysek, watchmaking’s foremost evangelist of modernist design. Hysek, who works with a team of designers, has been eschewing convention for more than 30 years, periodically releasing advanced and sometimes assertively futuristic designs under his own Jorg Hysek marque or through the major brands that regularly commission him to invigorate their lines.

His latest venture, HD3 Complication, applies his maverick touch to the tourbillon, watchmaking’s loftiest circle. The HD3 name acknowledges the contributions of two younger designers, Valérie Ursenbacher and Fabrice Gonet, who have worked with Hysek for the past 15 years.

With avant-garde designs becoming more common in complicated watchmaking, Hysek’s approach does not seem as iconoclastic as it once did, but his perspective remains progressive. “People live with high technology today, like computers and mobile phones,” he says, explaining the intent of HD3’s first two 33-piece limited editions—fancifully futuristic tourbillons named Capture ($169,000 to $215,000) and Raptor ($199,000 to $245,000). “I think it’s a little absurd for people to walk around with watchmaking art that has nothing to do with the way life is lived today. Our modernization is more than simply design; it is a philosophic change.”

Hysek has displayed this rebel attitude since his early years working for the rigidly conservative Rolex. Today, his free spirit is readily apparent at trade fairs, where he mingles barefoot with buttoned-down industry executives. Many of the watches he and his Team Styling agency have designed over the course of his career similarly flout convention by exhibiting aggressive contemporary lines, such as those of TAG Heuer’s Kirium.

As expected, HD3’s initial offerings follow suit. Capture is a round model with oversize details and scimitarlike curves on the case and movement components including the tourbillon bridge and plates. Raptor is a narrow rectangle with a cutaway dial that opens like a pair of jaws to reveal an interior level fitted with a separate digital quartz movement. The quartz includes a big date function and also challenges the accuracy of the tourbillon, which is regulated to a respectable plus-or-minus two-to-three seconds per day.

As a corporate entity, HD3, like many of its design-intensive peers, is minimalist; besides the three designers, the staff includes just two other individuals in support roles. Accordingly, the fledgling brand relies on the manufacturing expertise of specialty houses and contract suppliers. Finger, a small independent company in Lengnau, Switzerland, produces the futuristically detailed cases, and specialty watchmaker La Joux-Perret (formerly Jaquet SA) completes the bridge and plate modifications specified by HD3 on hand-finished Jaquet tourbillon movements. In Hysek’s view, this manufacturing method—employing independent teams of artisans—overcomes the mass-production mindset of the industry’s large holding companies, which, he believes, suffocates creativity.

In just over a year, HD3 has progressed from a concept to a functioning enterprise with two tourbillon models. Although HD3’s debut models incorporate complicated movements, Hysek acknowledges they are exercises in form more than mechanics. While both pieces are laudable for their original designs, the team already is anticipating its next, more radical step, which will involve the intricate workings of the movement. “We are working with [specialty house] BNB on completely integrating the case and the movement,” explains Hysek. “Complications and high horology are simply the greatest challenge, and that is why we entered the field. This is just the start.”