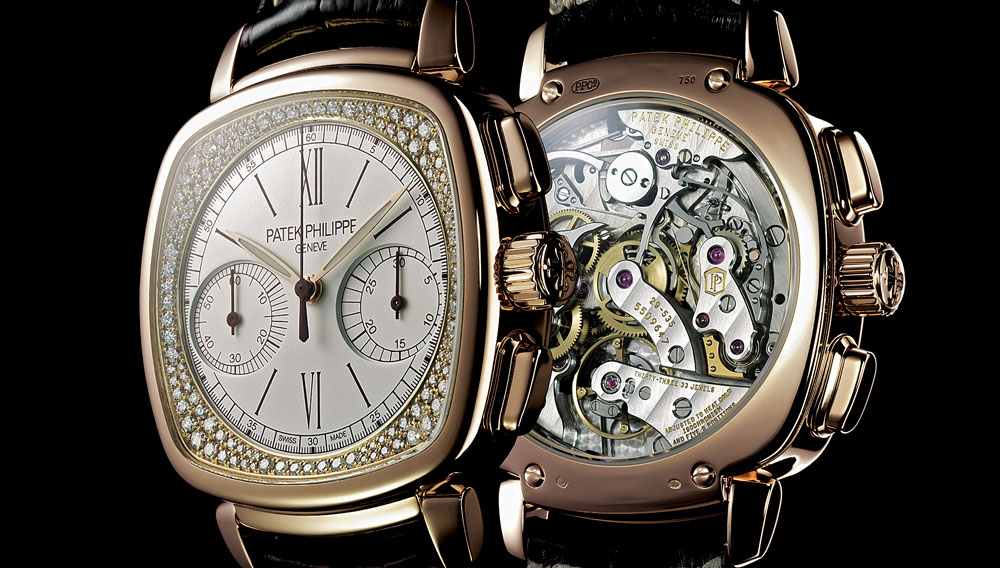 “Our feeling is that our new chronograph is the kind of watch an independent, successful woman will want to buy for herself,” says Patek Philippe president Thierry Stern, expressing a sentiment shared by most industry executives who have launched a new ladies model. But the Geneva-based watchmaker’s Ladies First Chronograph is far from being an ordinary women’s watch. Stern selected this delicate, cushion-shaped timepiece as the vehicle for debuting the company’s long-awaited hand-wound, lateral-clutch chronograph movement. His decision may result in a fresh horologic phenomenon: a women’s watch more coveted by men than by the customers for whom it is intended.

Many of Patek Philippe’s most devoted collectors (the vast majority of whom are male) have long regarded the company’s manual-wind chronographs as the epitome of traditional Swiss watchmaking. Unlike more modern designs, these prized watches require extensive hand adjustment; but because they have no winding rotor, the superb aesthetics of the movement’s swirling levers and bridges can be visually appreciated. While the Ladies First Chronograph is the company’s most recent manual-wind watch, another example, the 5070 chronograph, has been a favorite since 1998, despite the fact that its movement was one of only a few from Patek Philippe that were not made entirely in-house.

The new movement, which took five years to develop, not only corrects this irregularity, but also offers a number of technical improvements that close the performance gap that existed between manual-wind and modern vertical-clutch chronograph designs. A new gear-tooth profile and eccentric column-wheel adjustment smooth out the engagement of the chronograph wheel. Moreover, an improved blocking lever and a special cam on the minute counter reduce the quivering of the hands during chronograph operation—a flaw in older iterations of the movement that was often criticized.

If the conventional wisdom that suggests women prefer quartz or, at best, automatic movements is correct, then presumably only a small number of female buyers will fully appreciate the impressive technical enhancements with which Patek Philippe has endowed the Ladies First. And unless the company manages to produce a great many of these watches, most of them likely will be purchased as gifts by collectors with sufficient clout to secure them. These collectors, who are undoubtedly awaiting a men’s version of the chronograph, will find that this watch adds a new twist to their gift-buying experience: a long, excruciating tease.