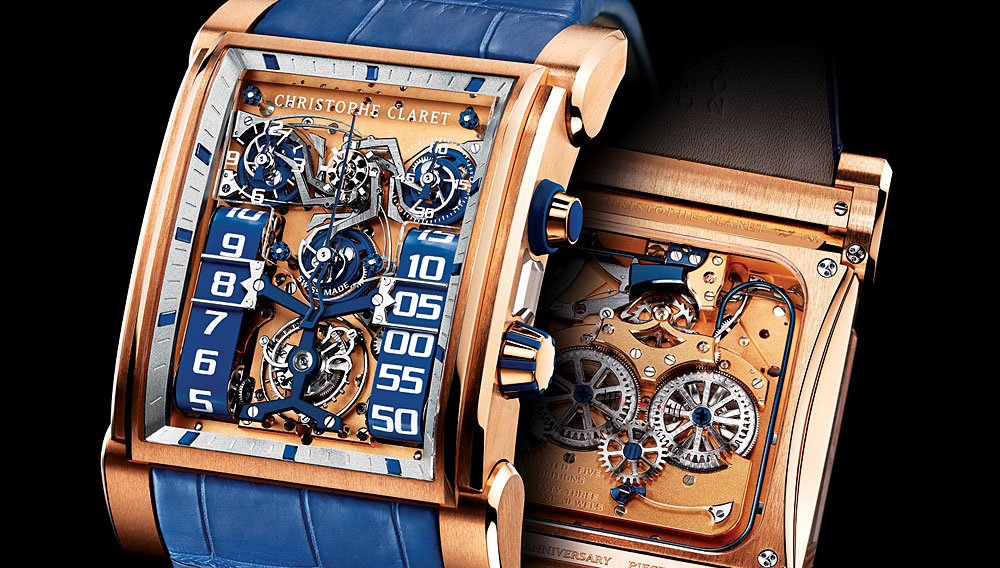 Over the last two decades, complication specialist Christophe Claret has been one of the watchmaking industry’s unsung geniuses. His creations have appeared under such brand names as Harry Winston, Jean Dunand, and deLaCour. For years Claret rebuffed suggestions that he create his own watch brand, making him somewhat unusual in an industry where self-promoting entrepreneurs with little or no experience in the craft of watchmaking often start companies. “I have always been far more interested in the technical side of watchmaking than in the marketing,” he says by way of explanation.

Claret, as many astute collectors know, has more expertise and credibility in the field of complicated watchmaking than do some of the brands for which he has built timepieces. Now those who are unfamiliar with him or his eponymous company can come to appreciate his skills through the DualTow, a limited-series tourbillon chronograph that Claret will release this fall under his own name to mark his 20th anniversary as a watchmaker.

His passion for the craft of watchmaking becomes evident as he animatedly describes some of the unusual aspects of the DualTow’s movement. The model, he explains, is named for the two rubber belts on which the hour and minute displays are printed. However, the most interesting part of the watch is its chronograph. Hooked fingers radiate from the DualTow’s column wheel to engage and reset the chronograph at the three separate counter assemblies. A resonant gong, similar to those used in minute repeaters, chimes during the operation. “To me, the system looks like a mechanical flower,” Claret says with obvious relish.

The design and presentation of the DualTow (priced around $521,000 for rose gold, white gold, or titanium, $567,000 for platinum) exemplify Claret’s remarkable perspicacity. The large case sports discrete articulated lugs to fit wrists of various sizes. The colored rubber on the display belts matches the straps and rubber detailing on the crown and pusher. Clients can customize each of the 68 watches in the series using combinations of metals plus rubber components and straps in various colors.

The DualTow is clearly innovative in design, but it also contains elements that remind one of Claret’s formidable reputation as a behind-the-scenes builder of tourbillons and minute repeaters for top brands. For example, the watch contains a sapphire bridge, a design he pioneered for Corum and Ulysse Nardin. The inclusion of this and other signature designs is appropriate—even expected—in an anniversary piece. But the technological sophistication of his work suggests that Claret should launch more watchmaking endeavors under his own marque. He does not discount the idea. When asked whether more models may be coming after the DualTow, he grins and says, “Well, perhaps.”