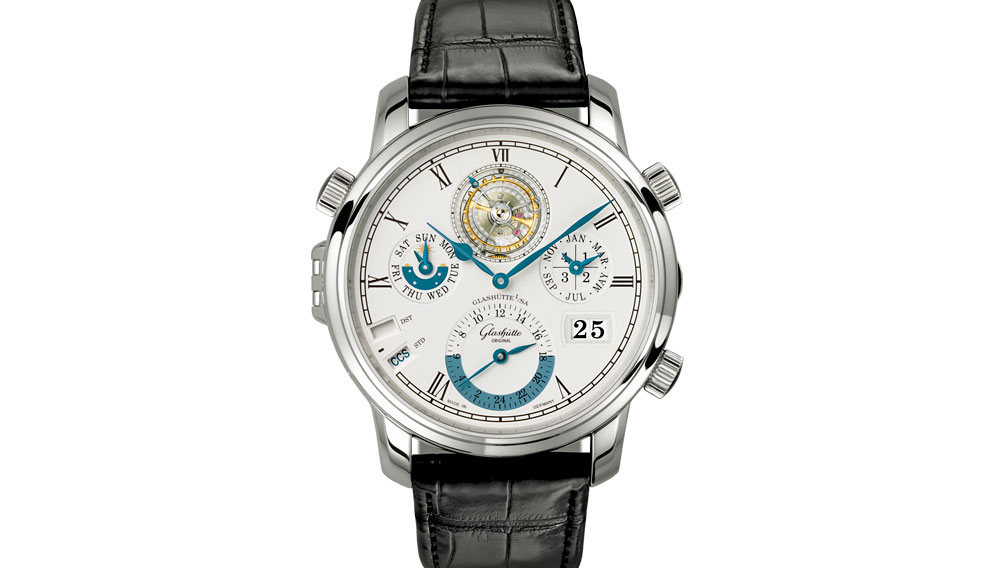 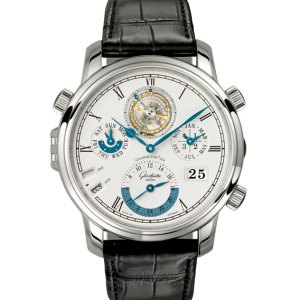 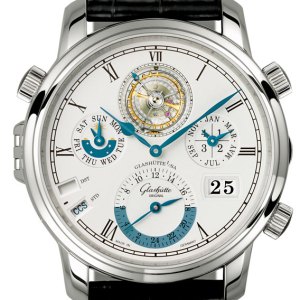 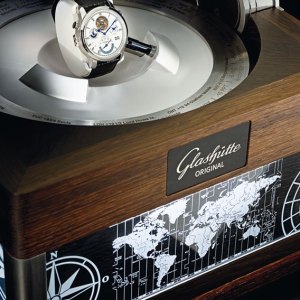 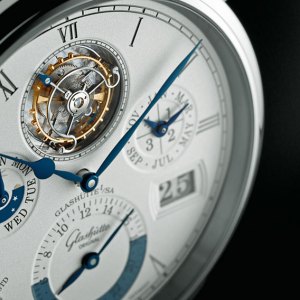 A sober, utilitarian character informs most of the timepieces assembled in Glashütte, the German watchmaking town in the southeastern state of Saxony that now bustles with a spate of new manufacturers. Although the recently minted firms also adhere to the town’s conservative approach to horology, the tendency to favor tradition is perhaps most pronounced at Glashütte Original, the brand that traces its origins directly to the collectivized factory that existed under the German Democratic Republic’s socialist regime. Indeed, even this firm’s foray into summit-level complicated watchmaking remains true to its predilection for practicality: The Grande Cosmopolite Tourbillon—the most complex and, at €325,000 (approximately $408,000), most expensive watch the company has yet produced—possesses a relatively restrained appearance. “We are accustomed to making very useful and practical watches,” says Dieter Pachner, vice president of sales for the manufacturer. “Our new Grande Cosmopolite Tourbillon is definitely built in this spirit, but it is also the most complicated wristwatch that has ever been built in Glashütte.”

Designed ostensibly as the ultimate traveler’s watch, this new model marries a perpetual calendar with a comprehensive, 37-zone world-time function that enables the owner to adjust the setting forward and backward via the crown as he changes time zones. According to the company, the engineers took special pains to ensure the mechanism, which is structured somewhat like a “cryptex,” bore no resemblance to any other on the market. Interestingly, the one seemingly superfluous component on this otherwise no-nonsense timepiece—the flying tourbillon—is the one with actual historic ties to the company: The inventor of this construction, Alfred Helwig, was a master watchmaker and instructor in Glashütte.

In several respects, the Grande Cosmopolite Tourbillon expands upon the expertise the company has developed in many of its previous, technically impressive models; however, many of the accoutrements and services that owners expect of a watch of this caliber are new to the brand. The city ring, inscribed with a location in each of the various zones, can be specially altered to include the name of the owner’s hometown, but the engineers have also taken the precaution of enabling the time-zone register to be retroactively reconfigured when countries alter the position or timing of their zones, such as Kiribati did in 1995 to become the first country to welcome the new millennium. And—perhaps the most practical measure of all—Glashütte Original delivers the watch in an impressive box with an integrated finger winder for the manual power system. “Our team has been much more creative in designing the right environment for this product,” says Pachner. “This watch will influence many of our future products.”