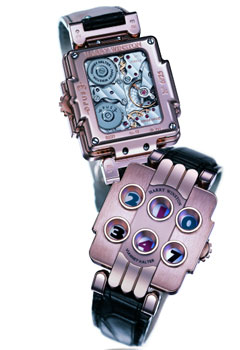 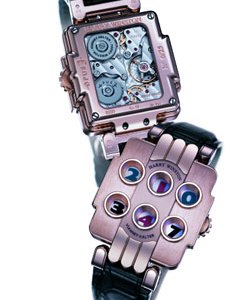 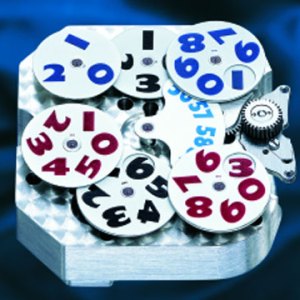 Harry Winston’s latest limited edition Opus timepiece is as intriguing as a Rorschach test. What it evokes depends on the viewer—perhaps an engine block, a sci-fi submersible, or even a slot machine, but certainly not a watch. Indeed, Opus 3 appears as strange as a six-dollar bill; it has no dial, no hands, just six holes flashing numerals for the time and date, and a horizontal winder to boot. This most un-Winstonlike timepiece is the work of independent watchmaker Vianney Halter, who has taken the renowned jeweler into uncharted watchmaking territory.

Each year since 2001, Harry Winston, best known for its powerhouse diamonds, has flexed its horological muscles by partnering with one of Switzerland’s leading independent watchmakers and creating a limited series of watches. The two previous Opus collections tapped the visionary talents of F.P. Journe and Antoine Preziuso. Halter, who will be producing a total of 55 Opus 3 timepieces (25 rose gold, 25 platinum, and five diamond-set platinum—priced from $62,000 to $98,000), may be less conventional than his celebrated peers, but he is certainly no less gifted.

Halter’s watches, which he himself handcrafts, possess their own brand of micromechanical brilliance. The Opus 3 represents the logical, if not extreme, extension of the jumping-hour concept, which has been a watchmaking staple since the 19th century. These timepieces display suddenly changing (jumping) numerals in windows rather than with traditional slow-moving hands. However, Opus 3 breaks new ground by employing this display for hours and minutes, as well as the date. The movement uses 10 stacked and overlapping rotating disks to generate a time display that is both idiosyncratic and cryptic: You have to know which window refers to which measurement of time before you can determine that it is 11:07 pm on the 14th of the month. The left column of windows presents the hour, the right column shows minutes, and the center column indicates the date—and in a stroke of whimsical genius, the center windows tick down the final four seconds of every minute before the minute indicators jump.

In essence, Opus 3 is the original mechanical digital watch. The technically demanding jumping-hour function has never been attempted on such a scale. Remarkably, Halter designed and built the movement from scratch, without using prefabricated modules. Only the balance and escapement were manufactured separately. Halter accomplished this feat in less than 18 months, about half the time most watch companies take to bring a new model to market. Halter’s atelier will produce, finish, and test each movement in the Opus 3, until the edition is complete.

For its part, Harry Winston is guilty of more than mere complicity in the strange design of Opus 3. Its product team created the case along with the quirky horizontal crown, which moves up and down like a gearshift to wind and set the watch. Such ingenuity indicates the extreme lengths to which the relatively young Winston team will go to develop the unique pieces that high-end collectors seek.

After just three editions, Harry Winston’s Opus projects have propelled the jeweler into watchmaking’s most elite circle. The collaborations shrewdly tap into the growing appetite among collectors for pieces that display a human touch, and the gifted watchmakers associated with the Opus projects lend them an authenticity that has placed them among the most eagerly anticipated releases. As for the community of sometimes struggling and often unheralded independent watchmakers, Opus has become a coveted showcase for their talents.

Harry Winston’s knack for recognizing the rising stars of watchmaking has certainly helped bring stature to the projects. No one exemplifies this more than the first Opus collaborator, F.P. Journe, who presented his signature resonance and remontoir tourbillon mechanisms in a Harry Winston case. Antoine Preziuso delivered a very different flavor to the brand’s second collaboration, which was based in part on projects that he had previously executed for Harry Winston. Preziuso applied his sense of mechanical aesthetics to produce a series of tourbillons and perpetual calendars that were both beautiful and technically ingenious.

“Each Opus represents a different mixture of Harry Winston and the master watchmakers,” explains Max Busser, managing director at Harry Winston Rare Timepieces. “This time, we were looking for a total departure from traditional watchmaking. Vianney responded positively to nearly every idea we threw out, and said, ‘Sure, I can do it.’ Personally, I am in awe.” Having stunned the fine watchmaking establishment yet again, Harry Winston is leaving collectors with a similar feeling.