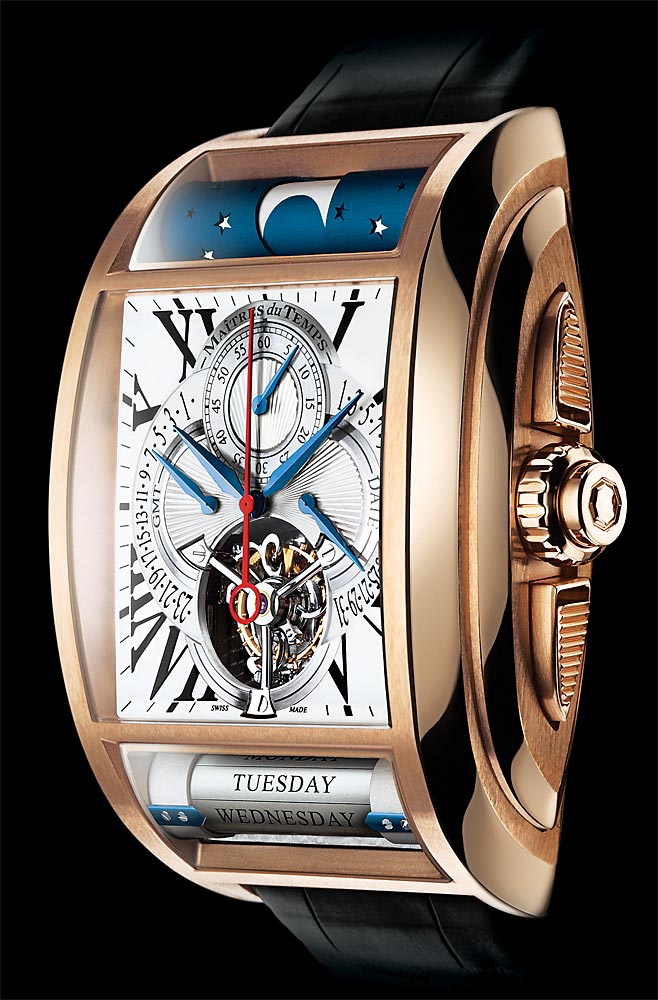 While browsing through an antiques shop five years ago with well-known complication specialist Christophe Claret, watch-industry veteran Steven Holtzman pointed out an old desk clock with rolling-bar indicators. Holtzman, the onetime distributor for the Roger Dubuis watch brand in North America, had long envisioned a mechanical wristwatch that incorporated such rolling displays at the top and bottom.

His vision is now a reality. Through an unusual collaboration with three other highly esteemed industry experts—Claret, Roger Dubuis, and English watchmaker Peter Speake-Marin—Holtzman has created the Maîtres du Temps (Masters of Time) collection, with rolling displays as its signature feature. “It is unheard of to have masters at this level standing side by side saying, ‘We did this together,’? ” says Doug Bradstreet, buyer of fine watches and jewelry for Wynn Resorts in Las Vegas and Macau.

Holtzman’s first partner on the project, Dubuis, spent 14 years in Patek Philippe’s high-complications department before establishing his eponymous brand in 1995. “We probably spent a year going back and forth with different ideas, looking for solutions for getting power to the rolling bars,” recalls Holtzman, noting the immense technical challenge of efficiently transmitting power 90 degrees to the two rollers while ensuring that they work simultaneously with the time, date, GMT displays, and chronograph.

Speake-Marin, who also has his own collection, was the second expert to join the team. “He was the glue that held the group together,” Holtzman says. Speake-Marin served as a technical advisor and made introductions to outside suppliers for cases, dials, and hands and to various watchmakers for quality-control functions.

Finally, Claret was a natural choice as the manufacturer to execute the project. Since his encounter with Holtzman at the antiques shop, Claret had experimented with the rolling-bar concept in other projects, including Jean Dunand’s Shabaka, and he was able to come up with solutions for Holtzman’s exclusive design, such as placing power sources at both sides of the case. According to Holtzman, Claret created the design of the movement, while Speake-Marin and Dubuis worked together on different aesthetic aspects.

Chapter One, the debut model of the six in development, is a first-ever combination of a tourbillon with a monopusher chronograph, a retrograde date display, a retrograde GMT display, and the two idiosyncratic rolling bars to indicate day of the week and moon phase. The movement contains 558 components. The team reviewed hundreds of case designs before selecting a 62 mm curved tonneau shape, which, in red gold, weighs a whopping 190 grams. A small window in the guilloché dial provides a view of the rotating tourbillon, which perhaps best exemplifies the group’s teamwork. “Claret gave us the base tourbillon, and Dubuis infused the cage and bridge with a Gothic design,” Holtzman says. “Peter had to adapt that to Claret’s existing movement.”

Maîtres du Temps will produce 33 pieces, priced at $400,000 each. Next January the company will unveil Chapter Two, developed with Dubuis, Speake-Marin, and Daniel Roth. It will be a more accessible production piece, which Vaucher will manufacture in larger quantities.