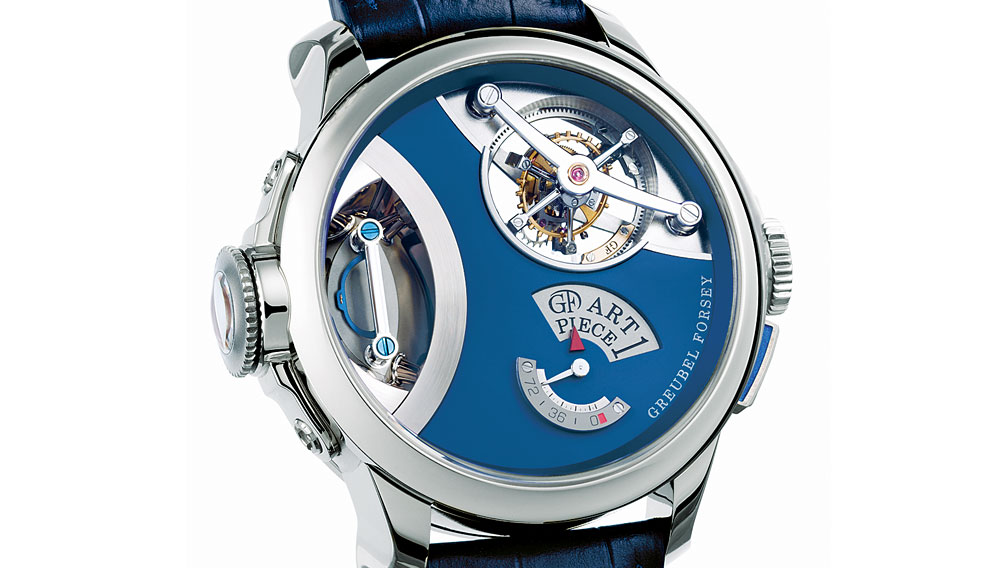 “The first time I saw work on this scale, it was absolutely mind-boggling,” says Stephen Forsey, a cofounder of the boutique watchmaker Greubel Forsey, whose timepieces many collectors regard as near-miraculous feats of micromechanics. Forsey is describing his first encounter with the infinitesimal sculpture of Willard Wigan, the English artist whose detailed creations are literally small enough to pass through the eye of a needle. Given their mutual interest in things miniature, collaboration between the two seemed inevitable.

“Actually, it was Robert [Greubel] who first discovered Willard,” the watchmaker recalls. “He really had no idea what our kind of watchmaking was like until he visited our workshop. Once here, not only did he feel an affinity for what we do, he found a few ways to improve his own tools.”

The eventual outcome of this meeting was not only a refinement of Wigan’s specialized utensils (he makes almost all of them himself) but also a new Greubel Forsey watch—the $1.65 million Art Piece 1. Unveiled in its completed state earlier this year, the Art Piece 1 incorporates a built-in microscope that enables the owner to admire one of Wigan’s minuscule figures mounted inside: a three-masted sailing ship, whose hull and sails the artist fashioned out of extremely thinned gold. The rigging, says Forsey, “comes from fibers he plucked from the air.”

For its part, the watchmaking house’s most challenging technical contribution to this design was to develop a viewing microscope small enough to install in a watch—something professionals in the field insisted could never be done. Because Wigan’s maritime rendering, without magnification, appears to be nothing more than a fleck of gold, repeated setbacks in completing this crucial apparatus periodically cast a pall over the entire project. The final, functioning version resembles a crown on the side of the case, through which the details of Wigan’s masterwork are clearly visible.

Greubel Forsey intends to produce further Art Piece models on a bespoke basis, giving clients the opportunity to suggest their own subjects that Wigan will then interpret. While Art Piece 1 contains the brand’s signature double tourbillon, the raison d’être of the watch is clearly artistic: Two small hands discreetly display the time only when a button is pressed. This arrangement is appropriate, given that with this timepiece, Greubel Forsey leapfrogs over it competitors—many of whose models showcase artisan crafts—into a realm approaching fine art. “We began thinking of our watches in terms of art with our Invention Piece 1,” says Forsey. “With this collaboration, there are really no limits to what we can produce.”