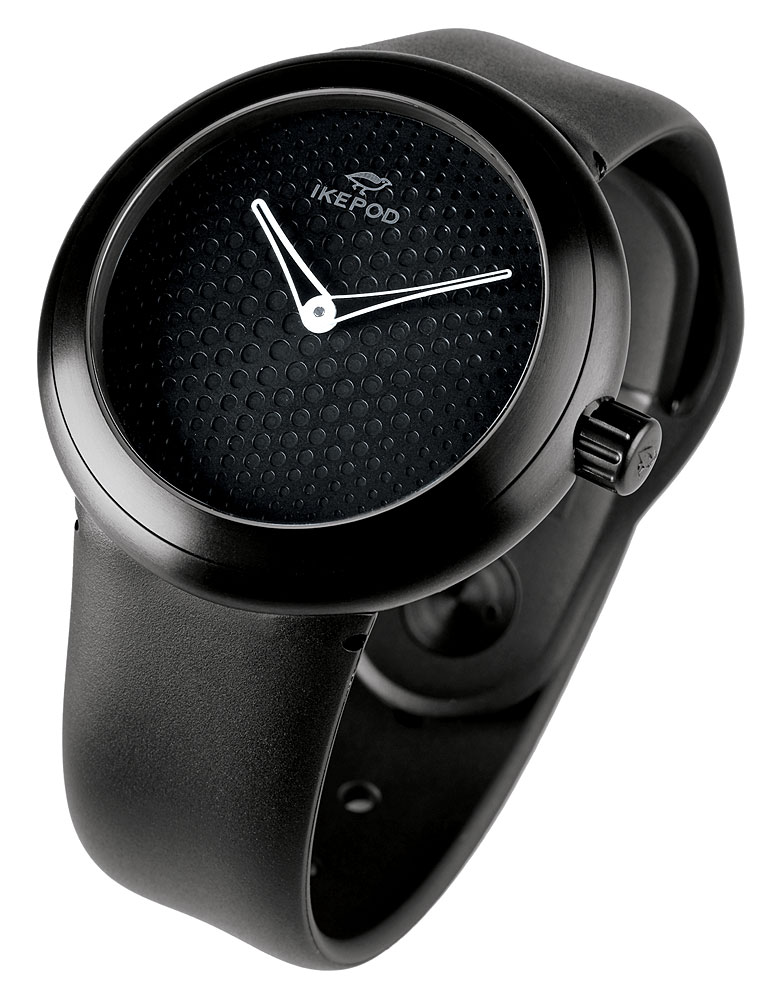 “An artist’s job is to predict the future and push the envelope,” says Adam Lindemann, a 46-year-old New Yorker who collects contemporary art and runs the recently relaunched Ikepod watch brand. By this definition, Marc Newson, Ikepod’s founder and sole designer, is an artist doing his job well. Lindemann, the brand’s chairman and CEO, calls Newson a visionary whose work is 10 years ahead of its time.

Australian industrial designer Newson, 43, introduced Ikepod in 1996 with partner Oliver Ike. The brand garnered attention for its futuristic, curvaceous designs, but it suffered from a lack of funding and from quality problems (the pushers on the Hemipode chronograph had a tendency to fall off). In 2003, Ikepod declared bankruptcy, and the Perficio Group purchased the rights; Newson’s ties to the collection were severed. Before relaunching the brand, however, the new ownership put it in Chapter 11 again. Ikepod was taking its last gasp in 2005, when, according to Lindemann, Newson implored him to “Save my baby!”

Lindemann—who made his fortune in asset management and through buying and selling radio stations, real estate, and art—collects vintage Rolexes and Patek Philippes, but he had no professional experience with watches. Nevertheless, he answered the designer’s plea and assumed control of Ikepod primarily because he admired Newson’s work, which, in addition to watches, includes household objects, a concept car, the interior of Manhattan’s Lever House restaurant, and the Kelvin 40 aluminum personal jet. Newson became a minority partner in the venture along with Ikepod’s COO, Pierre Halimi Lacharlotte, a 44-year-old Miami-based watch industry veteran who also distributes DeWitt and F.P. Journe in the United States.

Before relaunching Ikepod this year, the trio upgraded the existing complicated Hemipode and Megapode models; developed the more basic Horizon, a new design; and contracted production of these watches to Chatelaine, the Chanel-owned factory in La Chaux-de-Fonds, Switzerland, which manufactures the ceramic Chanel J12 timepiece.

Like those of the Hemipode and Megapode, the elliptical case of the Horizon is a lozenge made of 18-karat gold, platinum, or titanium. The watch’s name and design reference the event horizon, an astrophysical term for the edge of a black hole, where light disappears and properties of time and space are altered. The Horizon’s dimpled dial appears to be convex, emphasizing the case’s unusual form. Ikepod is offering black titanium (Black Hole) and gray titanium (Gray Matter) versions of the watch, each of which is limited to 66 pieces. This is a considerable number, since the company produced a total of only 400 watches this year. Next year, production will increase to about 600 and will include the new Solaris, a truly reversible, avant-garde model with a two-faced ceramic case and a yellow gold mesh bracelet reminiscent of designs from the 1970s. “You can flip the whole thing over,” says Lacharlotte.

Appropriately enough, Ikepod will unveil Solaris and its other new inventions at December’s Art Basel Miami Beach. During the art show, an even more profound expression of Newson’s interest in time and space will be on display: his concept for the Astrium, a rocket that would carry travelers into space for three minutes before returning them to earth.

Lindemann and Lacharlotte acknowledge that Ikepod’s eccentric designs do not appeal to a general audience, which may explain why they first offered the watches only to certain art collectors. Like a work of art, an Ikepod watch can provoke admiration or derision; it might cause some to scratch their heads, while others cannot live without it. “In the art world, opinions are constantly changing,” writes Lindemann in the introduction to Collecting Contemporary, his 2006 book about art collecting. “Today’s genius could be tomorrow’s embarrassment. So if you buy it, buy it because you enjoy it.” That’s prudent advice in any realm.