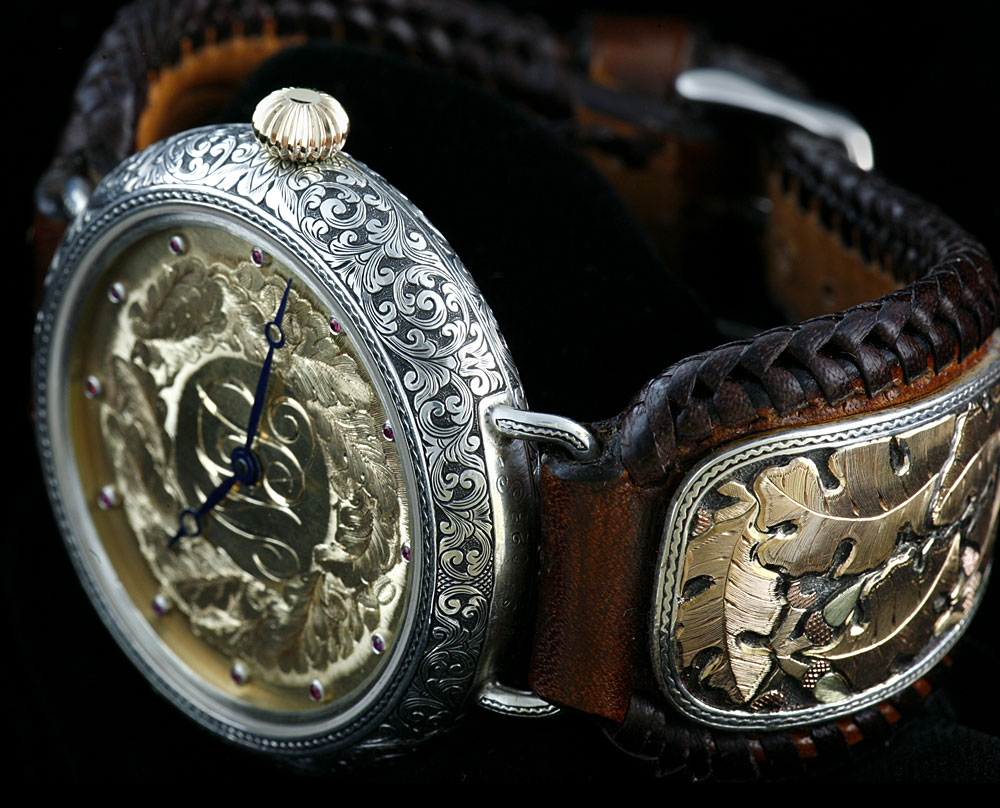 When Colorado businessman (and avid fly fisherman) Kip Dellinger glances at his watch, he sees not only the time, but also a trout leaping from a stream to chase a mayfly. The scene’s backdrop, the sunlit San Juan Mountains scalloping the horizon, re-creates the view from Dellinger’s backyard. From a photograph of Dellinger’s mountain vista and with an understanding of his client’s interests and wishes, Jeffrey Nashan, owner of the Montana Watch Co. in Livingston, Mont., created this timepiece for Dellinger.

Nashan, a 44-year-old who grew up in California and used to restore vintage watches, founded the Montana Watch Co. in 1998. His collection consists of six different models, all based on early-20th-century American watches. He explains that between World War I and World War II, watch styles changed rapidly because of advances in machining. “I love those transitional time periods, when beautiful styles appeared too briefly,” Nashan says. “I want to bring them back.”

Nashan’s watches are assembled in-house, and the engraving, gem setting, and leatherwork are all completed by independent artisans. Though the movements are Swiss (primarily ETA), Nashan rebuilds each one. He cleans, oils, and tunes them. Then he decorates the parts with engraving, bluing, and plating. Nashan says that he hopes to gain the capability to produce his own basic movements in the near future. About 80 percent of the Montana Watch Co.’s clients request custom pieces. For Dellinger, Nashan built a rugged Bridger Field Watch, a round model named for 19th-century Western pioneer Jim Bridger. Chris DeCamillis, an Italian-schooled artist from Michigan, engraved the dial in the Bulino style, an Italian technique using tiny dots and lines to create scenes that look like photographs. The image captures striking nuances, such as the contours of the mountains and the eye of the trout. Wyoming artist and horse trainer Ernie Lytle, who apprenticed under a master engraver for the Winchester gun company, made the deep, chiseled cuts in the sterling silver case, employing the Western single-point style of engraving. For the hour indicators, Nashan chose gold squiggles, except for the 2 o’clock marker, which, in 22-karat gold, depicts the mayfly about to be snatched up in the fish’s mouth.

Not all of the custom watches are made by Nashan and his colleagues. For her husband’s birthday, one client’s wife packed his suitcase and handed him a plane ticket to Montana so he could work with Nashan to build his own watch. Montana Watch Co. stopped production for four days while the client constructed his Highline Aviator, which is modeled on early aviator watches. He disassembled, cleaned, oiled, reassembled, and adjusted the movement, which comprised more than 130 parts, some the size of a mustard seed. “I held his hand, but not his screwdriver,” says Nashan with a chuckle. After bluing the titanium case with a butane torch, the client cut and fit the stem to the crown and installed the dial and hands. On the last day, he fitted the crystal and placed the movement in the case. To finish his piece, he performed a final regulation of the movement and fitted the strap and buckle.

“People have been inundated with mass-produced watches and want something handmade that has a story behind it,” says DeCamillis, one of five independent master engravers, each a specialist in a different style, who work with Nashan. There is no need to explain that to Kip Dellinger, who, with a momentary look at his watch, is virtually transported from the boardroom to a Colorado stream, wading chest-deep in an eddy of cold, crystalline water.