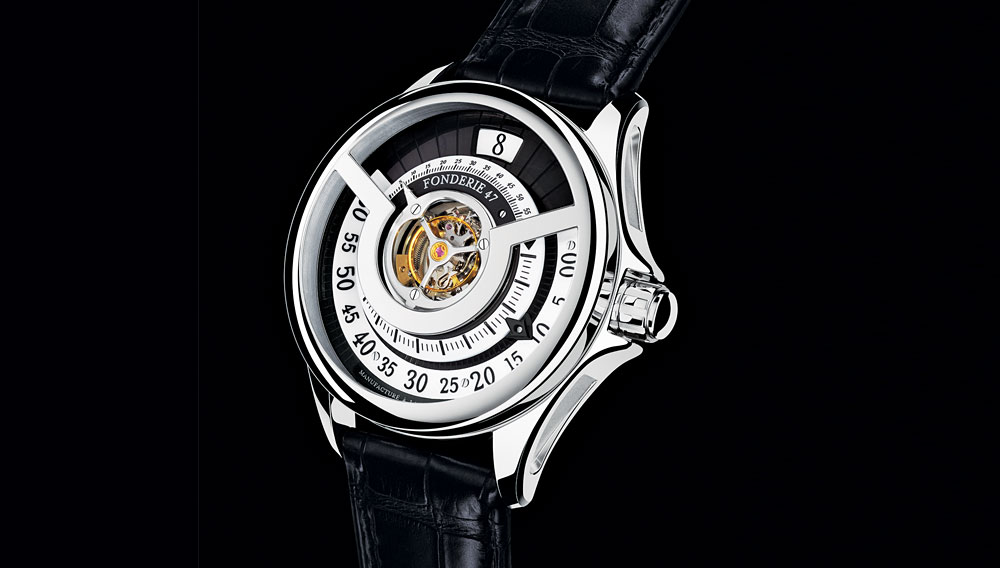 “From the very beginning, we wanted to create a watch on our own, without relying on another brand,” says Peter Thum, a socially concerned entrepreneur whose 4-year-old enterprise, Fonderie 47, creates fine jewelry—and now timepieces—to fund a reduction in the number of assault rifles present and used in conflicts throughout Africa. “The hard part was biting the bullet to make a new invention.”

Like many neophytes in watchmaking, Thum found the industry at once fascinating and exasperating; moreover, he faced the added challenge of being an outsider with an unusual philanthropic mission. “The industry is sheltered and cloistered, in that everyone knows each other,” he says. “We met with most of the small, independent watchmakers, who all understood how difficult it is to do what we are trying to do.”

Thum, however, had more luck than many parvenus who, in their efforts to gain entrée to horology’s inner circles, frequently confront the industry’s tightly closed ranks. In 2009, many of the potential partners he approached were coping with diminishing orders as a result of the global economic downturn; one of them, David Candaux—who was among the chief talents behind Jaeger-LeCoultre’s Hybris Mechanica series of super watches—had recently set up shop on his own. In collaboration with the designer Adrian Glessing, Candaux agreed to work with Fonderie 47 in realizing its ambition of engineering a watch that related to the humanitarian mission of the brand.

Equipped with a central three-minute flying tourbillon, jumping hours, and retrograde minutes, the $350,000 Inversion Principle can easily hold its own with other complicated watches in its class. However, in the context of its higher purpose—each watch in the 20-piece edition will fund the destruction of 1,000 assault rifles—the model assumes a nobler stature. The development team made a conscious decision to forgo any overt visual references to firearms, save for a single dot of forged gunmetal fused to the movement’s baseplate. “The design needed to contravene most people’s idea of a gun-related watch,” says Thum, who is quite familiar with the technical ingenuity that informs this timepiece’s mechanical nemeses, the AK-47 and other assault rifles. “The AK-47 is an industrial weapon intended to span the globe,” he notes. “We wanted to take that very clever, elegant, but awful device and turn it into something akin to a Stradivarius—completely the opposite type of human achievement.”