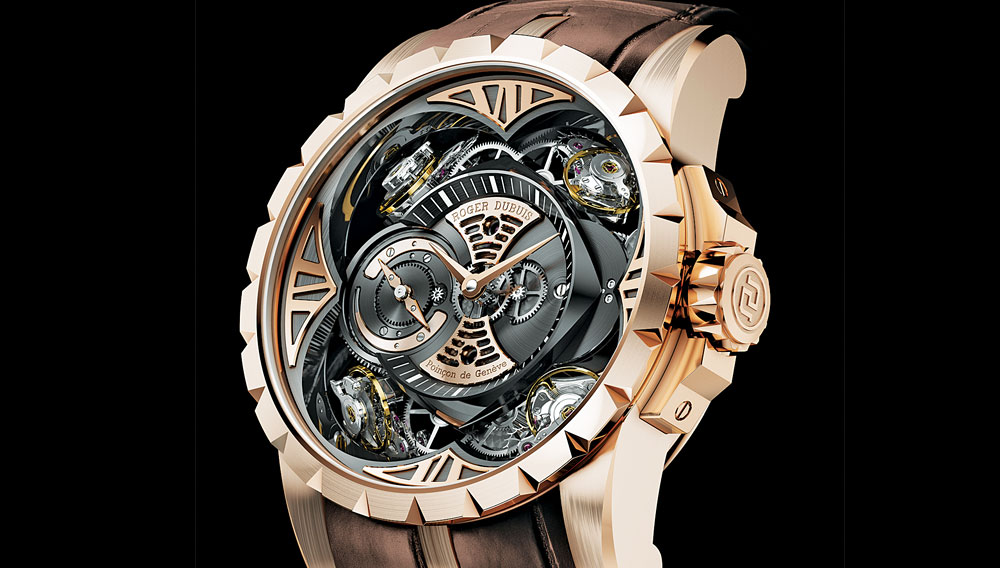 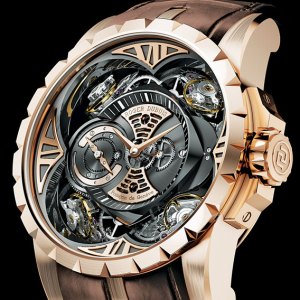 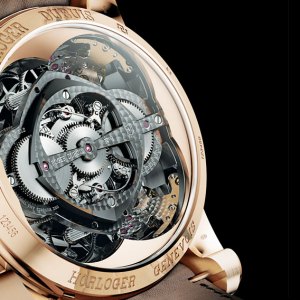 As he digs through a shoebox filled with spare parts, the genial and relaxed Gregory Bruttin—a movement developer at the Geneva watch manufacturer Roger Dubuis—bears little resemblance to the conventional image of the fastidious watchmaker. Not surprisingly, his latest creation also defies stereotypes: The Excalibur Quatuor, an enormous timepiece sporting no less than four beating balance wheels, looks at first glance like a piece of watchmaking excess from a few years ago, when the consumer penchant for expensive novelties spawned a slew of spurious complications, especially from newer brands. Yet further inspection reveals that form defers to function in Bruttin’s newest brainchild.

“The most important step in creating this piece was the work we did seven years ago on the Double Tourbillon,” says the developer. “It took a long time to make it work, but it showed that, with a differential, we could successfully average [the rates of] two [timekeeping elements] to improve accuracy.”

With the Quatuor (priced at about $370,000), Bruttin extended this concept by essentially removing the tourbillon mechanisms and replacing them with four timekeeping elements that contribute to the average time displayed by the hands. The vibrations generated by the Quatuor’s four balances, however, prevented the watchmaker from using conventional instruments to regulate the timepiece (a process that involves adjusting its running rate to enhance precision). Instead, he made his measurements using an improvised optical system, which registered huge variations in the balance wheels’ rates—the last thing most watchmakers want to see in a watch they are regulating. Yet in the case of the Quatuor, these discrepancies contribute to the overall design, which has achieved greater accuracy than certified chronometers. “We found the differential works best when there is a little slop in the gears,” explains Bruttin. “It works a little like an automobile that oversteers and understeers to find the right direction.”

Bruttin’s paradoxical approach to improved chronometry is much more than a mechanical curiosity. Since being acquired four years ago by Richemont, the massive Swiss holding company, Roger Dubuis has endeavored to increase the reliability of its watches without sacrificing the extravagant style for which it has become so well known. The Quatuor, which elegantly marries the brand’s eccentric spirit with creative mechanics, should entice many collectors to investigate once again this boldly original brand.