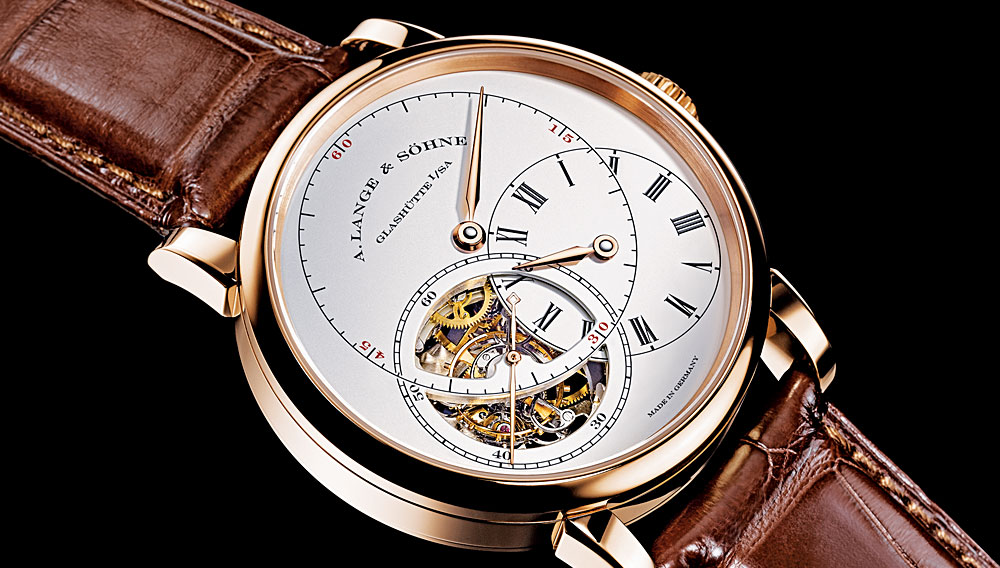 Unadorned functionality has remained the guiding principle of modern German watch design ever since A. Lange & Söhne helped to revive the tradition in the mid-1990s; yet the industry’s newly reemerged preference for function over form has drawn a certain amount of criticism from observers. Perhaps in response to this perception, the usually staid, Glashütte-based company has introduced an element of whimsy to some of its more recent watches. The movable dial on the new Richard Lange Tourbillon “Pour le Mérite,” for instance, is the horological equivalent of a lace garter. This feature does serve a functional purpose: A section of the dial retracts when the hour hand strikes 12 o’clock, exposing the entire tourbillon mechanism, and snaps back into place as the hand strikes 6 o’clock. But the design’s operational flourishes and titillating view of the movement clearly trump its utility.

The Richard Lange Tourbillon, however, is not the first timepiece from A. Lange & Söhne to exhibit the house’s imaginative flair. In 2009, the company’s new product development team, led by Anthony de Haas and Tino Bobe, startled watch collectors with the Zeitwerk, an unusual digital display driven by a mechanical movement. Since then, the team has continued to uphold Lange’s reputation for practicality and quality while, at the same time, creating watches that convey a sense of the unusual.

In recent years, the company has enhanced its capabilities in the development of chiming mechanisms, such as minute repeaters, through its restoration work on a turn-of-the-century Lange grand complication; Bobe and de Haas decided to incorporate one of these vintage-inspired complications into their most modern watch. “For our first entry into the field of acoustical watches, I think most people expected something traditional, like a three-hand watch,” says Bobe, the company’s director of research and development. “Our priority was to generate a positive surprise.” The result of their labors is the Zeitwerk Striking Time (priced from $90,800), a sonnerie au passage that neatly transfers some of the energy stored for digital display disks to the chiming system, which sounds the passing hours and quarters.

A similar historical twist informs the aperture and movable dial on the Richard Lange Tourbillon “Pour le Mérite” (priced from $175,600). The three-circle regulator layout of the dial is borrowed from a design by 18th-century German watchmaker Johann Heinrich Seyffert, who would recognize not only the exterior of the new piece but also the spirit of its inner workings. “Everyone on our team knows we don’t want to create useless complications,” says Bobe. “It is much more challenging to design within the parameters of our brand.”