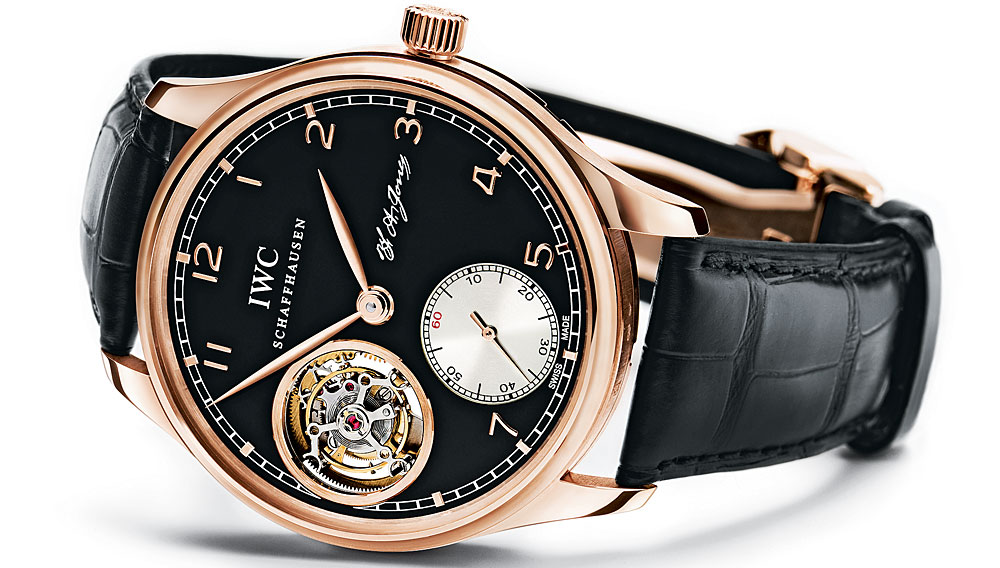 ‘‘It’s something of an experiment,” says Stefan Ihnen of the latest tourbillon movement released by IWC. The Tourbillon Hand-Wound, which was recently added to the company’s Portuguese watch line, combines high-quality watchmaking with the clean lines collectors desire. But more importantly for the 36-year-old Ihnen, who has served as head of IWC’s movement research and development department since 2006, the high-precision design—still a rarity among tourbillons—represents the company’s first step in a new creative direction that he helped to establish.

The movement deployed in the Tourbillon Hand-Wound ($53,500) is based on a 1930s IWC pocket-watch design that was adapted for the original Portuguese wristwatch in 1939 and reproduced, beginning in 1993, for modern Portuguese reeditions. Ihnen saw in the mainspring and balance of these movements the potential to create a contemporary timepiece. To improve accuracy, he eliminated the large, slow-beat balance wheel and installed a modern tourbillon cage that, thanks to a surplus of power, can be driven at the relatively high frequency of 28,800 vibrations per hour. He also replaced the index system—which allows watchmakers to control the speed of the watch easily—with adjustable screws along the rim of the balance wheel. This so-called free-sprung balance, though more accurate than the index system, is much more laborious to adjust.

Ihnen’s specifications for the Tourbillon Hand-Wound movement reflect many of the modifications he has made to IWC’s production of regular in-house movements. The chronograph movement he designed in 2007 also incorporated a free-sprung balance; since then, he has adapted this feature to higher-volume movements such as the 5000 series calibers inside the Big Pilot’s Watch. This shift is significant for a company that manufactures a relatively large number of watches. (IWC’s overall production is rumored to approach the six-figure mark.) An entire department is now dedicated to adjusting these mechanisms for greater precision.

For Ihnen, this new direction also has personal implications. His predecessor, Kurt Klaus, achieved recognition as an industry giant by democratizing high-level complications. Klaus created a never-before-seen combination when he attached an ingeniously simple perpetual-calendar mechanism to the rugged and widely available ETA 7750 chronograph movement. The resulting Da Vinci watch, for its functionality and attractive price, brought fame (and some notoriety in purist circles) to IWC. Ihnen’s upgrades to in-house calibers mark a 180-degree alteration of course for the company—one he believes is particularly suited to the times. “Kurt Klaus created good [mechanical watchmaking] solutions after the quartz crisis,” notes Ihnen. “Today collectors are much more sophisticated, and we are adding value and precision to our own movements accordingly.”