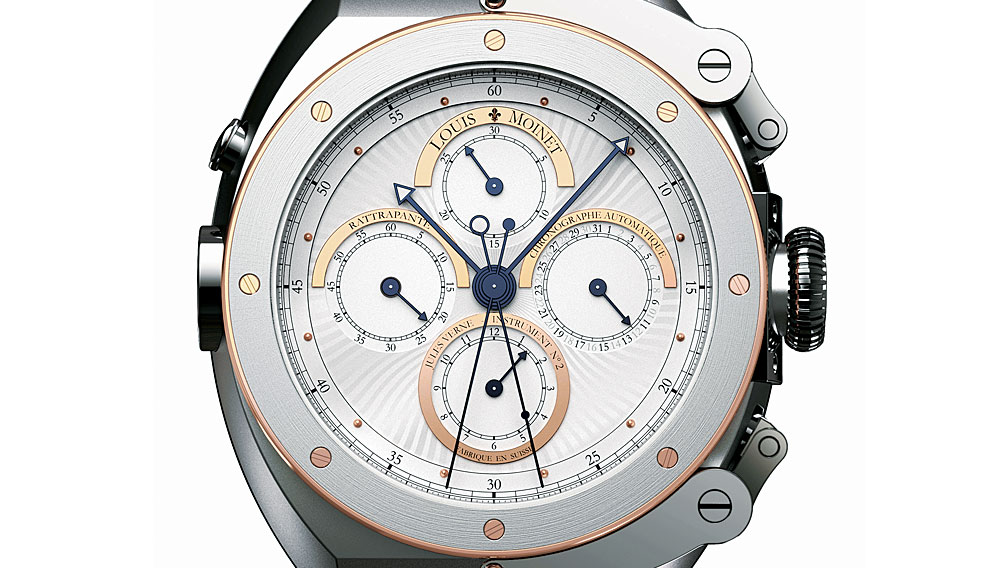 Watch-industry veteran Jean-Marie Schaller began selling timepieces under the Louis Moinet marque in 2003. “It was [renowned watchmaker] Daniel Roth who originally suggested that the Louis Moinet name would make a good basis for a watch brand,” Schaller says.

Yet Roth’s suggestion posed a challenge familiar to many contemporary watchmakers who have tried to capitalize on the craft’s past. Moinet, a collaborator and intimate of the legendary horologist Abraham-Louis Breguet, was unquestionably one of the leading lights of 19th-century watchmaking. But his surviving work offered few threads upon which Schaller could build a coherent collection of modern wristwatches. And, to his credit, Schaller did not attempt to revive obscure historical details of Moinet’s watches and clocks. He opted instead to create a line reminiscent of the master’s work, though thoroughly contemporary. “Much of his work clearly belongs to another age,” Schaller explains. “But Moinet had a flair for design, and I felt this would allow me to build watches that were modern in conception.”

Schaller also realized that, as a small watch manufacturer with limited capital, he would need to create a bigger impact in the market by emphasizing the beauty of a watch’s exterior, as well as the mechanics of its interior. Louis Moinet, like many boutique watch houses, relies on high-quality movement suppliers and complication specialists for internal mechanics. But a look at the beautifully finished dials and extraordinarily complicated and original cases quickly reveals the considerable time and effort Schaller spends on design. For instance, all Moinet watches have dials with a deeply etched Côtes du Jura pattern that accentuates the finely finished appliqué numerals and registers. Additionally, the Tempograph features a visible retrograde seconds mechanism that seems to be built into the dial, and the Jules Verne timepiece incorporates an interesting set of levers to operate the chronograph pushers.

Schaller accomplishes these aesthetic feats by nurturing his watches’ designers, movement makers, and case makers. Indeed, through this collaborative arrangement, one of his case-maker partners, Bernard Goudron, has executed extremely complex and finely finished pieces. While Schaller says that ultimately all of the watches come from his imagination and from the imaginations of his partners, he still sees a stylistic and creative link to Moinet.

“Many of Moinet’s clocks contained external mechanical features like a rotating moonstone on a calendar hand,” he says. “The case is not just a frame on a painting. It is part of the mechanical art.”