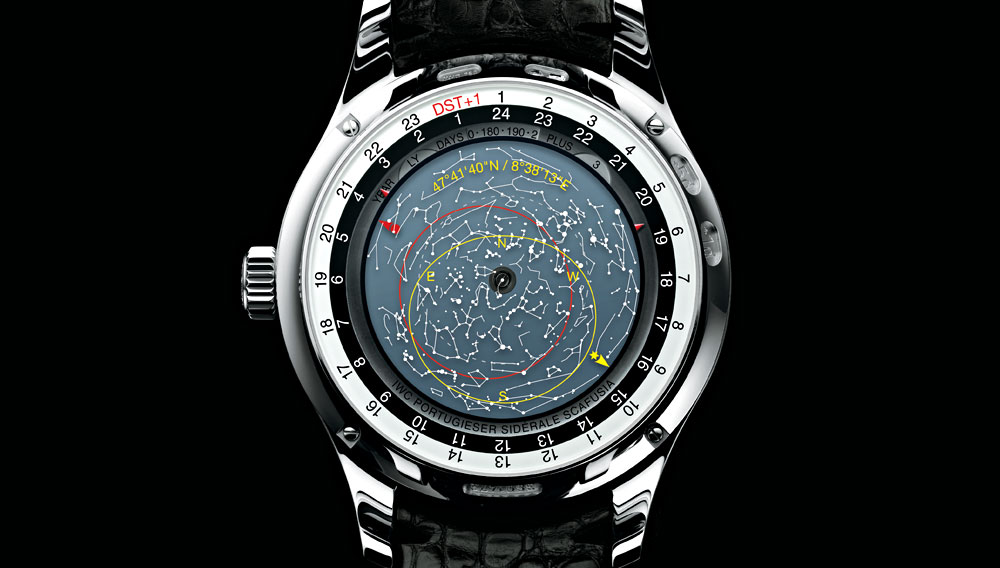 The most complicated and expensive timepiece to issue from the doors of IWC Schaffhausen has a deceptively simple face, featuring a large tourbillon cage that gently rotates in one-second increments thanks to a constant-force device. “When we started this project, the idea was to make a horologically pure tourbillon,” says Mario Klein, a product manager for the watchmaking firm, which is located on eastern Switzerland’s German frontier. “But then we decided to add something, and that led us to the watch we have today.”

That watch, the Portuguese Sidérale Scafusia, is the first astronomic timepiece the company has attempted. The reverse side of the rather sober-looking case reveals an intricately detailed star chart that tracks sidereal time (the progress of the stars across the sky) and the times of sunrises and sunsets—all calibrated to the geographic location of the owner.

Yet the Sidérale is distinguished from previous IWC high complications by more than its degree of complexity. Though the company has developed numerous well-regarded mechanisms in the past, including chronographs and perpetual calendars, its top-level watches have employed third-party movements and easily assembled complication modules, which collectors and enthusiasts do not esteem as highly as wholly original designs that are integrated as complete units. The Sidérale, whose movement consists of two parts, breaks this somewhat limiting pattern. The new model was completely designed and engineered in-house over a 10-year period, and like many of IWC’s more recent advanced watches, it incorporates the highest-quality components, such as its large-scale, free-sprung balance with a Breguet spring.

No doubt IWC’s ability to customize each Sidérale, along with the watch’s exclusivity (only five to seven pieces will be released each year) and its unusual exterior features—such as the ingenious day/night indicator that utilizes polarization to lighten or darken the star chart—will draw collectors to this unique model. Nevertheless, the most impressive aspect of the watch is the fact that its accuracy, displays, and perpetual-calendar mechanism all support its purpose as an astronomic timepiece. The Sidérale’s price tag of 750,000 Swiss francs (nearly $1 million), however, will require it to compete in the marketplace with some truly stellar horologic creations. “We know the other watches in the category,” says Hannes Pantli, a longtime IWC executive and a member of the company’s board of directors. “We took pains to make sure this watch not only had the function, but [also] understated, masculine aesthetics that are hard to find in watches at this level.”