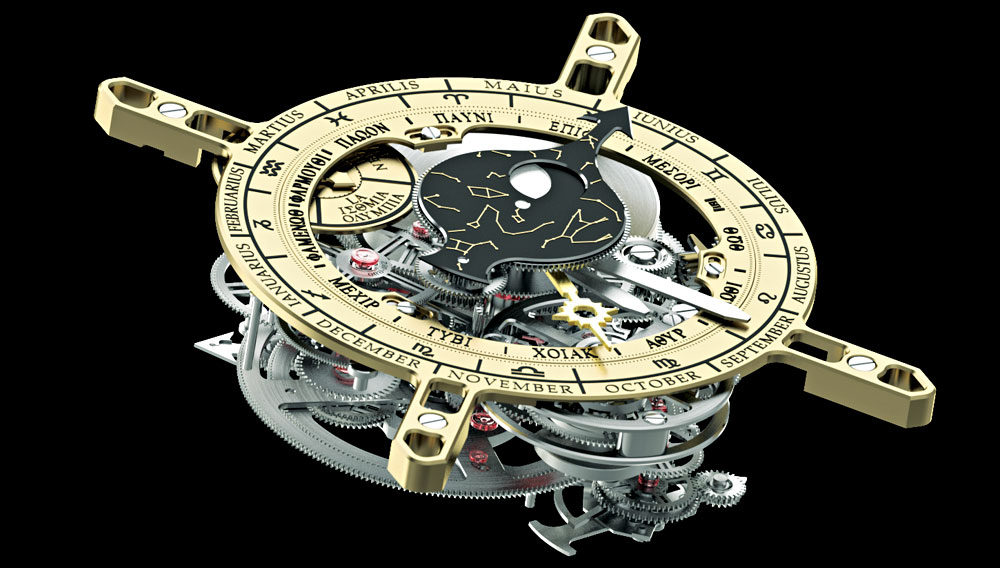 “It is inconceivable that a man with my professional background and experience would not jump into it,” says Hublot technical director Mathias Buttet. “He would be crazy not to fall in love with it.”

Buttet—who for years ran one of the watch industry’s leading complication specialty shops, BNB Concept—refers to his own inspiration to produce a wristwatch based on the principles of the Antikythera mechanism, a device with such a strange and compelling history that one wonders how the Swiss watch industry’s mechanical mavens failed until now to explore the rich possibilities it presents.

In 1901, divers investigating an ancient wreck off the Greek island of Antikythera discovered what appeared to be part of a gear wheel. As the salvagers collected additional fragments, experts initially speculated that these pieces belonged to some kind of astronomic clock; this hypothesis, however, was quickly dismissed when other artifacts associated with the wreck were found to date from approximately 150 BC to 100 BC, a period then considered too early for such an advanced design. Yet by the second half of the 20th century, improved methods of analysis revealed that this first assessment of the recovered components was in fact quite close to the truth, and that the prevailing views concerning the mechanical sophistication of the ancients were in need of considerable revision. A full deconstruction of the mechanism appeared in a 2008 edition of the scientific journal Nature; this study first brought the subject to Buttet’s attention. “It is not actually a clock,” says the horologist. “It is a calculator that tracks the motion of the moon, sun, and planets. Incredibly, it can calculate several ancient calendars, as well as eclipses and the times for the ancient Olympic games.”

Although several working models of the Antikythera mechanism have been built—including one made entirely from Lego Technic—Buttet’s is the first to take the shape of a sophisticated timepiece. Anticythère, to be released in the spring of 2012, couples a tourbillon movement with a double-sided dial to display the large quantity of astronomical information that Buttet’s model of the mechanism generates. Not only is the watch technically impressive, but it also possesses a character and heritage substantially different from that of any product of traditional complicated watchmaking. “This entire industry is based on 500 years of technology,” says Hublot CEO Jean-Claude Biver with a measure of satisfaction. “Now, Hublot will cover over two millennia.”