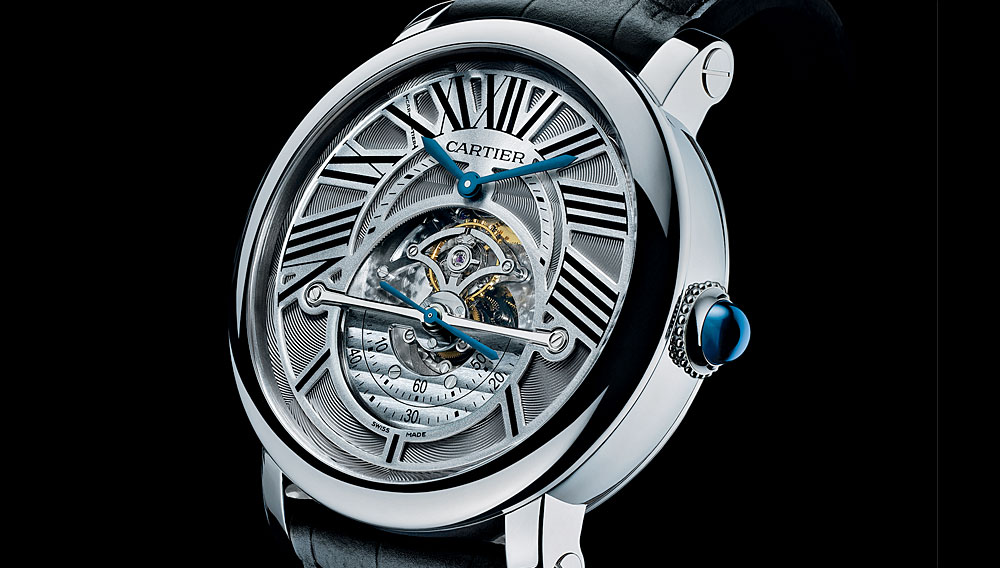 As a small group gathered in one of the formal private rooms of the Cartier mansion on Fifth Avenue in New York City last November, a rather informal comment suddenly issued from one of the far corners: “She has a blank check,” announced a male voice. Surprised heads turned to discover that the speaker was North American brand president and CEO Emmanuel Perrin, and the recipient of this carte blanche was movement developer Carole Forestier, who was about to unveil her latest creation. Perrin’s remark would have passed without notice at most companies, but in the highly disciplined culture of Cartier, where the brand itself is the star, the singling out of any employee—even the widely recognized Forestier—is a rarity.

So, for that matter, is Forestier’s new watch, the Rotonde de Cartier Astroregulateur ($335,000), which will be available this fall. This unorthodox timepiece appears conventional at first, yet closer inspection reveals that the balance and escapement—the timekeeping elements of the watch—are mounted on the swinging winding rotor. In the era before Forestier, Cartier would steadfastly have avoided this risky configuration, which straddles the line between gimmickry and genuine horologic innovation.

Forestier’s design gamble, however, rests on a foundation of careful reasoning and research. “We were looking for ways to reduce the positional errors inherent in mechanical watches without actually making a tourbillon,” she says. “In looking at all the components in a watch, the one with the least amount of position change is the rotor.” Her concept cleverly eliminates many of the different vertical positions experienced by the timekeeping element, thereby reducing gravity’s negative impact on accuracy. Because the weight of the micro-rotor always brings the balance back to the same vertical position, it makes adjusting the watch for precision that much easier.

In addition to these chronometric improvements, Forestier developed a double differential, situated at the heart of the watch, that allows the rotor to move freely without disrupting the transfer of energy from the winding barrels on the fixed portion of the movement to the escapement, which is attached to the rotor. For the sake of gear efficiency and to minimize torque, Cartier mounted the seconds wheel on the rotor as well, and the seconds hand also is set in the center of the frontally mounted rotor.

Cartier’s unveiling of this slightly peculiar 50-piece limited edition before a roomful of VIPs certainly speaks to Forestier’s unprecedented star status at the jewelry house. The firm’s confidence in her abilities appears to be well placed. The chronometric performance and design of the Astroregulateur represent a true technological shift for the brand and leave little doubt that the watch has disproved the old industry saw that suggests there is nothing new left to be done in the realm of mechanical watches. “This time,” says Forestier, “I think we have made something really different.”