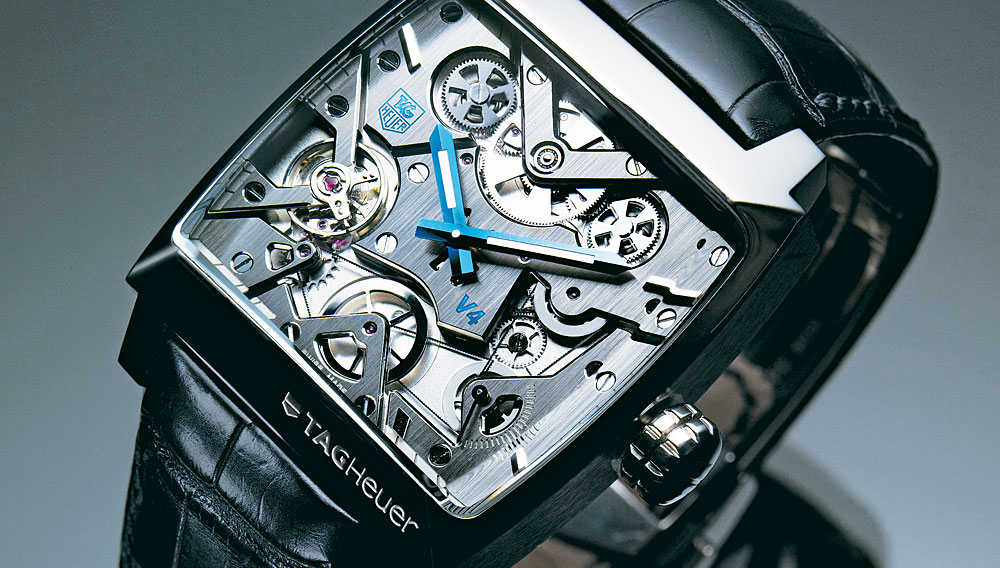 Of the scores of concept watches introduced with great fanfare over the past few years, many have never actually functioned as advertised. The ambitious and unorthodox Monaco V4 prototype that TAG Heuer unveiled in 2004 is perhaps the most conspicuous of these. Collectors and industry watchers have waited impatiently for the company to bring this daring timepiece to market. “When I walked into a bar here in La Chaux-de-Fonds, that watch was all anyone wanted to talk about,” says Thomas Houlon, TAG Heuer’s brand director. “It’s as if I had ‘V4’ tattooed on my forehead.”

After five years of laborious reengineering and tinkering, Houlon and his team may finally be able to give the people what they want: A fully functional V4, priced at $80,000, is scheduled for release this fall in a limited edition of 150 pieces.

Housed in the company’s square-shaped Monaco case, the V4 is a bold step for TAG Heuer. Not only is its five-figure price tag far higher than those of the sports watches the company has built its reputation on, but its advanced movement rejects many long-established principles of watch construction. The automatic winding system is driven by a sliding weight instead of a rotor, and the traditional power train of geared wheels has been replaced by a system of flexible belts, similar to those used in a car engine.

During the V4’s drawn-out development process, these belts proved to be the most problematic element in the whole design. TAG Heuer started working on the belt concept in 2002, when it engaged the consulting services of Geneva-based specialty watchmaker Jean-François Ruchonnet, who originally came up with the idea. But two years later, when the company showed a non-functional prototype to the press, a number of fundamental problems remained. Testing on the durability of the system was far from complete, and the smallest of the belts, which was supposed to link the escapement with the rest of the movement, defied all of the engineers’ attempts to make it work. “When we first approached the problem, we found that this belt was at least 10 times smaller than anything that then existed,” Houlon says. “Conventional manufacturing techniques simply did not work.” In fact, the company wasted countless months with expensive and unwieldy injection molds only to have the belts fail under stress. Eventually a radically different laser-cutting technique delivered a workable belt from a sheet of polymer.

Nevertheless, these long delays fed industry rumors that the project had failed. The ordinarily mild-mannered Houlon bristles at this, insisting that delays, even long ones, are part of the process of creating a concept watch. But now, with a functioning V4 on his wrist, Houlon has reason to smile. The V4 undertaking will yield more than a few dozen satisfied collectors. “The engineering capability we built with this project is the reason we will be able to introduce our own chronograph movement next year, as well as a few other projects in the pipeline,” he explains. “The toy box is now full.”