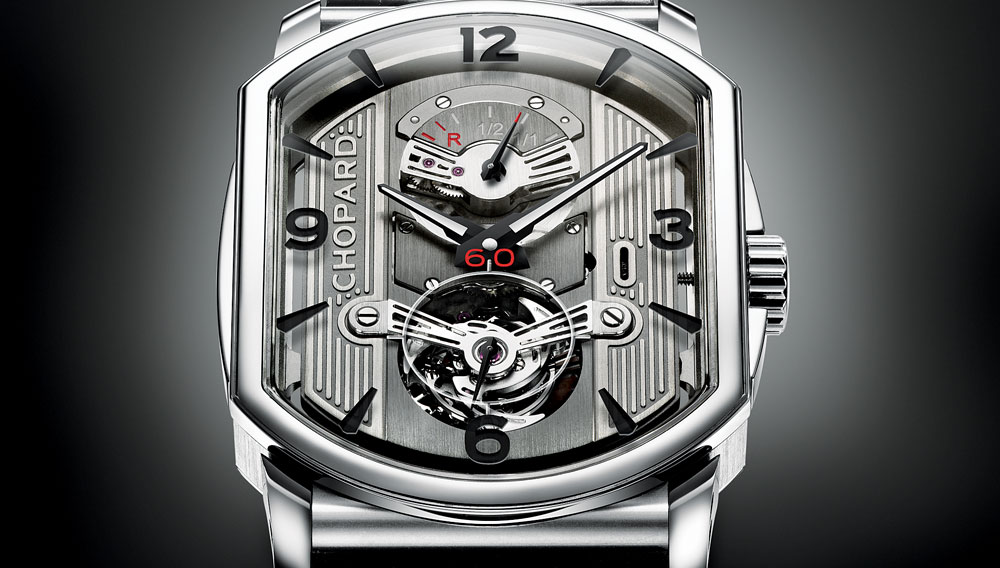 ‘‘This is really the first time we have used the movement as an important part of the design of the watch,” says Chopard copresident Karl-Friedrich Scheufele of Engine One, one of four new timepieces in the company’s men’s collection L.U.C. The most unusual watch Chopard has ever built, Engine One—which incorporates a tourbillon movement shaped like an engine head suspended between sapphire crystals—has raised the brand’s reputation for technical sophistication to a new level. “[Engine One],” says Scheufele, “is pointing to where a part of our collection could go.”

The launch of these new models happens to coincide with the brand’s 150th anniversary. A more significant milestone, however, may have been in 1996 when Chopard officially opened as a manufacture and began creating not only watches but also the movements that drive them. In the 14 years since, the company has made startling progress, releasing well-received classical movements and mechanical complications. Indeed, aesthetics, rather than technical virtuosity, proved to be the brand’s major challenge during this period, when plain and elaborate decorations were applied indiscriminately to both simple and highly advanced models without any clear visual delineation of product families.

This issue has been rectified in part by designer Guy Bove, whom Chopard hired away from IWC in 2008. Without radically redefining L.U.C., Bove has introduced new details that make the mechanically diverse collection into a coherent blend of classical and contemporary styles. His influence is evident on the cases of the 1937 and the more complicated All in One, both of which sport a new crown design, crisp dial details, and a groove that travels around the bezel and through the lugs, making the timepieces, in Bove’s words, appear to “hunker down on the wrist like a tarantula.”

Other L.U.C. models include the oversize Louis-Ulysse the Tribute—a pocket watch that converts to a wristwatch with a claw system—and, of course, Engine One, Chopard’s first venture into interpretive movement design. It was Scheufele, a noted car enthusiast, who provided the concept for Engine One, but his design team was working in a viable direction after just the first few sketches. Engine One is a work of fantasy, yet it incorporates clear and logical ideas, such as its in-line display layout, that contribute to its engine motif. Scheufele points to this effort as a natural evolutionary step in the development of the brand as a true manufacture. “Part of our organization will continue to produce conventionally dialed watches, but more of our work for L.U.C. will be devoted to this.”