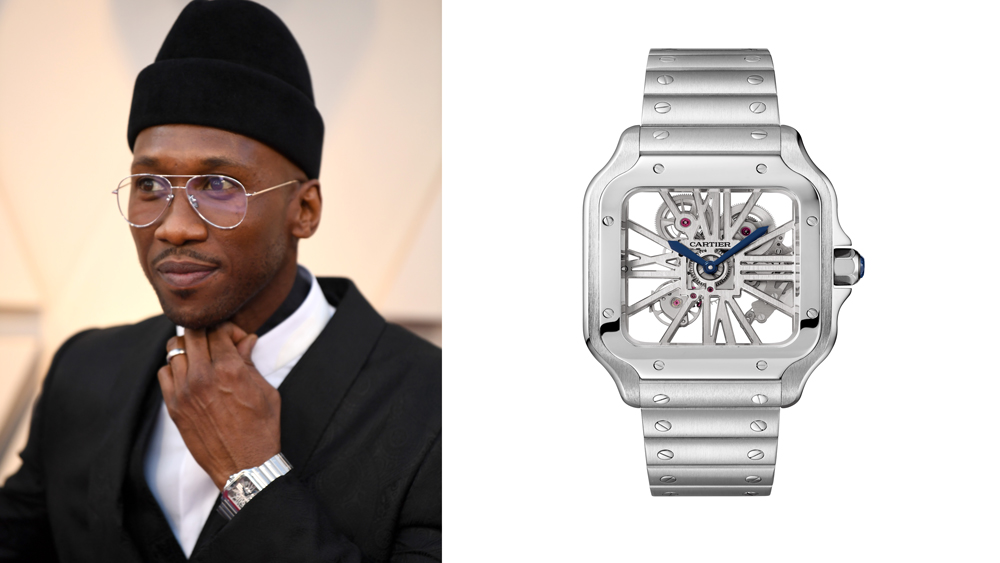 For many of last night’s big winners, their Oscars marked once-in-a-lifetime moments and a few Academy Awards historical firsts, so what better way to mark the occasion than with something to celebrate those golden hours? Save for a few interesting cases, the guys on the red carpet mostly played to the classics with elegant timepieces that accompanied both traditional and out-there tuxes. Rami Malek wore another Cartier to mark his second big win as Best Actor for Bohemian Rhapsody, Spike Lee played it cool with a Jaeger-LeCoultre Reverso, but adventurer and director Jimmy Chin appropriately opted for a sporty Panerai. And Ryan Seacrest’s lustworthy gold Rolex Daytona Ref. 6263 made a follow-up appearance with another aubergine tuxedo after its red carpet debut at The Golden Globes.

Here are all the watches on the wrists of Hollywood’s leading men.

At The Golden Globes Rami Malek wore a Cartier MC Tank in steel and took home the award for Best Performance by an Actor in a Motion Picture Drama and got to celebrate the film’s win for Best Motion Picture Drama for Bohemian Rhapsody. He wore another Cartier Tank to last night’s Oscar awards, this time he opted for a Cartier Tank Américaine ($5,750) in steel. The Tank proved, once again, to be his good luck charm—Malek took home the Best Actor in a  Leading Role award for his role as Freddie Mercury.

Christian Bale, nominated for Best Actor in Vice for his portrayal of Dick Cheney, lost out to Rami Malek for the award—although Cartier wisely had two of the top nominees wearing their timepieces. Bale, who rarely flashes his watches beneath his perennial all-black tuxedos, was apparently wearing this blue dial Santos de Cartier in steel ($6,850).

Michael B. Jordan in a Piaget Polo Tourbillon

Funnily enough, Jordan switched out of his black tux and into a double breasted marble patterned grey suit for the Vanity Fair after party that would have gone perfectly with Piaget’s brand new grey Altiplano Meteorite dial timepiece, but who can blame him for wanting to wear the diamond studded tourbillon instead?

Both the men and the women of the Crazy Rich Asians cast were among some of the best-dressed of last night’s red carpet. The cast’s leading man Henry Golding off-set his very formal (and very sharp) Ralph Lauren Purple Label velvet peak lapel tuxedo with a simple IWC  black dial Portugieser Automatic ($12,700). The watch features a 7-day power reserve indicator with a date display, a Pellaton automatic winding system, a small hacking seconds and an 18-carart gold medallion rotor visible through the case back.

Rudd followed suit with the same IWC Portugieser timepiece as Henry Golding, but with a blue dial ($12,700) to match his navy blue Canali three-piece tuxedo. In a year in which IWC has been focusing heavily on its sportier Pilot’s watches, both men make a compelling case for IWC’s dress watches.

To top off his turquoise velvet tux, Chris Evans chose a slate dial IWC Portugieser Chronograph ($16,600) with vertically aligned subdials. The watch comes with an 18-carat 5N gold case and arabic numerals and has 44 hours of power reserve. Evans wasn’t up for an award last night—but he struck gold on the red carpet. Steel or white gold would seem like the obvious choice for a turquoise tux, but the gold case stood and was ultimately a nice contrast to his bold jacket choice.

Jimmy Chin, along with his wife and co-director Elizabeth Chai Vasarhelyi, took home the Oscar for Free Solo. The adrenaline pumping documentary follows free climber Alex Honnold’s summit of Yosemite National Park’s 3,000-feet-high El Captian mountain—sans ropes. Incredibly, Honnold survived the mind boggling feat and Chin—also an accomplished climber—was there to capture it at every altitude. Fittingly, Chin chose a sportier model to wear with his tux. The climber and director wore a Panerai Luminor 1950 GMT ($8,700), which not only allows for a second time zone for the man on-the-go, but also features an Incabloc anti-shock device—in the event that Chin didn’t survive his harrowing documentary, his watch likely would have kept on ticking.

Spike Lee in a Jaeger-LeCoultre Reverso

Even though Spike Lee’s purple suit (a tribute to Prince), his gold Air Jordans, and his gold “Love” and “Hate” knuckle rings took center stage last night, it’s worth pointing out that the acclaimed director—and now first-time Oscar winner as Best Director for BlacKkKlansman—wore a rather classic timepiece. Beneath all of his flashy attire, the director wore a Jaeger-LeCoultre Reverso Classic Large Duoface Small Seconds timepiece ($8,700) in stainless steel. The traditional timepiece comes with a Velvety Clous de Paris guilloché on the dial and also has a second time zone and 24-hour display, so Spike can keep track of his skyrocketing schedule.

Nicholas Hoult in a Jaeger-LeCoultre Reverso

Like Spike Lee, Nicholas Hoult ditched the idea of a traditional tuxedo. In Hoult’s case, he wore a Dior black tuxedo that had a sash that wrapped from one lapel around his back and waist to hang at one side down his pant leg. It was a surprisingly interesting new take on a tuxedo, but despite his unconventional choice, like Lee, Hoult went for a Jaeger-LeCoultre Reverso. Hoult’s came in pink gold ($20,100)—an elevated material to match his elevated look.

Barry Jenkins, director of If Beale Street Could Talk, kept his whole look classic from head to toe to wrist. He paired his traditional but modern-cut navy tuxedo with a time-only pink gold Jaeger-LeCoultre Master Ultra Thin Small Seconds timepiece ($14,300) with elegant and retro-looking Dauphine hands. If Jenkins has permanently pocketed this piece, its one that should last him through many award seasons to come.

It’s baaaack. Seacrest stole the show at The Golden Globes with his ultra-covetable yellow gold vintage Rolex Daytona Ref. 6263. He took it out for another stroll at the Oscars, and who can blame him? This timepiece is a highly personal choice and is a collector’s favorite. For the man who work’s the hardest to keep all of these celebrity’s names in the spotlight, he certainly deserves a crown jewel. His Rolex Ref. 6263, similar to the one from a Phillips auction pictured above that sold for $225,000, is particularly rare in that only 100 were made per year in yellow gold during its production. This time around he broke out an aubergine floral print tux instead of velvet to accent his rare Rollie. Just another award season to prove that Ryan Seacrest still rules the red carpet.

It was huge night for Mahershala Ali, who won Best Supporting Actor for Green Book. His win marked the first time that a black actor has won two Oscars in that category—and he’s only the fifth black actor to ever win that honor in the Academy Awards’ 91-year history. To mark the big occasion, Ali chose a standout timepiece—Cartier’s striking Santos de Cartier Skeleton ($26,800). The original Santos Cartier watch was made for another pioneer—Brazilian aviator Alberto Santos Dumont in 1904. That’s 25 years before the Oscars came into existence, and a 115 years before Ali would take home his second Oscar for Best Supporting Actor.