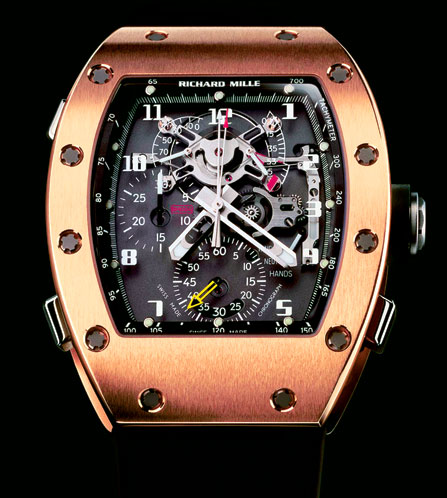 While many watch companies cloak themselves with images of automobile racing or aviation, Richard Mille injects this performance ethos into his watches. Indeed, it is acutely applied in his interpretation of the acme of watchmaking tradition: the tourbillon. Mille’s flagship model, the RM003 tourbillon with GMT indicator ($179,000 in white gold), exudes a sense of performance in its functions and in the construction of its massive, tonneau-shaped case. Surfaces have support ribbing for increased rigidity, and the  tourbillon bridge design takes its cue from an automotive suspension triangle for shock absorption. A torque indicator allows the owner to keep the mainspring wound at the optimal level of tension, and a function selector for the crown minimizes the chance of water seepage.

Astute watch aficionados will notice similarities between these features and those of Audemars Piguet’s Royal Oak Concept. This is not a coincidence. Mille enjoys a technical collaboration with Renaud & Papi, the specialty house that manufactures many of the high-end complicated pieces—including the Concept—for its majority shareholder, Audemars Piguet.

While Mille is not a watchmaker, this former managing director for Mauboussin had a vision for forward-thinking watchmaking that Renaud & Papi and Audemars Piguet embraced. “Everyone working on complicated movements today is using computers for design and production,” explains Mille, “but they’re using them to create 19th-century movements. For my part, I want to use modern tools to create a modern watch. It’s a little like car engines. The principles are the same as they were a century ago, but the techniques and performance are miles ahead today.”

Despite his progressive approach, Mille maintains some watchmaking traditions, such as hand finishing and assembly, which are tricky given the characteristically blackened surfaces of his watches. Consequently, production is limited: Only about 60 of the RM003 and the earlier RM002 tourbillons will be released this year, along with another 60 of his new chronograph, the RM004. Mille’s interpretation of the column wheel movement contains a number of modifications that reduce friction and inertia for improved accuracy. With 450 parts and a price tag of $95,000 (in rose gold), the RM004 is perhaps the most complex and expensive chronograph ever built. Another upcoming automatic model will feature a variable inertia rotor that can be tuned to your lifestyle—if you spend all day at a desk, the watch can be adjusted to require less wrist movement for winding.

Allusions to race cars and fighter planes may seem incongruous to those whose idea of g force is a quick lunge across the table for the salt. But then again, many people happily drive their Ferraris to the supermarket on a daily basis. What everyone can appreciate, though, is that Mille offers a new take on mechanical watchmaking that looks forward instead of only back.