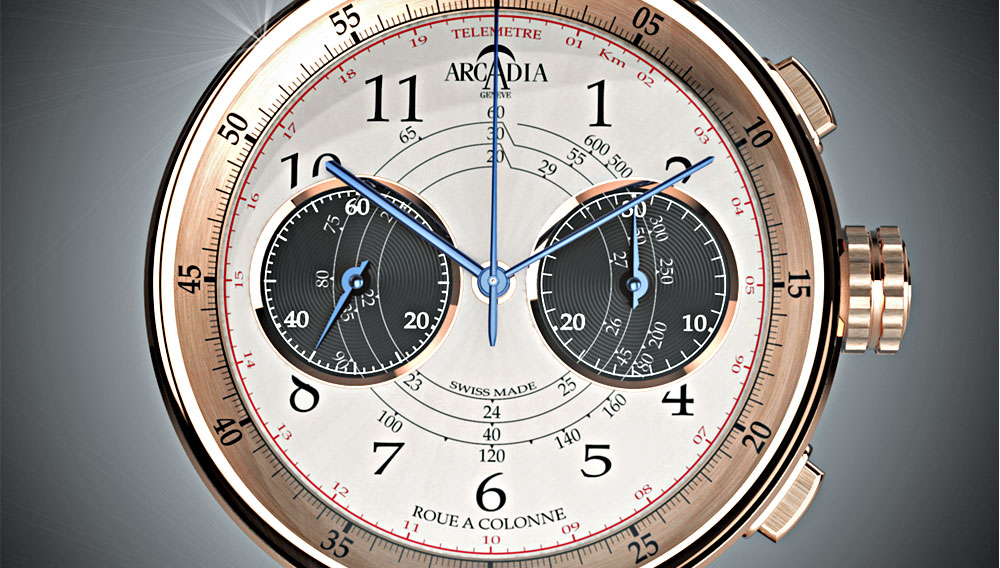 The sudden discovery of an extensive cache of decades-old watch movements reminded horologist Claude Sanz of the painful divide that exists in the minds of watchmakers between the glory days before the advent of quartz movements and the tense decades that followed. “The watchmakers who worked before the quartz crisis in the 1970s really don’t like to talk about it,” he says. “It’s like they lost a war.”

As owner of Bunter SA, one of the world’s most prominent jewelry-watch specialty houses, Sanz has personally played a leading role in preserving and building upon the long-standing traditions of haute horlogerie. But his unusual find enabled him to take his dedication to timekeeping’s past a significant step further by using these vintage mechanisms to revive a historically significant but obscure brand name.

Shortly after Sanz revived the defunct Arcadia brand, established in 1858, and its corporate parent, the Fleurier Watch Company, he identified one of the firm’s classic chronograph designs from the 1930s as the model for his first vintage-movement watch, which he hopes will showcase the intricate watchmaking techniques artisans employed long before the era of mass production. “The watchmakers from the Val-de-Travers [where Fleurier is located] really created a large part of the watch industry, and nobody knows it,” he says. “I want to pay tribute to these people with products.”

Soon to be released, Arca­dia’s first column-wheel chronograph ($30,000) contains a Valjoux 22 movement that was widely used from 1950 through 1964. Both the vintage movement and the case design, however, have been completely updated to suit contemporary tastes. The expanded 43 mm case is fitted with a traditional dial that, on sportier versions, may incorporate such nontraditional elements as carbon fiber. Through the crystal on the reverse side, one can admire the high-level finishing that craftsmen applied to the lateral-clutch chronograph movement—a modern detail rarely seen on vintage watches, which typically had solid cases.

The brand’s vintage-oriented timepieces are limited in quantity by the number of movements Sanz can source and assemble; in fact, the firm’s production is unlikely to exceed 300 examples this year. Yet these watches’ scarcity will likely increase their appeal among aficionados, who have long appreciated and sought handcrafted and, in some instances, hand-wound chronograph movements like the ones Sanz has selected for his line. “Back [when these movements were made], it was difficult to interchange parts without a great deal of hand adjustment,” he notes. “But these watches were built to last hundreds of years.”