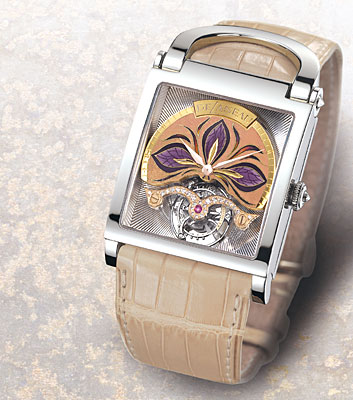 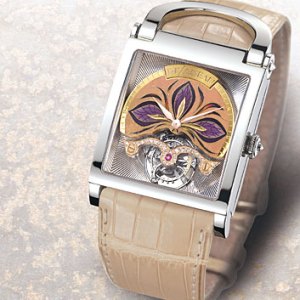 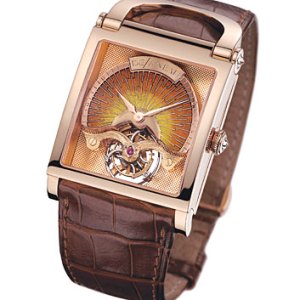 Cristina Thévenaz knows what she wants and how to get it. The stylish, blond, 39-year-old mother of four is an outspoken force in the male-dominated bastion that is the Swiss watch industry. Since Thévenaz’s husband, Philippe, acquired the jewelry watch brand Delaneau in 1997 and appointed Cristina, a former graphic designer, the creative director, she has been developing watches that are as distinctive as she is. “You have to be careful when you are an indepen­dent company,” she explains. “You have to do things that are not easy to do. We cannot survive without being completely different from everyone else. We have to do very, very special things.”

Thévenaz initially mined Delaneau’s archives for artistic direction, which resulted in the vintage-looking Marlène and Joséphine jewelry watch collections. Then last spring, she made a dramatic leap into more complicated pieces with a collection of 12 one-of-a-kind women’s tourbillon watches that managed to combine one of watchmaking’s most challenging complications with the time-honored decorative crafts of miniature enamel painting and engraving. “For Delaneau, a brand known for more eccentric things, I could not make a tourbillon with a plain dial,” she explains. “My duty is to add something, so I added value with engraving and miniature enamel painting–crafts that represent the history and legacy of Geneva.”

Thévenaz says she selected the tourbillon complication for what she perceives as its femininity, noting that it does not provide any real function beyond telling the hours and minutes, but is a piece of art. She recognized that its aesthetic nature would appeal both to women who understand complicated mechanical watchmaking and to those who simply appreciate beauty. The specialist she selected to create her tourbillon was Christophe Claret in Le Locle, who is renowned for combining aesthetics with high-quality mechanics.

As a woman, and one who is not a watchmaker–or, as she jokes, not even the daughter of a watchmaker–Thévenaz encountered resistance when she declined Claret’s first design because she felt it did not reflect her original concept. Claret bristled, but Thévenaz refused to relinquish her vision of a feminine tourbillon that called for a specially designed dial, bridge, and cage to evoke a sense of lightness and airiness. Under her direction, Claret built the watch with a cutaway dial to expose the mechanism, and he configured the bridge in the shape of a wing to “liberate” the movement, as she says, and create the impression of a flying tourbillon. Also, Claret condensed the movement as Thévenaz requested, and adapted the base plate of the caliber to fit Delaneau’s square case.

“She has many ideas, and she is very specific,” says Claret, who liked the concept of creating a tourbillon for women but was frustrated by the many changes required for pairing established mechanics with Thévenaz’s artistic vision. “As a woman, she has a different sensibility. In the end, you must arrive at a design that allows the aesthetic and mechanical aspects to work together.” While the marriage between the creative director’s vision and the watchmaker’s execution was occasionally contentious, the offspring produced by the union certainly were beautiful. After a year of development, Thévenaz had her feminine tourbillon movement, and then it was time to dress it up.

Enamored with the vibrant antique timepieces she had seen in horological museums, Thévenaz sought out the few remaining craftspeople in Geneva who practice engraving and miniature enamel painting. “We’ve created a pool of artisans here,” she says, noting her partnerships with Anita Porchet, who specializes in the pailloné enamel technique and restores museum pieces, and enamel painter Dominique Baron, who works on staff. “These are people who are in love with the work and spend hours and hours to achieve perfection–whether in miniature engraving, micro-setting of gems, or, of course, miniature enamel painting.”

For the engraving of the 18-karat gold dials, she turned to Kees Engelbarts, a young artist who works in a small, cluttered room across the hall from his modest Geneva apartment. The pair worked closely to create the Art Nouveau—inspired designs. The 12 tourbillons quickly sold, and Delaneau has since produced several custom commissions of more elaborate jeweled and enameled pieces that further challenged Claret and his team of young watchmakers.