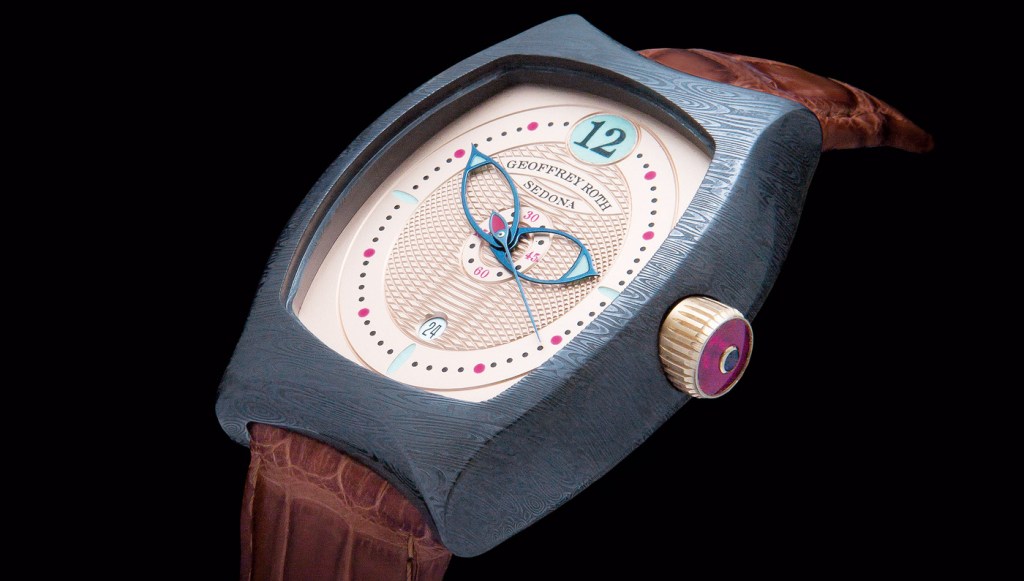 Geoffrey Roth establishes an outpost of independent horology in the American Southwest.

After spending nearly 2.5 years sourcing parts in Switzerland to build his first watch, Geoffrey Roth—owner of his namesake watchmaking company based in Scottsdale, Ariz.—had reached his limit. “When I called the casemaker 7 months after placing my second order,” Roth recalls, “I learned they hadn’t done anything.” The would-be watchmaker—whose love for timepieces flourished during his many years as a jewelry buyer at the annual Baselworld fair—was learning the bitter realities that con-front outsiders dealing with that insular community. But unlike many other aspirants, Roth did not let Swiss indifference end his dream. Instead, he bought a computerized machining device and began making whatever parts he could himself.

Today, Roth is a part of the small but resurgent U.S. watch-manufacturing industry, which all but died after World War II. Roth does not yet make his own movements—he is still working from his original purchase of 500 ETA 2892 automatics—but he has added his own touch to virtually everything else in his four current models, which will eventually be joined by a fifth: a diving watch. These pieces express Roth’s own aesthetic sense and are informed by his partiality to sculpture, engineering, and flowing shapes and vivid colors. “My philosophy became not only to make everything we possibly can in my studio,” he explains, “but to source the material as well.”

His distance from the world’s major watch-component suppliers has forced Roth to be resourceful. After much searching, he found a company in Utah that built a device to put mounting feet on his dials, a crucial step to calibrate his decoration machines. When suitable tools were unavailable, he had to create his own polishing laps to finish the concave surface of his casebacks. His soon-to-be-released diving watch was pressure tested in a chamber he constructed himself. Thanks to his meticulous construction, the watch, he claims, has survived pressures equal to a depth of over 8,200 feet.

While being located outside of Switzerland imposes substantial technical challenges, this circumstance also lends an independent spirit to Roth’s designs. “This isn’t conventional Swiss watchmaking,” he says, “because what I do comes naturally. I just woke up one day, decided to design my own watch, and picked up a draftsman’s pen.”