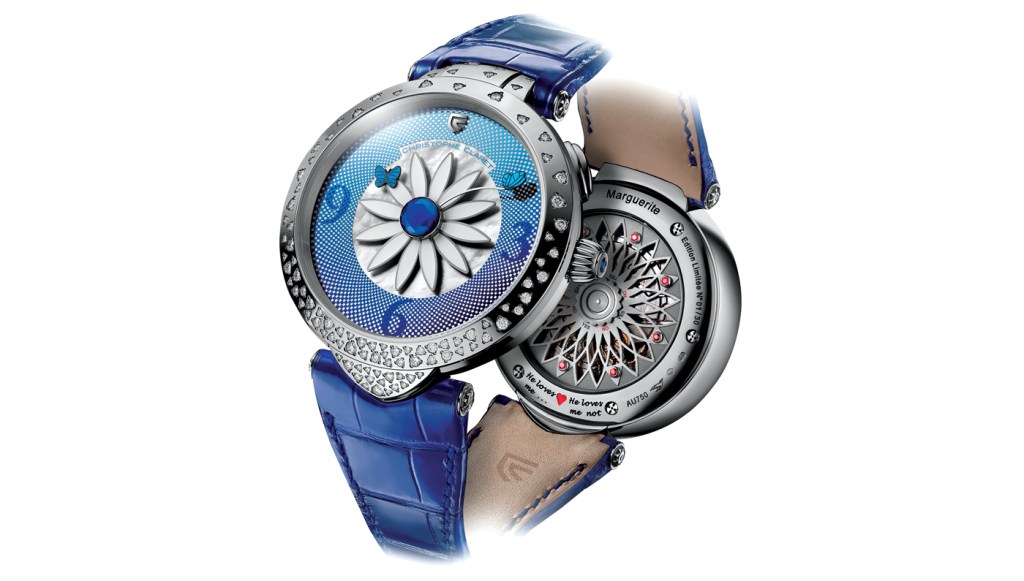 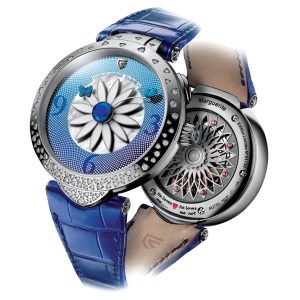 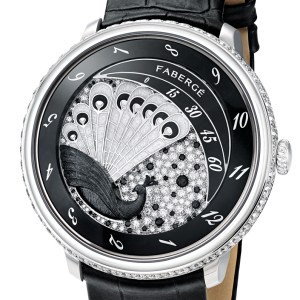 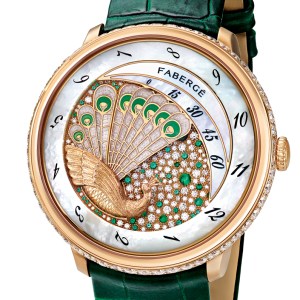 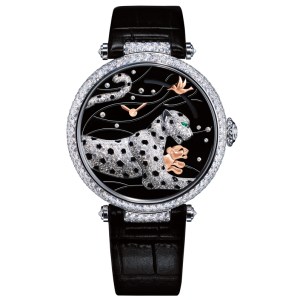 The Swiss agree on only one thing about women’s watches: Beauty is nonnegotiable.

At the end of 2015, Fabergé’s Lady Compliquée, a timepiece built with equal parts artistic whimsy and horological sophistication, took the prize in the ladies high-mechanical category at the prestigious Grand Prix d’Horlogerie de Genève. Not only did the award vault Fabergé into the rarefied realm of haute horlogerie, but it also helped substantiate a theory held by Jean-Marc Wiederrecht, the complication specialist who built the watch’s mechanically unfurling peacock tail, about women and fine timepieces.

“I had always been told that ladies need precious things with gold, diamonds, stones, and they are not interested in the mechanical part of the movement—and I was sure that was wrong,” he says.

“Because when I showed a nice movement to women, starting with my wife, I could see they were interested.”

Wiederrecht adds: “Maybe they weren’t interested in the performance, the technical aspects, but they responded to the beauty of the technical. To provide something interesting for women—that was an opportunity.”

Wiederrecht is far from being the only Swiss watchmaker excited by the prospect of making—and selling—more high-end watches for women. Yet opinions in Switzerland diverge sharply about the shapes those watches should take. Some, like Wiederrecht, apply their considerable technical creativity toward themes they imagine will resonate with women. Others take a much more conservative line, maintaining that it will be the women who will come around to appreciating the values and designs Swiss watchmakers have proffered all along.

Christophe Claret, a longtime respected behind-the-scenes technical master, who has relatively recently sold watches under his own name, belongs firmly in the first camp. Inspired to make his first “feminine watch” in 2014, he created Margot, a 731-part, daisy-themed mechanical ode to the classic oracle game “He loves me, he loves me not.” (Later that year, it, too, won the GPHG award in the ladies’ high-mech category.)

“What motivates me the most is to create a watch with innovations that do not exist on the market,” Claret says. “And if the watch matches women’s needs, I am more than satisfied.”

Which begs the question: What are those needs? And the inevitable follow-up: Are the Swiss prepared to overcome years of male-dominated leadership to give women what they want in a timepiece?

Van Cleef & Arpels was one of the first brands to espouse a different school of thought in answer to such questions. Its concept of “poetic complications” subjugated the technical side of watchmaking to the storytelling capacity made possible by the mechanisms—the prevailing wisdom is that mechanics are important to women only insofar as they service the story.

The Cartier Panthères et Colibri, unveiled in January at Geneva’s Salon International de la Haute Horlogerie, is a prime example of such horological narrative: A diamond-set panther with spots of black lacquer lounges on the black diamond-studded dial. At the press of the winding crown, a baby panther lunges from behind its mother’s paws to chase after a golden-winged hummingbird.

“If you do it in a beautiful way, even if women are not sensitive to mechanics, they will be sensitive to refinement, beauty, and something reflecting their own personality,” says Aurelie Picaud, the new timepiece director at Fabergé.

Standing By the Classics

Over the past five years, a slew of Swiss firms typically associated with men’s pieces, from Audemars Piguet to Zenith, have turned out a flurry of feminized wristwatches featuring time-honored complications such as the tourbillon and perpetual calendar. It might be tempting to attribute such conservatism to current economic uncertainty, but many brand executives insist they are simply meeting demand from women seeking traditional horology.

“When it came time for us to imagine our choice of inspiration for a ladies’ line,” says Jérôme Lambert, CEO of Montblanc, “we decided to have a classic watch because women are more and more in a business environment where they are dressed in an elegant and classical way.”

As of this fall, the maker of pens and watches has expanded its 2-year-old Bohème collection of women’s timepieces to include not only models featuring an automatic date, a perpetual calendar, and a day and night display, but also several versions of its patented, in-house Bohème ExoTourbillon, including a 110th-anniversary edition encased in 18-karat red gold and bearing a blue lacquered serpent coiled around the dial.

“I know with my experience in fine watchmaking that a ladies’ watch always has to be more graphically sophisticated than a men’s watch,” Lambert explains.

on what make a successful women’s watch are sure to be sharpened by they current market, in which Swiss watch exports for the first six months of 2016 are down 10 percent worldwide, and high-end complications for women appear to be suffering even greater declines.

Fred Levin, president of NPD Luxury Practice, which tracks retail sales of fine watches in the United States, says that sales of women’s timepieces retailing for more than $25,000 were down 22 percent from January to May of 2016, compared to the same period in 2015. “They’re getting destroyed,” he says.

Even the venerable Patek Philippe may not be immune to the downturn. In 2009, the Geneva-based watchmaker embarked on a much-publicized campaign to promote a range of “Ladies First” complications that grew to include an ultrathin split-seconds chronograph, a minute repeater, and a perpetual calendar—some bedecked with diamonds. But according to industry watchers, the brand’s entry-level, mostly quartz-powered Twenty-4 model is what is currently moving the needle among women at retail.

Czapek & Cie., a 2-year-old company founded on the legacy of the 19th-century watchmaker François Czapek, tackled the question of what women want holistically: The brand held a dinner for nearly 70 shareholders, a third of whom were women, at its Geneva offices in May and asked them to review about 20 designs for its first ladies’ model, the Quai des Bergues Lady, due out by the end of 2016.

Xavier de Roquemaurel, the CEO, says he was surprised to discover that women were drawn to an understated style, “not necessarily that feminine.”

“They like to have a serious watch and serious doesn’t necessarily need diamonds,” he says. “We are creating a design that we know some men will buy too.”

His point about unisex appeal underscores an evolving trend, says Leon Adams, owner of Cellini Jewelers, the well-known high-end watch and jewelry boutique in New York’s Waldorf Astoria. “Women were wearing tiny watches you’d probably need a magnifying glass to see. Now, they gravitate more toward bracelet styles, and watches that they can leave on for day and evening, sport and dress.”

He cites Rolex as the prime beneficiary of this movement because of its practical, all-in-one allure—adding that a growing trend of casualization combined with “ludicrous prices” have conspired to make it difficult for women to justify owning multiple timepieces.

Audemars Piguet, Adams adds, reacted smartly, by redesigning its flagship Royal Oak model in 2012 with new sizes geared to smaller wrists. “They’re really trying to capture the woman who wants that utilitarian watch but wants to stand out from the Rolex crowd,” he says.

The Royal Oak may indeed be Audemars Piguet’s indisputable bread-and-butter product, but that has not stopped the watchmaker from doing its best to cultivate the next generation of female buyers. In 2015, the brand redesigned its decades-old Millenary collection (it now features an openwork dial) and began promoting it to women.

Of course, watchmakers have been obsessed with beauty for centuries. Michael Friedman, a watchmaking historian at Audemars Piguet, notes that the earliest watches, for both men and women, were mechanical novelties with elaborate decorations and intriguing complications including moon phases and alarm mechanisms. They were also terrible at keeping time.

As horology improved in the 18th and 19th centuries, so, too, did the industry’s attempt at marrying precision and beauty. The results, marketed to women of means, were as varied as they were whimsical, including fashionable chatelaine watches, unusual form watches—shaped like mandolins, baskets, strawberries, you name it—and extravagant singing bird boxes that did double duty as timepieces.

Clearly, women have always appreciated an incredible breadth of timekeepers, and that appreciation continues to this day. For modern-day affirmation, simply look to the auction houses.

“Women are buying online,” says John Reardon, Christie’s international head of watches. “And it’s not modern ladies’ pieces or quartz pieces—we’re talking about vintage men’s watches that are perfectly sized to women. Women are buying them not only for an investment statement but also because they love them.”

If there’s anything to be gleaned from this mishmash of contemporary preferences, perhaps it’s that the watch business has officially entered the post-gender age. “I don’t think there’s such a thing as a man’s watch or a woman’s watch anymore,” Friedman concludes. “A woman can wear anything today.”