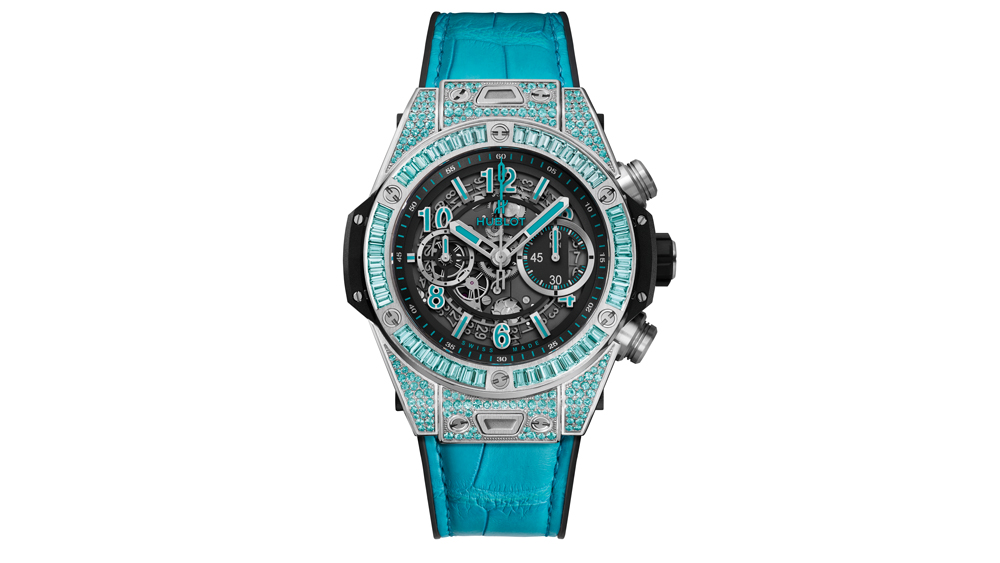 Paraiba tourmaline, the neon, lagoon-colored stone discovered in the Paraíba region of Brazil in the 1980s, immediately shot to gemstone stardom because of its electric blue-green glow. It is rarer, and sometimes more expensive, than diamond. Only one paraiba is mined for every 10,000 diamonds, and top quality large stones can cost up to $60,000 per carat.

Paraiba is perfect for watches because it retains some of its sizzle even when set flush with the metal—the conventional way to set into watches. Compared to the prong setting of a ring, setting a gem into metal blocks light from entering the pavilion and out through the top, which can make even diamonds look dull. Paraiba is something of an exception to this drawback. Watches set with the gem have a special glow.

Roger Dubuis, Graff, Chopard and Fabergé have all used the gem in watches, but pieces are limited and sell out quickly. Hublot and Harry Winston recently introduced pieces in their current collections. Hublot’s Big Bang Paraiba is set with up to 224 paraiba in a collection that includes four references in two sizes. Hublot says the gems were ethically mined in Brazil under environmentally sustainable conditions, and guarantees their origin. The cases are 45 mm or 39 mm in either white or King gold (a Hublot alloy of gold, platinum and copper). They contain either the automatic HUB1242 or HUB1710 calibers, and are priced between $232,000 and $274,000.

The Harry Winston Ocean 20th Anniversary Biretrograde Automatic is set with 120 paraibas, including 97 on the dial and another 23 on the rotor. The movement, automatic caliber HW3302, drives a bi-retrograde display of minutes on the lower left and days of the week at the lower right. It is a limited edition of 20 pieces celebrating the 20th anniversary of the collection and they’re keeping the price under wraps until, of course, you request it.

A controversy over paraiba gemstones ensued in 2003 when new deposits were found in Mozambique and Nigeria and then named after the Brazilian state. The Brazilian government lobbied to protect the name, arguing that only gems mined in Paraíba could be referred to as paraibas (the gemstone does not use the accent to delineate between the region and the natural material); otherwise, it should be referred to as “paraiba-like.” However, the Brazilian and African gems look exactly the same. Both have traces of copper and manganese, which create the gem’s exotic color. Otherwise, there are only slight differences in the chemical makeup, which don’t affect the color and which a standard gem lab can’t detect. So in 2007, CIBJO (the world jewelry confederation) ruled that the name paraiba could stand for any green-to-blue tourmaline colored by copper, regardless of country of origin.

Regardless, the new finds had little effect on price or rarity since Brazilian supplies are dwindling, and gem lovers are grateful for the African deposits.