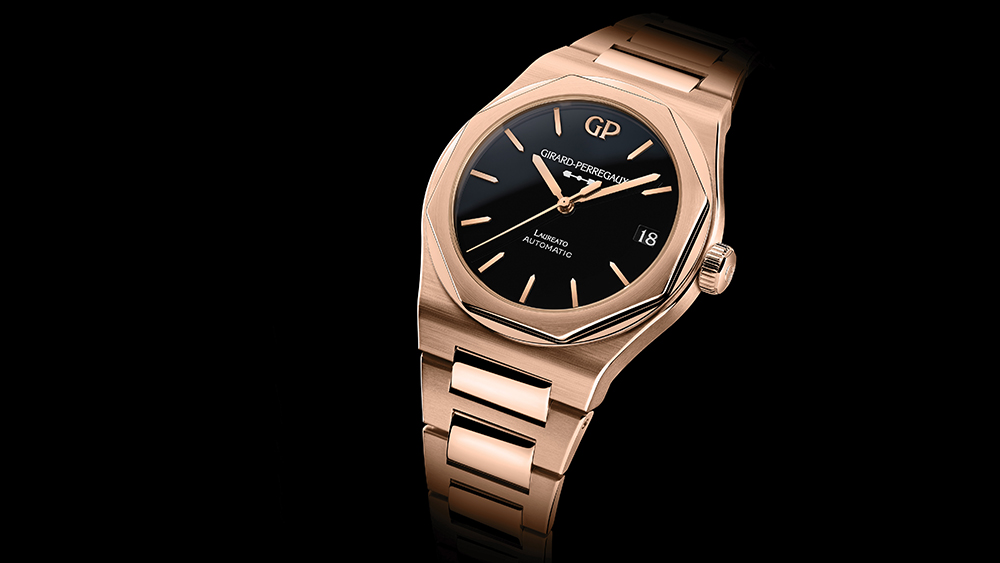 Of the design trends that have shaped the luxury watch industry in recent years, none has rivaled, or even challenged, the vogue for steel sports watches—especially those with a heritage from the 1960s and ’70s.

That subgenre is typically marked by integrated bracelets, distinctive silhouettes and a pared-down elegance associated with Gérald Genta, the Swiss watch designer who penned the era’s most iconic models, including the Audemars Piguet Royal Oak and Patek Philippe Nautilus, a pair now even more scarce than they are sought-after, with numerous references still commanding two or even three times retail value on secondary channels.

That supply-demand imbalance has created a trickle-down phenomenon in which watches with a similar look and heritage are now seeing a surge in interest. Chief among them: Girard-Perregaux’s Laureato.

The original, created almost 50 years ago, was imagined by GP’s in-house designer, Adolfo Natalini, in the angular style that is a defining feature of the category. (The screw-studded octagonal bezel of AP’s Royal Oak, which debuted in 1972, was inspired by a vintage deep-sea diving helmet.)

The Laureato also features an octagonal bezel, but one that sits atop a circular pedestal positioned above a tonneau-shaped case, creating a geometric stack that lends the model an unmistakable touch of modernity. Initially dubbed the Quartz Chronometer, the watch soon became known by its alluring nickname: Laureato (“the Graduate” in Italian).

But not since its redesign in 2017 has the model been the focus of so much attention. The secret to its popularity, retailers say, is its wearability. “It looks good with everything from jeans to a suit, and there are a bunch of different options whether you want a rubber strap or a rose-gold bracelet, steel or ceramic,” says Nick Boulle, president of de Boulle in Dallas and Houston.

As of this fall, those options include the Laureato Green, a 42 mm steel model with a fetching racing-green dial; the 38 mm Laureato Copper, a downsized version bearing a burnished, metallic-looking dial; and a 42 mm model in pink gold with a black-onyx dial that debuted at the start of the summer.

Although Reilly admits he only considered the model because his first choice, a Royal Oak, was unavailable, he ended up with a watch that’s in fact better suited to his tastes—and following a purchase experience he described as “refreshing.”

“I called a local authorized dealer and had the watch the next day,” he says. “There was no calling around, no waitlist, no ‘building a relationship’ or purchase history required.

“While the scarcity of ‘hype’ watches from brands like Rolex, Audemars Piguet and Patek Philippe has frustrated many watch enthusiasts, it’s had a silver lining,” he concludes. “It’s forced many collectors to broaden their horizons.”

Three Other Watches Having A Moment in the Spotlight:

Girard-Perregaux’s Laureato isn’t the only model seeing a surge in popularity. Retailers have also pointed to the below timepieces as moving up on the “must-have list” for collectors.

With roots that go back to 1977 and the introduction of the famed “222,” the best-selling Overseas collection, revamped in 2016, boasts countless coveted iterations, such as this tourbillon skeleton.

Inspired by the steel St. Moritz model introduced by the brand in 1980, the watch’s rugged design pays homage to Switzerland’s Alpine biotope and the majestic eagles that soar above it.