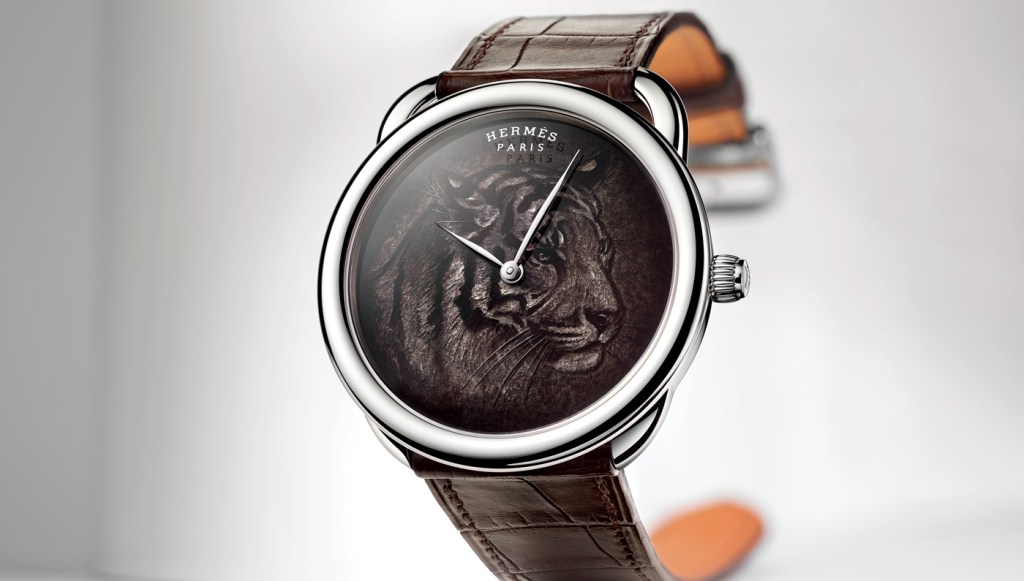 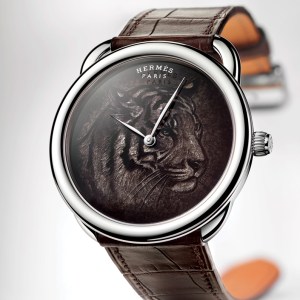 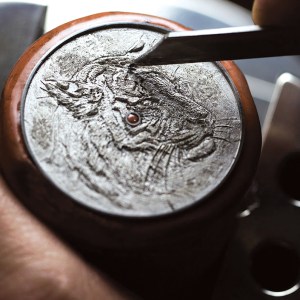 Hermès’s Philippe Delhotal works with a massive array of artisans at his fingertips.

In mid-19th century France, people were fanatical about paperweights. Some of the most luxurious were crafted by Les Cristalleries royales de Saint-Louis, using the ancient millefiori technique. Though the fad dwindled by 1860, Saint-Louis never stopped producing millefiori orbs, as Philippe Delhotal discovered on a visit to the maison in 2012. “They had four artisans still making the paperweights,” he recalls. “It was not a way to earn money, but just to save the craft.” Delhotal inquired whether the hefty glass bulbs might be scaled down to make watch dials. One of the artisans, a man named Xavier, looked at him and said, “Are you crazy?”

As creative director at La Montre Hermès, Delhotal is accustomed to that response—a reaction he often provokes by suggesting the impossible to artisans at maisons like Saint-Louis, which Hermès acquired in 1989. Delhotal is also accustomed to hearing what Xavier said next. “He told me, ‘This is a challenge, and I like challenges. Let me try.’ After two years and a lot of broken crystal, he succeeded.”

Featuring dials decorated with dozens of colorful handworked glass flowers, the timepieces in the Arceau Millefiori collection are characteristic of the watches Delhotal has designed in his seven years at Hermès. They also exemplify what makes La Montre Hermès unique with respect to the métiers d’art.

Hermès has sold watches since the 1920s. Initially the company collaborated with manufactures such as Jaeger-LeCoultre, enhancing high-end timepieces with fine leather straps. The Hermès name began to appear on movements in 1978, after the company opened production facilities in Switzerland, adding horology to the range of Hermès métiers. Recent additions to Hermès holdings—including a 25 percent stake in Vaucher Manufacture Fleurier—have augmented access to expertise and quality control. “We are known for craftsmanship and creativity,” says Delhotal. “Vaucher increases our credibility.”

Hiring Delhotal also boosted the credibility of La Montre Hermès. He previously worked for Jaeger-LeCoultre and Patek Philippe as creative director. Yet there was another dimension to his background that made Hermès a natural fit. In the late 1980s, Delhotal studied fashion at the Paris American Academy in France. “I learned a lot about design and color,” he says, “and that really helps when you’re applying a motif from a 90 square centimeter carré [scarf] to a small watch dial.”

Delhotal often begins new projects by browsing vintage and contemporary Hermès designs. Two separate archives inform his search. The first is a warehouse containing one example of every piece Hermès has ever made. The second is a private museum established by Émile-Maurice Hermès containing objects—from stirrups to picnic sets—that have inspired Hermès collections over the years.

And then there are Delhotal’s conversations with Pierre-Alexis Dumas, a direct descendant of the company founder Thierry Hermès whose knowledge of the maison is so deep that he constitutes a sort of living archive. “He gives me tips and challenges me,” says Delhotal, emphasizing the creative value of these spontaneous interactions. The same goes for interactions with Hermès artisans like Xavier. Delhotal discovers traditional crafts—and explores new applications—by engaging with craftsmen inside their ateliers.

This year Delhotal had the opportunity to give life to Dumas’s Nature at Full Gallop theme that is being realized in a wide variety of crafts at Hermès. Picking a drawing of a tiger by the renown animalist illustrator Robert Dallet, who has collaborated with Hermès many times in the past, Delhotal approached Olivier Vaucher, the Geneva-based métiers d’art specialist. Vaucher suggested an antique émail ombrant (shaded enamel) technique, which was originally practiced in Limoges, the ancient center of enamel work in France. The technique combines negative engraving with a covering of tinted translucent enamel. Only after the firing process can the artisans assess the effect of the enamel. Vaucher produced 12 Arceau Tigre watches with the enamel deftly rendering the contrast in Dallet’s work.

Just as he doesn’t feel constrained by artisanal traditions, Delhotal doesn’t feel limited by the brand’s in-house métiers. For instance, while traveling through Japan several years ago, he met a master of aka-e porcelain painting named Buzan Fukushima. The artisan was accustomed to working on large objects such as vases and dishes, but Delhotal fell in love with his aesthetic. “As often happens, it was a matter of luck, meeting the right person at the right moment,” he recalls. Buzan translated an image from a Hermès silk scarf into miniature painting-on-porcelain dials made by the Manufacture Nationale de Sèvres.

Buzan was so exhilarated by the experience that he created a second dial with his own original design as an offering in the new Slim d’Hermès line. For Delhotal that was perhaps the ultimate accolade, the beginning of a living relationship between watchmaking and aka-e. And for Delhotal’s successors at Hermès? Buzan’s motif might provide visual inspiration for a novel carré or a new Saint-Louis paperweight. Hermès, 800.441.4488, (hermes.com)