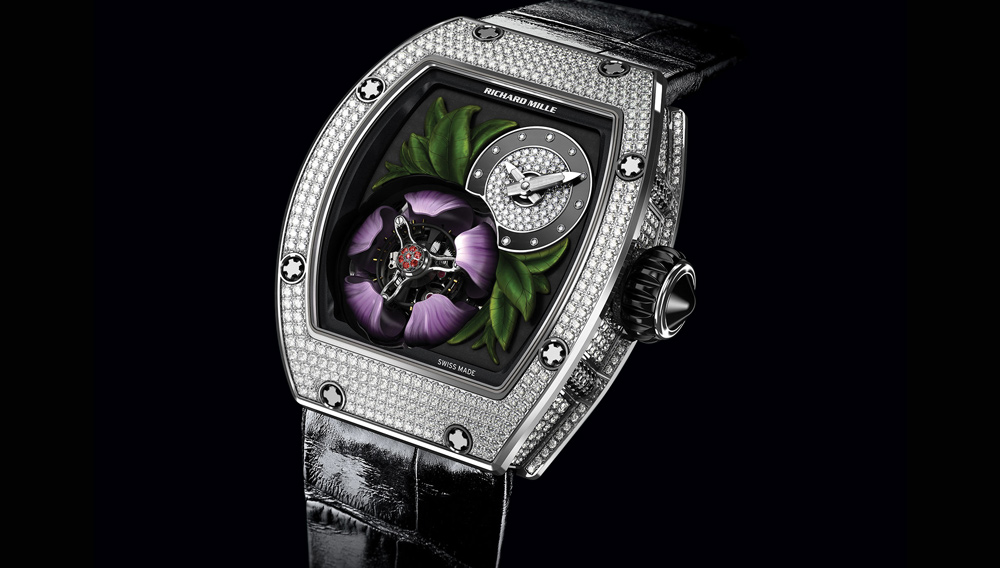 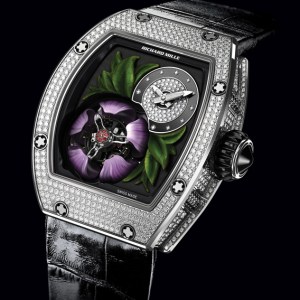 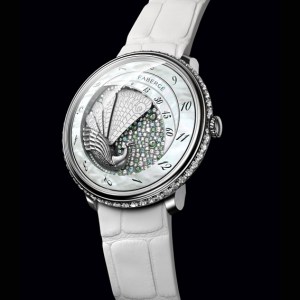 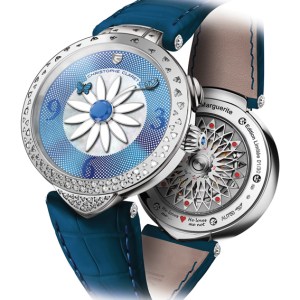 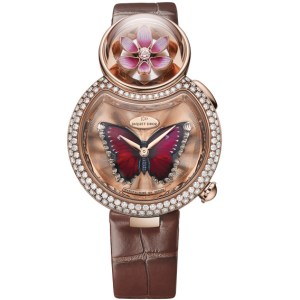 Why women’s mechanical timepieces are becoming more intriguing than men’s.

One advantage that women’s watches enjoy over men’s offerings is an element of abandon: the same freedom of design that will put a couture dress in the spotlight while a tuxedo is lost in the background. Despite their love of elaborate technical detail, many men shy from frippery. Ladies’ timepieces, on the other hand, can never be overdecorated or too whimsical, it seems. And if one considers some of the latest creations in the category, it does appear to be the area where designers are having all the fun. One of their latest fancies is imparting mechanical motion to a range of pieces that vibrate, rotate, orbit, fly, and bloom.

Watch designers have long applied familiar feminine motifs of flowers, butterflies, peacocks, and panthers to the dial, and in recent years to the moving winding rotor. Such compositions are now being further animated by linking them to specially designed mechanical complications and decorating them with enameling, gem-setting, and other métiers. The result is a spectacularly theatrical presentation of time unfolding against ornate backdrops. Mechanics, in fact, give these pieces so much personality that a tourbillon seems rather staid by comparison.

Last year’s Margot, by minute repeater specialist Christophe Claret, is a seminal example of the new genre. It links a repeater chime to a mechanical game of “He loves me, he loves me not” in which petals are randomly plucked off a daisy in the center of the dial. This year Claret followed up with the Marguerite, which has a daisy-shaped inner dial that rotates to tell time using butterfly-themed hands.

An even more exotic flower opens over the tourbillon cage of Richard Mille’s RM 19-02 Tourbillon Fleur, unveiled at the Salon International de la Haute Horlogerie in Geneva earlier this year. Designed to resemble a magnolia, the five petals open or close automatically every five minutes or on demand. The act of blooming consumes enough mechanical power that Mille devoted one of two winding barrels exclusively for the function. The petals, hand-painted over white gold, were made by the Geneva métiers atelier Olivier Vaucher.

Jaquet Droz, the master of automatons, also created an animated bloom this year under a domed sapphire crystal on the Lady 8 Flower. On command, a lotus flower opens to reveal a briolette diamond. The lower dial is gem-set in a butterfly motif.

One of the most exquisitely executed is part of a new watchmaking effort from Fabergé; its Lady Compliquée harnesses the tail feathers of a peacock to animate a retrograde minutes display. The hand-wound Caliber 6901 was created by Jean-Marc Wiederrecht, whose company Agenhor specializes in the retrograde complication. The platinum case boasts 54 diamonds and the dial is set with diamonds, Paraiba tourmalines, and tsavorite garnets that echo the undertones in mother-of-pearl. The composition is a homage to

the colors and adornment of a Fabergé “Peacock” egg made in 1908.

Graff’s Disco Butterfly depicts several butterflies using marquise and pear-shaped sapphires, rubies, emeralds, or diamonds. A main rotor activates individual gears that set each butterfly into rotation on its own axis and also in unison around the dial, all powered by the movement of the wearer.

The inverted movement has been used to dramatic effect by several brands, but most frequently by Dior. The rotors of its proprietary Inversé caliber appear on the dial side and have been set with diamonds, pearls, and even feathers, usually to represent the swirling skirts of the couture gowns for which the fashion house is famous. The “skirt” sways with the wearer’s movement and at the same time winds the watch. Similarly, the new Dior VIII Grand Bal Pièce Unique Envol is decorated to recall “the spare, modernist allure” of the haute couture collections designed by Dior creative director Raf Simons. Its rotor is set with mother-of-pearl, gold, lacquer, and baguette-cut diamonds or gemstones designed in a spiral while the background dial is made of scarab beetle marquetry, surely a first in watchmaking.

Ever since it appeared in Van Cleef & Arpels’s collection a few years ago, the rotating 24-hour disk has become a popular means to provide a dynamic display, especially by illustrating the transition from day into night. Blancpain’s Day Night, one of the newest entries, is decorated with gradations in the color blue deposited on

mother-of-pearl to mark the change. The moon is composed of 50 diamonds and the sun of 50 yellow sapphires. The watch contains the automatic retrograde Caliber 1163JN, a flyback chronograph modified for this collection. Likewise, the Cartier Rêves de Panthères (dreams of the panthers) depicts three of the large cats in repose, sculpted out of 18-karat white gold, with their backs to the wearer as they gaze at either day or night sky scenes on a rotating plate that coordinates with day and night hours. The regal creatures rest on a dial of pavé diamonds, as if lounging on a cloud.

With its heritage in jewelry making, Cartier is not above borrowing a few techniques to animate its watches. The brand’s Ballon Bleu Serti Vibrant evokes the tradition of diamonds set en tremblant, so that they “tremble” whenever the wearer moves. This trick from the jeweler’s bench originally used springs to add movement to gemstones, and the 123 diamonds on the dial of this limited edition of 30 pieces are also set onto tiny invisible springs so each one vibrates independently.

While butterflies, daisies, and peacocks may seem overly whimsical and exceedingly feminine, the high level of craftsmanship and complexity of the movements add seriousness—and collectibility—to these pieces. Women want watches made with all the care and ingenuity as those for men, but in this case the fun and imagination give them an edge.