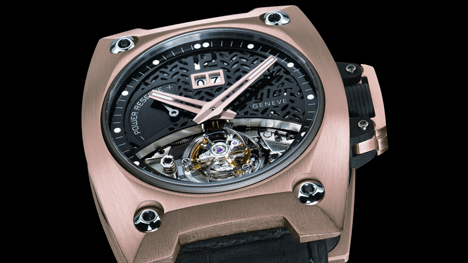 By dropping two timepieces from the top of the Eiffel Tower in 1956, Wyler Genève demonstrated a commitment to durability that even a skydiver could admire. The watches still worked following their freefall (as an on-hand notary attested) because of an invention patented by company founder Paul Wyler in 1927—Incaflex—which effectively built a spring into the balance wheel, and put Wyler in the history books.

Relaunched in 2007, Wyler is typical of the new wave of Geneva companies that are challenging the establishment with extremes of design or function. Wyler has pushed in both directions, using Incaflex as a springboard. “We wanted to go back to the company’s heritage,” says Wyler managing director Bruno Grande. “We wanted to create a new timepiece, with a modern design, that made more evident than ever the desire of Paul Wyler to build the most robust watch in the world.”

To accomplish that, the company set a movement equipped with Incaflex inside one of the most complex cases in the industry. The case is really two cases—a titanium and carbon-fiber inner cage suspended on four sprung screws within an outer shell made of titanium, stainless steel, or red gold. Grande compares this configuration to the sprung chassis of a car engine, which isolates the motor’s vibrations. “As we were working on the design, the liaison with the automobile became very strong,” he explains.

On the chronograph model, for example, the pushers were designed to resemble an accelerator. Even the watch’s materials, such as the tread-textured black rubber belt around the crown, were chosen for their automotive associations. And, for the true sports-car aficionado, Wyler commissioned a limited-edition model with the dial redesigned by Zagato, the Italian coachbuilder that has been souping up the likes of Ferrari and Aston Martin since 1919.

The automotive inspiration is destined to outlast the Incaflex balance wheel, according to Grande, who says that Paul Wyler’s signature invention will eventually be retired. “We wanted a link to the history of the brand, but the technology has evolved since 1927, and we are going to evolve as well. We don’t want to get stuck in this one concept.” Nevertheless, Wyler’s commitment to durability will endure, with new inventions to make watches sturdier than ever before. Already the spirit of innovation is evident in the Wyler tourbillon: The bridge is isolated on its own sprung chassis within the sprung chassis of the watch. “People will often put tourbillons in a safe because they’re so precious and fragile,” says Grande. “Ours is very strong, with a strong personality and a strong design. It’s made to be wearable, in keeping with what Paul Wyler would have done.”