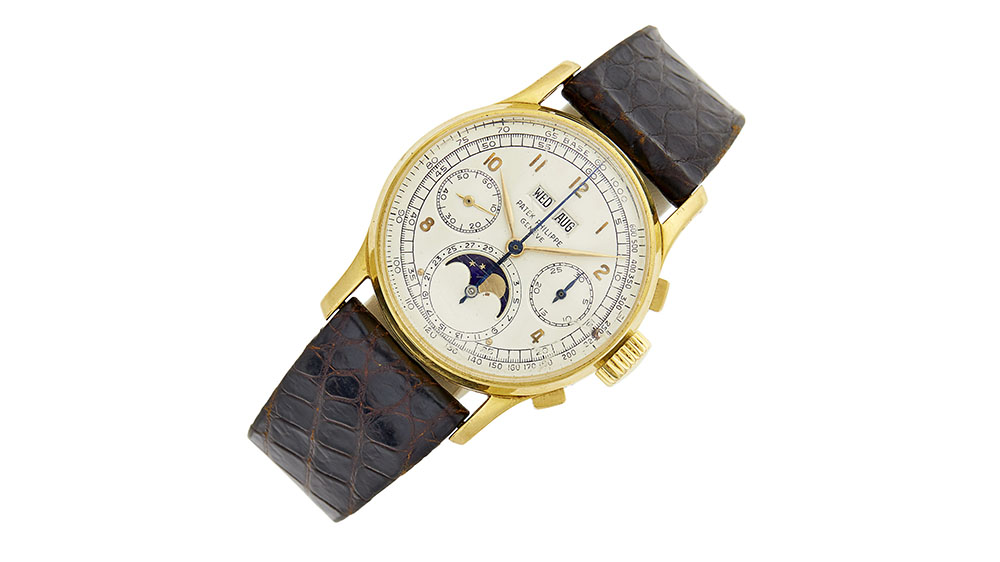 Now might be your chance to snag one of Patek Phillipe’s rarest and most historically important watches.

Next week a coveted Ref. 1518 Perpetual Calendar Moonphase chronograph will be auctioned off by Doyle as part of its Important Jewelry sale. It may not be the most exclusive version of the timepiece, but the sale still represents a rare opportunity to acquire something truly special.

The Ref. 1518 was introduced by Patek more than eight decades ago in 1941. It was the world’s first wristwatch powered by a serially powered perpetual calendar chronograph. The complex style of movement had previously only appeared in pocket watches before the Swiss watchmaker figured out how to fit one into something that could fit on your wrist. Just 281 examples would be made during the 13 years the watch was in production. Of those, 215 were in 18k yellow gold, 58 in rose gold and five in stainless steel.

The example being sold by the auction house has a case made from yellow gold—or, as it’s referred to in the sale listing, “Gentleman’s Gold”—and was originally purchased in April 1953. For a watch that’s nearly 70 years old, it appears to be in decent shape. It was actually worn, so there is light scratching to the case and buckle. The intricately patterned dial looks great, too, though there is a small deterioration spot at 3 o’clock and the moon phase sub-dial is chipped.

As good as the watch may look, there do seem to be some questions about how well it works. Doyle’s states that the movement is “currently running, but is not guaranteed to be in working order.” We imagine there are plenty of collectors who won’t mind taking a risk on it.

Doyle has placed an estimate of $100,000 to $200,000 on the timepiece. That may seem like a lot for a watch that may not work, but a genuine Ref. 1518 doesn’t go up for auction every day. Either way, even if bidding ends up on the higher end of that range, it’s still a bargain compared to a rose gold or stainless-steel example. Those have been known to fetch well over than $1 million.