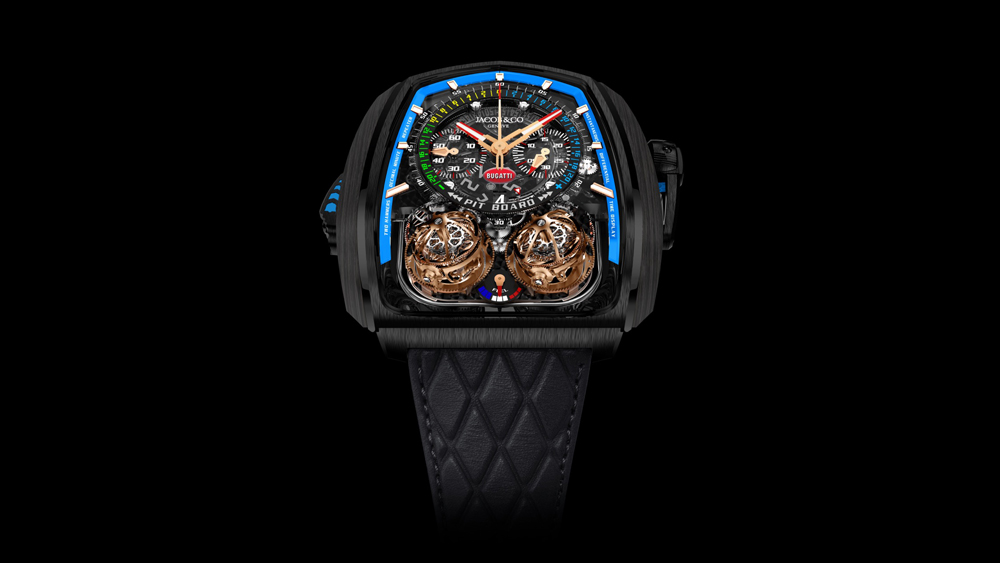 The wheels are in motion for a long-term partnership between French automaker Bugatti and Swiss watchmaker Jacob & Co. Last week, the two companies announced they would be joining forces to create ongoing collaborations together. The news comes on the heels of an announcement that Bugatti would be ending its long-term collaboration with another Swiss watchmaker Parmigiani—the two companies had been working together since 2004, with their most recent collaboration, a customizable Parmigiani Bugatti Type 390 Watch debuting just last year. But it’s a new era for Bugatti—the automotive company appointed president Stephan Winkelmann to lead the company in January of last year, heralding a new era for the company. That appointment boded well for Jacob & Co., which had already been exploring car partnerships for the past few years.

“I was always looking for a car partner, because I love cars,” Jacob Arabo, founder of Jacob & Co., told Robb Report. “I’ve loved them ever since I was a little boy. We had a meeting with Koenigsegg a few years ago, but that didn’t work, and we also had some discussions with Lamborghini during that time, but nothing came of it. The president who was there at the time [Stephan Winkelmann] moved to Bugatti, and he remembered me from that time and he came back to me. He said, ‘Now I’m ready for you for Bugatti.’ So we made a deal.”

Jacob & Co. had to get on the fast track to start producing timepieces for Bugatti—the partnership, which was only officially forged a few months ago, required that the watchmaker turn out several timepieces in celebration of Bugatti’s 110-year anniversary. That’s lightening speed in the watch industry, so Arabo said he used existing movements in his manufacture to deliver this year’s timepieces, which include a new version of the Twin Turbo Furious (launched at last year’s Baselworld in 2018) and a chronograph sports watch—both inspired, of course, by Bugatti.

“They made just 20 cars for their 110th anniversary, and they’ve already sold all of them,” Arabo said. “So they asked me if I could make 110 watches. I took my existing chronograph movement, and I already had it in mind to make a full carbon case, which I promised to give them exclusively. It has their flag on the back and their colors on the dial.”

But Arabo decided to up the ante for the timepieces that would be sold exclusively to Bugatti owners. “My idea from the beginning was to make one everyday, affordable watch at $36,000 for a man that doesn’t have to have a car to have a Bugatti watch and the other one is over $500,000—the Twin Turbo Furious Bugatti Edition,” Arabo said. The amped-up timepiece features a blue ring around the dial marked with white hour indicators as a tribute to Bugatti’s blue Chiron for its 110th anniversary. The Jacob & Co. logo is featured traditionally at 12 o’clock while the Bugatti logo is positioned at 6 o’clock. The 50-hour power reserve indicator, renamed “Fuel” for the Bugatti Edition, rests between two wildly impressive and technical double, triple-axis sequential high-speed flying tourbillons, a minute repeater and a monopusher chronograph with a reference time differential indication, which determines whether an elapsed time period is greater or less than a chosen point of time. In other words, the differential indication can help a racing driver measure whether his second lap time beats his first. The minute repeater on this time piece is also worth noting in that it differs from a traditional one by chiming the hours, quarter hours, and minutes in sequence—an invention first created by independent watchmaker Kari Voutilanien.

That is a whole lot of watchmaking going on, thus commanding a very big case at 57 x 52 mm with a height of 17 mm to house the architecture of its 832 components. But for everyday purposes, the most fun part of this watch is viewing the tourbillons in action (they rotate once every 24 seconds for the internal cage, 8 seconds for the intermediary cage, and 72 seconds for the external cage) on the wrist, which are about as statement making as pulling up to your local pit stop in an anniversary edition Bugatti Chiron. Subtlety, you see, is not the point. Showing off some seriously heavyweight mechanics is, however, the big idea here, which is why this partnership makes perfect sense.

Only 20 pieces of the Twin Turbo Furious Bugatti Edition will be made, and they will only be offered to Bugatti owners. That means you have to graduate to the big leagues to own this watch—not unlike how you must first purchase the Chiron before you can ever step foot in the Divo.

Bugatti owners that purchased Parmigiani’s dressier Type 390 will also find reasons to want to buy the Twin Turbo Furious. Along with its racing functions, the watch’s black DLC Grade 5 titanium and forged carbon casing offers a sporty alternative for clocking in speed.