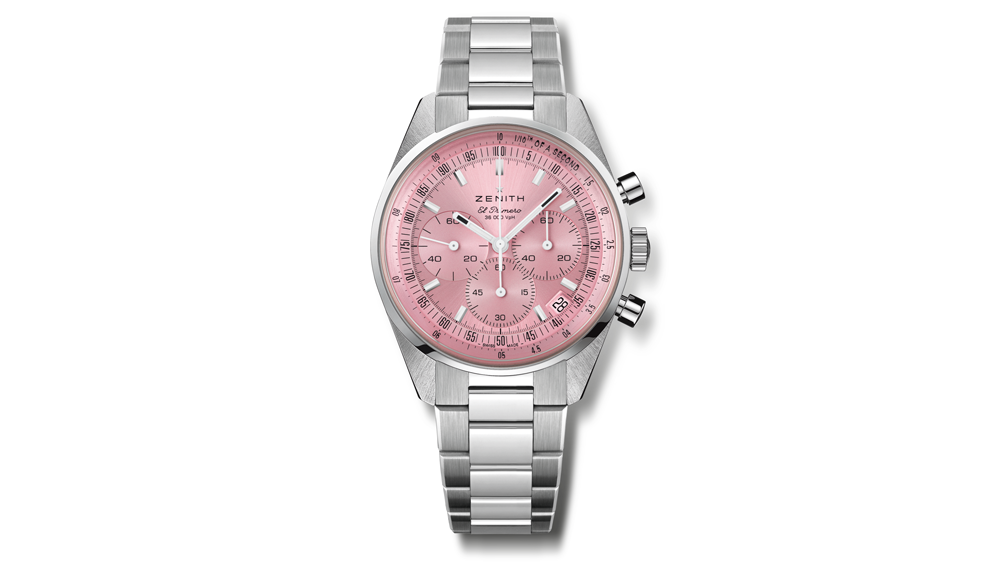 Back in October, Zenith launched a striking pink dial sport watch, the Chronomaster Original Pink ($10,000)—a unisex piece that played into the ultra-hot colored-dial trend. It was only available for that month, with 20 percent of the price of each timepiece purchased donated to the Susan G. Komen Foundation to combat breast cancer. But if you didn’t get your hands on one now is the time. Zenith is now offering seven pieces exclusively to Robb Report readers (the donation percentage to breast cancer still applies). Here’s why you might want to get your hands on one:

There are watches whose spirit can be captured in an image floating around the internet with some degree of accuracy—you see it in person and think, “Yeah, that looks like what I thought it would look like.” Zenith’s new Chronomaster Original Pink isn’t really like that.

A version of the A386 with a bright pink dial looks, quite frankly, a bit flat when viewing it on a computer screen on the company’s website. In person, however, its radial brushing combined with the concentric pattern on the subregisters truly pops off the watch in a bright, dynamic burst of pink that, well, sort of takes a grown man by surprise. In short, I want one. I think I’d wear the hell out of it.

Housed in a 36mm stainless steel case and paired with a matching bracelet with polished center links, this is, for the most part, a highly brushed, utilitarian-looking piece… until you get to that pink dial. With its outer tachymeter scale, triple-register chronograph layout, applied indices, and bright white baton handset, it’s clear that this is a tool watch through and through, but the arresting color scheme screams that there’s something else going on here.

Of course, the choice of color corresponds with the fight against breast cancer, of which Zenith is a staunch supporter. More specifically, Zenith selected the Susan G. Komen Foundation as its partner, and approached the American organization about the possibility of working together.

“Beyond the symbolism of supporting the Pink Ribbon and this excellent cause, we wanted to do something concrete, and if you want to get concrete, you need to go with the best players,” explains Julien Tornare, Zenith’s President and CEO. “We wanted to support Susan G. Komen because for us, it’s the biggest and the most active today in the fight against breast cancer. So the choice was quite simple.

Then when we got in touch with their management, they were so enthusiastic about the partnership, they loved the concept that we wanted to do, and they felt it was a great opportunity to do something together. I believe a lot in human relationships and how we click and connect—or not—and in this case, it was very natural and easy.”

Tornare was wearing the watch recently in Singapore during an event for the company’s DreamHers program, which celebrates gender equality and women’s empowerment by giving notable women who are excellent in their respective fields an opportunity to share their stories with the world. From British Extreme E champion Catie Munnings to virtuoso French classical violinist Esther Abrami, DreamHers brings together stars from across the globe to celebrate their achievements and to spread their message.

Of course, a bright pink chronograph isn’t going to be everyone’s cup of tea, but Tornare believes the constraints of gendered watches no longer apply. “It’s a very unisex watch today,” he continues. “It’s pink, yes, but it’s totally wearable by anyone.”

Speaking of which, there are big changes afoot at Zenith: You may or may not have noticed that the brand has completely done away with gendered watch collections, a long-time norm in the horological world that’s now seeing seismic shift towards unisex marketing in keeping with the times. But balancing the desire—the need—to support female-centric causes and female empowerment with a desire to create gender-neutral products is a delicate balancing act for a CEO like Tornare.

He elaborates upon the launch of the first DreamHers campaign, which coincided with the debut of a watch that was, at the time, marketed toward a female audience: “At first, we felt that we were missing the women’s segment in terms of sales and statistics and all that, and I really wanted to get the brand known among women. We thought we needed to bring a little bit of femininity into our watches—that’s how we launched the Midnight. And in my mind I came all the way with the DreamHers, with female empowerment, with gender equality, inclusion and diversity—all of those concepts. And I said you know what, if I push it further, why would we call Midnight a women’s line?

This is the typical way in watchmaking, by the way; you always had a women’s collection, a men’s collection—sometimes catalogs were even different. And I thought, if we really want to have a 21st-century conversation, we should stop talking about it this way. When I first started, I had quite a few people in the company saying, ‘No, Julian, you can’t do that. This one is small and has diamonds, this one is big and macho…’ I said, ‘Guys, this is the past!’

I even had in the industry, in the first interviews I did, people who said, ‘No way! How would someone buy this watch for a man…” But why would you [someone in the industry] decide that—the client should decide that! So this [doing away with gender] came a little bit later, and I said okay, Midnight is 36mm, a diameter that’s extremely popular for men, in Asia and in many places in the world.”

Indeed, certain of these preferences are country- and region-specific: “Diamonds: In Europe, and especially in Switzerland, diamond watches aren’t worn so much by men—but they are in many countries in the world,” sayd Tornare. “So again, either you think as a narrow-minded guy, or you think about the world and you say, you know what, we’re gonna stop this. And that’s how we came up with the idea to say that we’re unisex, and to stop talking about gender [in terms of watch collections]. But of course, we still support women’s empowerment and gender equality.”

If the Chronomaster Original Pink catches your eye act fast and get one of the remaining seven pieces now.