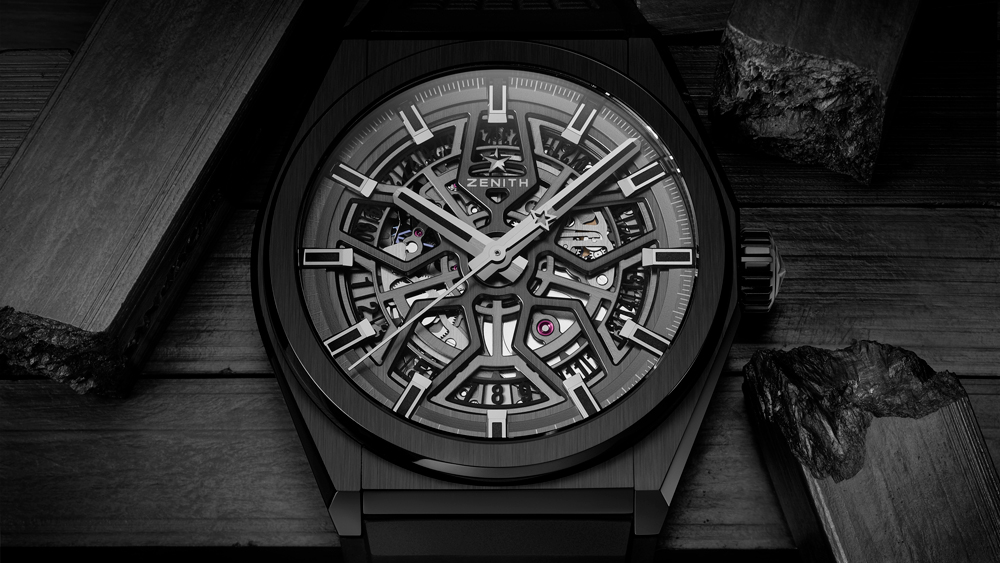 Another blacked out timepiece for 2019 has just been unveiled. The style has already been popular among watch customization brands like Bamford and MAD Paris, which are known for giving a makeover in a black coating to popular styles from major watch brands. Zenith, who officially collaborates with Bamford as of last year, is taking a page from that playbook and making it its own with the new Defy Classic Black Ceramic ($7,500). (The brand also released an all black Pilot Type 20 Chronograph in October.)

The watch marks the first time that Zenith has used ceramic in its Defy Collection, a line which has been and will continue to be a major focus for the brand under new CEO Julien Tornare. The watchmaker is looking to lure in a younger audience by creating more modern, or even futuristic looking in this case, designs. The idea, according to Tornare, is to touch on elements of the brand’s immense history while not being a slave to it, and this watch does just that. The case design of the watch is similar to the original Defy watches from the ’70s, but its geometric openworked dial housed in a tough black zirconium oxide ceramic is anything but retro.

While the watch looks complicated, it is a simple three-hand watch with a day date. The faceted hands and applied markers are almost camouflaged against the intricate-looking dial—for the modern consumer, watches are more of a show piece than a functional necessity after all. But the time becomes more legible come nightfall when the watches Super-LumiNova SLN C1 coating illuminates the hands and hour markers.

The watch is equipped with the automatic Elite 670 movement, a Zenith staple, which this time around is enhanced by a silicon pallet-lever and escape-wheel for improved performance. The 41 mm watch is slimmer than you might image at just 3.88 mm and comes with a black rubber waffle patterned strap with a DLC folding buckle for a sharp looking sports watch that wears easy on the wrist.

The watch is a visible example of Tornare’s turnaround plan for the brand as it looks to up sales and target new clientele in the vein of the success of its fellow LVMH watch brands, Tag Heuer and Hublot. Former LVMH watch brand president, Jean-Claude Biver, appointed Tornare to his role just prior to stepping down from his role. Biver is a watch industry legend for his Midas touch, and it looks like with the appointment of Tornare, whom he hired from Vacheron Constantin, he may just have one more successful trick up his sleeve.