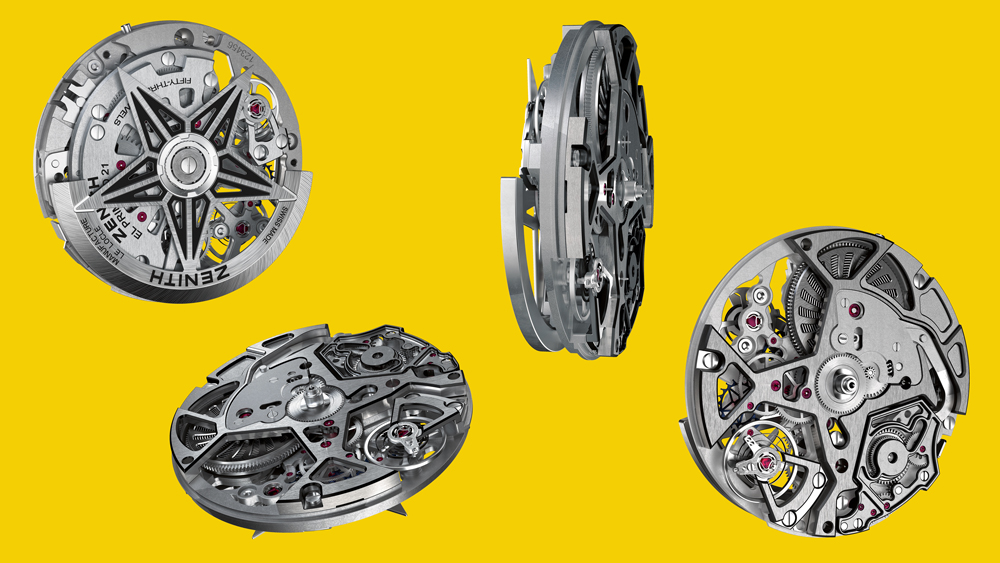 “Last year when Jean-Claude Biver decided to relaunch Zenith, he asked me, ‘Do you have any ideas to improve technical projects at Zenith?’ ” says LVMH’s Guy Semon. “I told him, ‘Mr. Biver, El Primero was invented in 1969, beating at 5 Hz. Why not reinvent the El Primero nearly 50 years later?’ ” The conversation above would be standard stuff in the executive suites of Swiss watch brands—except for the fact that Semon, who is recognized as perhaps the top technical mind at the stable of LVMH brands managed by Jean-Claude Biver, has never formally worked for Zenith. Semon is instead general manager at sister brand TAG Heuer, where for the last 10 years his cutting-edge chronograph projects have gained widespread notice, despite their relatively small scale.

Chronographs, of course, are also the house specialty at Zenith, and its brand equity remains firmly footed on the outstanding reputation of its El Primero movement. But after a half century of service, El Primero’s fame as the first movement to employ a higher 5 Hz frequency for better accuracy has started to dim. An injection of energy—technical or otherwise—was in order. Fortuitously, most of Guy Semon’s research work at TAG Heuer was also in the field of high-frequency chronographs, making a perfect opportunity to apply knowledge to Zenith under the auspices of the LVMH R&D Institute, an interbrand technical facility located right next to the TAG Heuer factory in La Chaux-de-Fonds.

“The principle is the same, but the architecture and components are totally different,” Semon says. “We start with the same El Primero from 1969 to keep the DNA of the movement. The system is beating at 5 Hz. You have exactly the same gear train and barrel, except we have corrected a few imperfections, particularly the geometry of the gear teeth [for more efficient energy consumption].” The second 50 Hz gear train Semon added for the chronograph is entirely new and is engaged, not with a clutch like conventional chronographs, but with what Semon calls a “launcher” that together with a brake is installed directly against the 50 Hz balance wheel. “It’s efficient. Very, very efficient,” he says.

The new version eschews a clutch for the gear train in favor of a launcher pressed against a 50 Hz balance wheel  Photo: Courtesy Zenith

Semon reserves special enthusiasm for the advanced composite hairsprings his team has developed for the new movement. Composed of a matrix of carbon nanotubes and graphene, the new hairspring will be Zenith’s proprietary design that is highly resistant to magnetism and temperature variations like many of the best silicium examples currently in use. Like silicium parts, Zenith’s carbon hairsprings are made with a photolithography process, but one that grows the parts on a silicium wafer, rather than etching them from one. A complex series of chemical and gaseous baths and reactions grow the composite at a molecular level and give it outstanding flex characteristics.

While many of these developments smack of the countless exercises in technology that have been premiered in high-priced watches, the most significant quality to the work Semon and his team have done for Zenith is their eye for industrialization. These features can be found in the new Defy El Primero 21, a watch that retails in the neighborhood of $10,000. The precision timing fits well within the company narrative, and the skeleton layout and dynamic, fast-rotating center seconds display will appeal to anyone attracted to modern looks and performance.

“Our intention is to relaunch the brand around innovation,” says Julien Tornare, Zenith’s newly appointed CEO, who has already presided over the delivery of Defy El Primero 21 as well as the launch of an experimental new oscillator that could take the brand into even more interesting future territory. “We’re not going to forget the brand’s history, but we’re definitely going to work in the 21st century.”