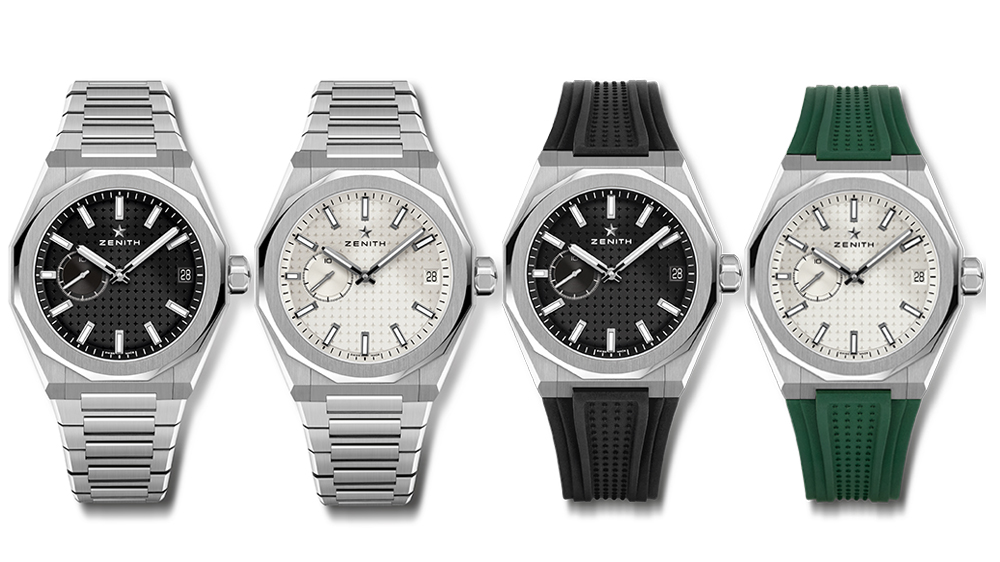 When Zenith CEO Julien Tornare showed us a sneak peek of the new Defy Skyline in Geneva in November, he explained what motivated him to introduce what he is referring to as the new flagship Defy line. A few months earlier, he was getting ready to celebrate the 50th anniversary of the El Primero movement, and was casting about for inspiration when an idea came to him: He would call together the original team of eight men who conceived the legendary high-frequency caliber in 1969.

He invited them for lunch at the Le Locle manufacture, where some of them had worked for decades. “The youngest was born in 1945. The oldest, in 1939,” he tells Robb Report. “They were all in their 80s. It was such a privilege to have them there in the same room.” Tornare couldn’t have been more surprised by the outcome. Instead of reliving the glory days of the birth of the El Primero and dwelling on the past, the group of eight threw down the gauntlet in a manner, urging Tornare to move on.

“They told me clearly: Julien, it’s fantastic, but don’t only repeat what we did. Continue to build new things,” he says. “Some purists might tell you, ‘Oh, but you disrespect the past,’ but this is wrong. By moving forward you respect what we did. If you only repeat the past, you aren’t respecting us, you’re just copying us. They were telling me: OK, we did this, now you do something.”

It was a revelation for Tornare, but also an affirmation. “When they told me to concentrate on the future, it made me even more comfortable about what we are doing with the Defy collection. It has been around since the 1960s, but it represents the future for Zenith, and the team we have now working on it are exactly like these gentlemen were in the 1960s … dynamic, ambitious, looking ahead. We were starter-uppers when we launched the El Primero and then it became tradition. Defy is our new startup. It will be the tradition of tomorrow.”

Enter the new Defy Skyline, which itself is unlike anything else in the Defy line. As a symbol of innovation for Zenith, Defy has included wild color schemes, concept movements and new materials, all of which differentiate it from the iconic tri-color register design of the Chronomaster series. (“Just because you are 156 years old, doesn’t mean you need to dress like a grandmother,” says Tornare).

The new Skyline, however, is a minimalist, robust entry into the hotter-than-George-Clooney three-hand, steel sports watch market. It differs from the others in a big way, though: it has the speediest seconds hand in the business. The Skyline makes use of the same 3600 base caliber used in the Chronomaster and some Defy models—the 36,000 vph chronograph that times accurately to 1/10th of a second, based on the original 1960s issue that made Zenith famous. In the Skyline, however, the movement is modified to “defy” expectations by applying the 1/10th of a second feature not to a chronograph function but to a small-seconds function. The result is caliber 3620, with a dizzyingly fast seconds indicator that rotates once every 10 seconds on a subdial at 9 o’clock. It’s a feature no other three-hand sports watch has, and with a price of $8,400, it compares well to what you’d pay for a steel Patek Philippe Nautilus or Audemars Piguet Royal Oak.

The name Skyline reflects the model’s strong architectural aesthetic, with its 12-sided bezel and star-patterned dial engravings and star-shaped rotor on the back. “It’s like an urban skyline, with skyscrapers and lighted buildings,” says Zenith product manager Romain Marietta, referring to the illuminated wide markers and hands. “It also draws inspiration from the starry night sky, and it reflects the heritage of our Zenith star logo.”

“The small seconds feature was always a way to essentially show that the watch was working,” says Marietta. “But it does more than that here. It shows the heartbeat of a remarkable movement. It’s a unique complication that reflects our heritage as a master of high-beat mechanisms. A high-frequency movement is also an asset in terms of robustness—the faster the movement, the better the shock absorption.”

The Defy Skyline, with a 41mm steel case, comes with a black, white or blue sunburst dial. Each comes with an additional rubber strap in dedicated colors, which are easily swapped out thanks to Zenith’s push-button quick strap change mechanism. Marietta says there is a skeleton edition coming shortly, and although for now, the dramatically nimble small seconds hand is located in a subdial at 9 o’clock, future editions will reposition the subdial at 6 o’clock or even some other position. It isn’t likely to be on the central dial anytime soon, however, because “the weight of the seconds hands would impact the precision and accuracy,” says Marietta. “And we wouldn’t be able to ensure the 60-hour power reserve. We will have to try out some different materials. We’ll experiment.” And so the Defy story continues.