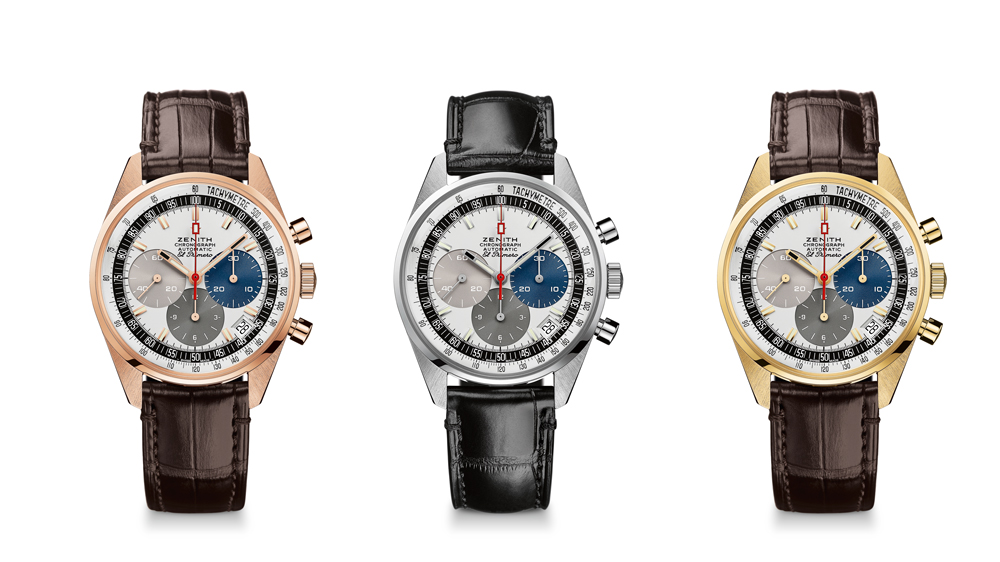 At Baselworld, Zenith followed up its retro El Primero timepiece, introduced as a part of a collector’s box set at SIHH to celebrate its 50th anniversary, with new models for those that couldn’t get their hands on the first wave. The trio of watches in the box set—one mimicking the original timepiece, a modern version, and one meant to represent the movement’s future—were limited to just 50 pieces. At a time when the thirst for vintage timepieces is seemingly at its pinnacle, the edition that most closely resembled the original was, of course, the favorite. Only the almighty metal-of-the-moment, steel, was available to those that bought the box set. Now Zenith has come back with new iterations of the 38mm x 12.6mm model in white gold, rose gold and yellow gold. You can safely assume that these are, most likely, already spoken for, but it’s important to know the history of the movement to know why collectors are so hungry to get their piece of the El Primero pie.

The Zenith El Primero was launched just over 50 years ago, on January 10th, 1969. At the time, the company was still known as Zenith-Movado, and it had spent seven years developing the El Primero’s movement, the first high-frequency (36,000 vibrations per hour) automatic chronograph on the market. It managed to beat Seiko and the Chronomatic Group (which was comprised of Hamilton-Buren, Breitling, Heuer and Dubois Dépraz) in the race to put this innovation on collectors’ wrists. But later the same year, Seiko unveiled the world’s first quartz watch, kicking off the quartz crisis that almost obliterated the mechanical watch industry. Two years later in 1971, Zenith was sold to Zenith Radio Corporation, the Chicago-based manufacturer of radios and TVs. By 1974, it would stop producing the El Primero.

Since then, Zenith watches has struggled to separate its name from the TV business, despite having been sold in 1978 to Dixi, a company specializing in machine tooling for watchmaking, and later to LVMH at the turn of the century. But there’s a solid core of watch enthusiasts who have an appreciation for the brand and its place in watchmaking history—and it’s with this heritage (and its recent limited editions) that Zenith will once again grab the attention of the larger public.

So why is the El Primero still such a big deal? Because it quite literally served as a template for other watchmakers to develop automatic chronographs of their own. Zenith watchmaker Charles Vermot realized the importance of the movement and safeguarded the tools necessary to make the El Primero in 1976, with hopes that mechanical watchmaking would one day make a comeback. He didn’t have to wait very long. In the early ’80s, Ebel and Rolex played a major role in reviving the El Primero. Ebel was first in 1981, when head honcho Pierre-Alain Blum wanted to offer an automatic chronograph in his catalogue. Rolex followed, signing a 10-year contract with Zenith to equip its Daytona models with the El Primero calibre. Vermot’s tools allowed Zenith to quickly restart production on the scale Rolex required. The first Rollies equipped with an El Primero movement debuted at Baselworld in 1988.

You may wonder how Vermot was repaid for his brilliant foresight. The watchmaker received an El Primero chronograph, an invitation to “a nice dinner” and a special trip, according to Zenith. Seriously small potatoes for a man who was single-handedly responsible for the revival of the El Primero. The tools he saved not only ensured the brand’s deal with Rolex, but also restored the entire Zenith manufacture when it began to produce new watch models with its historical in-house caliber.

The El Primero Daytona Rolexes have since become collector’s watches. When the Rolex El Primero Daytona Ref. 16520 was released it cost about $3,300. Today, it retails for over $20,000. The new trio of Zenith El Primero throwbacks know the worth of their weight in gold—they retail for 19,900 CHF (approximately $19,900 at current exchange). You can bet that one day these timepieces, limited to 50 in each metal, may see an ROI that could be as impressive as a Ref. 16520’s is now—if the enthusiasm for watchmaking history continues at its current trajectory.

Want a piece of vintage Zenith for your own collection? Right now you can find some of the older models at affordable prices like a steel AH 781 for $2,900 at Wind Vintage, a steel Rainbow Flyback for $4,400 at Crown & Caliber, or an 18-karat rose gold Chronomaster from WatchBox for $10,950.

A look at those models, and other important highlights from Zenith’s long history, below.

Charles Vermot in the 1980s  Courtesy of Zenith