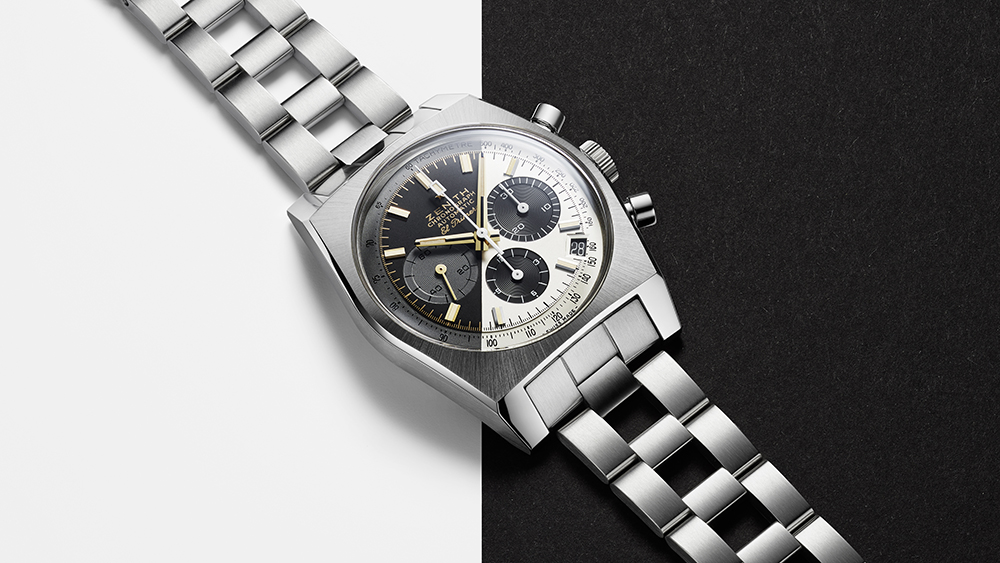 Here’s something you don’t hear about every day: a Swiss watchmaker and a Japanese anime series teaming up to launch a limited-edition range of timepieces. But in 2019, Zenith tapped the manga series Lupin the Third to do just that. Following the release of two special editions from the partnership, the watchmaker’s third and final piece from the series has arrived.

The Chronomaster Revival Lupin the Third–Final Edition features a titanium barrel-shaped 37 mm case whose contrasting dial is half black and half white. The semi-glossy black side features gray counters with gold applied markers and hands. On the other white half, contrasting black counters are featured with beige Super-LumiNova. Limited to just 250 pieces, it’s based on two Zenith models featured in the animated show.

Lupin the Third started out as a manga comics series in 1967. Shortly after, in 1969, Zenith’s El Primero was introduced as the world’s first high-frequency automatic chronograph movement. According to the watchmaker, the series creators were so inspired by the El Primero that they featured it in the first and final episodes of the debut season, which premiered in October 1971. Created by the artist Monkey Punch, the show is centered around Arsène Lupin III, an internationally wanted thief. He’s joined by Daisuke Jigen, a marksman, and Fujiko Mine, who plays Lupin’s love interest. Together they challenge or rob other nefarious groups; it’s Jigen who is seen sporting two Zenith watches.

Nearly 50 years later, Zenith produced the first Chronomaster Revival Lupin the Third watch using the A384 tonneau-shaped case depicted in that first episode along with its unusual black dial. Then in 2020, the following year, the second special-edition timepiece was released with, you guessed it… a white dial sporting the same panda-style configuration shown on the newest release.

Like the former editions, the new model includes a tachymetric scale, three chronograph counters and the El Primero movement; which has a frequency of 36,000 VpH and a healthy 50-hour power reserve. Creating its unique dial was more of a challenge. During production, a blank dial is finished in a silvery-white color on its right half, then the black chronograph counters are milled while the rest of the dial is protected with a layer of transparent and colorless lacquer.

Applying a third grey color to the darker side of the watch’s counters is another painstaking step that made it even harder to craft perfectly. Reproducing the dual-dial effect for an entire series the brand admits “proved nearly impossible, the uniquely intriguing result made it well worth the effort.”

Whether you missed out on the first two releases or want to complete your set, you can preorder the Chronomaster Revival Lupin the Third – Final Edition now for $10,000 on Zenith.com. Orders will be delivered by March 31st, according to the website.