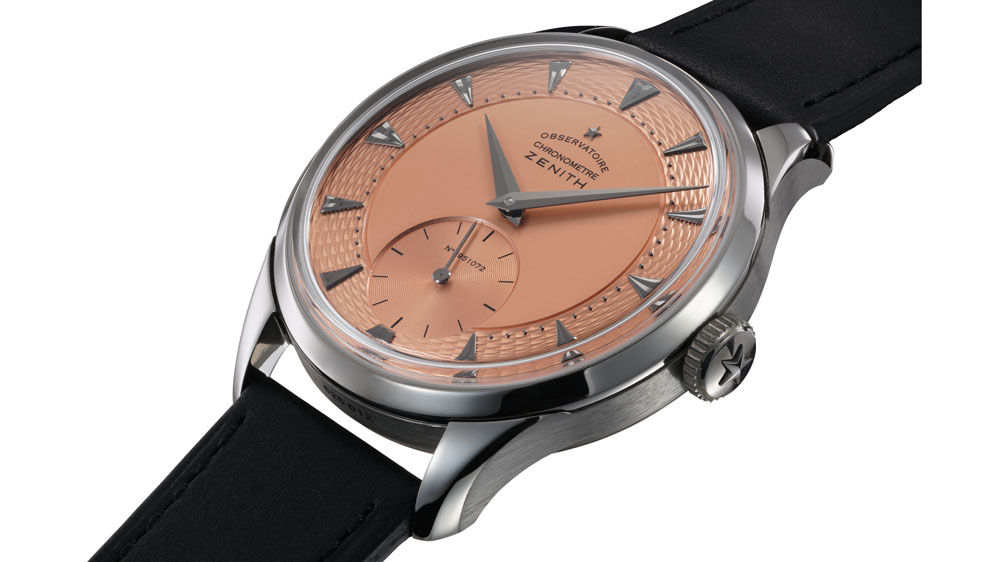 Collaborations are all the rage in the luxury world, but some deserve more attention than others. The Zenith X Voutilainen X Phillips Niobium Cal 135-O is one of those exceptions. That’s because the unique piece houses one of Zenith’s rare observatory chronometer movements—a caliber never intended to power a commercial timekeeper and therefore, one you will never see in the wild—and it’s coming up for auction this November at Phillips.

“We first made the movement in 1949, and from 1950 until 1954 it won the top chronometry prize five years in a row,” says Zenith CEO Julien Tornare. “We were the only ones to have done that, and it’s never been done since.” Tornare’s team found a batch of the movements—11 to be precise—stored at its manufacture, where they had lain dormant for decades. He decided to restore them and bring them back to life in the form of special-edition wristwatches. The first 10 were sold by Phillips in Association With Bacs & Russo last June. The 11th was reserved as a special piece which will be sold by the auction house on November 5.

These special chronometer pieces are revered by collectors, so Zenith enlisted the help of star independent watchmaker and finishing expert Kari Voutilainen, one of whose specialties is restoring vintage observatory chronometers. “My first choice for restoring the movements was Kari,” says Tornare. “We went to him and shared this treasure we had, and I thought he would be too busy – his watches are already pre-sold through 2028—so I was expecting a ‘no.’ But he liked the project so much, he said, listen, if it’s just 11 watches, I can do it.” Zenith and Phillips introduced them at a private event in Geneva, and within an hour and a half, they were all sold. “These 10 people, they know they have something that nobody can have and nobody will ever have,” says Tornare.

In fact, Voutilainen’s lauded Obseravtoire watches, which propelled him into the spotlight, were inspired by a single client’s wish to have a watch incorporating an old Peseux 260 caliber—an observatory-competition movement used by brands for entries in chronometry competitions—in a time-only watch with straight lugs. Between 1945 and 1968, a handful of elite Swiss watch brands including Zenith, Patek Philippe, Vacheron Constantin and Omega, participated in an annual movement accuracy contest called the Neuchatel Observatory Chronometer competition. These movements were never made to be cased; they were like super calibers, built only for the purpose of competition. Like finely tuned Formula One racecars, they contained precisely engineered gears and pinions – before the age of silicon components –designed to minimize friction and optimize precise gear meshing. Above all, they had finely tuned regulating systems, including large, micro-adjustable balance wheels that produced near-perfect stability in a wide range of temperatures, created for the sole purpose of being tweaked for the greatest possible performance. A properly adjusted observatory-chronometer wristwatch from that era is still likely to outperform all but the most specialized modern-day mechanical movements. During the entire 23 years of testing in the Neuchatel competition, a total of 5,093 wristwatches were submitted for certification, and only 3,253 were passed. Anything that qualified to compete was rated as an official observatory chronometer. Finding one today is a rare occurrence.

In November, someone will have the 11th. The case of the special edition version is made of niobium, a metal with a unique sheen that is rarely used in watchmaking. The spectacular salmon guilloché dial was decorated by Voutilainen. The watch will be sold a the Geneva Watch Auction XVI at the Hotel La Réserve, with all Proceeds to Benefit the Susan G. Komen Foundation for breast cancer research and awareness. It is estimated to sell for between CHF 100,000-200,000 (about $101,000-202,000).

Incidentally, if you miss out on this piece, other highlights of the sale include an extremely rare Patek Philippe Ref. 1518 perpetual calendar chronograph in pink gold; a yellow gold Patek Philippe Ref. 2499 – the successor to the Ref. 1518; a selection of Paul Newman style Rolex Daytonas, one with a rare lemon dial; an exceptionally rare watch by George Daniels; and a piece by celebrated independents F.P. Journe and Philippe Dufour.