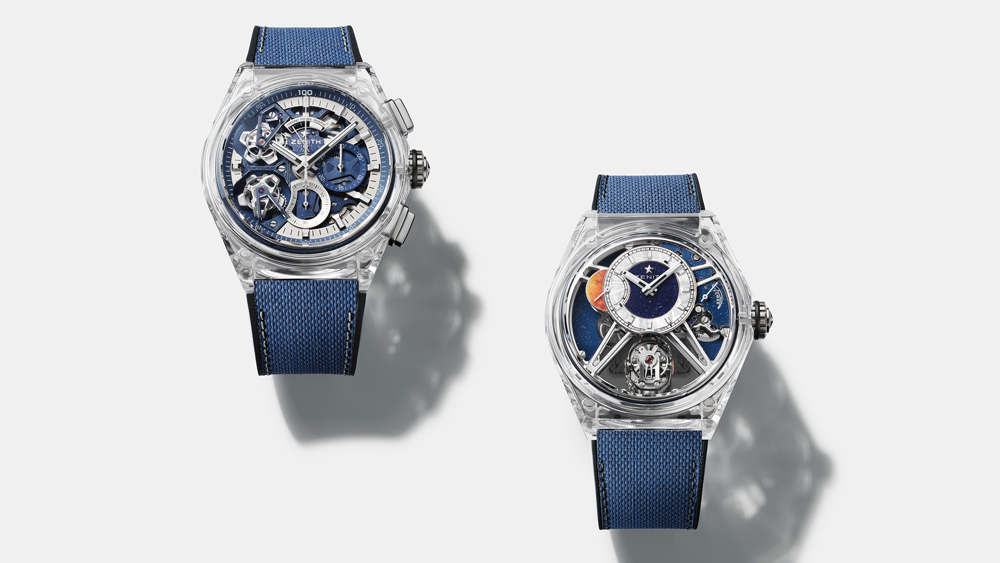 Zenith is literally reaching for the stars.

The Swiss watchmaker just debuted two new high-horology timepieces, the 46 mm Zero Defy 21 Tourbillon Sapphire ($180,300) and the 46 mm Defy Zero-G Sapphire ($159,700), both outfitted, as their names suggest, in sapphire crystal in architectures that reimagine two of its elite movements. If that’s not enough fireworks for you, each limited-edition piece comes with a high-octane adventure on a parabolic flight which will allow owners to experience the zero-gravity weightlessness of space.

But before you take off in the sky, here’s a reason to get high on earth: The El Primero 9020 automatic caliber of the Defy 21 Tourbillon Sapphire and the El Primero 8812 S of the Defy Zero-G Sapphire are both highlighted in blue PVD with decorative elements like miniature star engravings on the bridges, which are then finished with a rhodium-colored PVD treatment on the chamfered edges. The sapphire crystal offers a 360 degree-view of the structures and their technically challenging finishing, so each watch wears like a mini-exhibition on the wrist.

Chronometric precision, however, is the main exercise in the Defy Zero-G. Its Gravity Control mechanism features a regulating organ fixed to a gimbal that remains in a flat position. So, what does that mean exactly? The watch maintains time as precisely as possible no matter how the watch is rotated or jerked around on the wrist. In the latest version of this technology, Zenith has restructured the movement to offer a bigger wow factor to its visual appeal. Plus, its sapphire crystal allows it to now be viewed from all angles.

The company’s watchmakers didn’t stop there. The handcrafted dial—made from a mosaic of meteorite, aventurine glass and miniature painting—further drives home the message that this piece is intended to be an out-of-this-world offering. Mars is represented on the small seconds, which is partially eclipsed by the hours and minutes dial. The latter hovers over star-shaped bridges that stretch across the dial. And, while the gyroscopic module at 6 o’clock is enough to geek out on just by itself, flip the watch over and you will find it has been decorated with a cratered texture to evoke the surface of the moon. You can also get a full view of the back of the mainplate and bridges which have been coated in a blue tone with contrasting gray chamfers. These too are sprinkled with decorative stars.

If tourbillons are more your bag, the Defy 21 Double Tourbillon Sapphire offers not one but two (located between 7 o’clock and 11 o’clock), which operate independently and complete rotations in 60-seconds each—one for the time-keeping and one for the chronograph. This is one of the fastest tourbillon chronographs on the market at 1/100th of a second and like, the Defy Zero-G, it comes with the same attention to detail in terms of finishing. The mainplate of the movement is finished in blue PVD, a first at Zenith, while some of the bridges on the dial-side come engraved with a smattering of stars.

But here’s the clincher…both models are limited to just 10 pieces each and the lucky few that snap them up in time will get an experience they won’t soon forget. Clients who purchase either the Defy 21 Double Tourbillon or Defy Zero-G Sapphire watches will be invited to the Novespace facility, a subsidiary of the French National Space Center, in Bourdeaux, France in February of 2022 to meet with instructors before taking a parabolic flight to experience weightlessness in zero gravity. And it won’t be just for a blip on the radar. Each flight will consist of 15 parabolas or, in other words, 15 curves of ascending and plunging to replicate the feeling of being in space multiple times over. French astronaut, Jean-François Clervoy, will also be on hand to speak to the crowd about his own experiences. Just don’t hit the bottle at the neighboring vineyards before going high in the sky, if you plan on coming back down to earth in one piece.