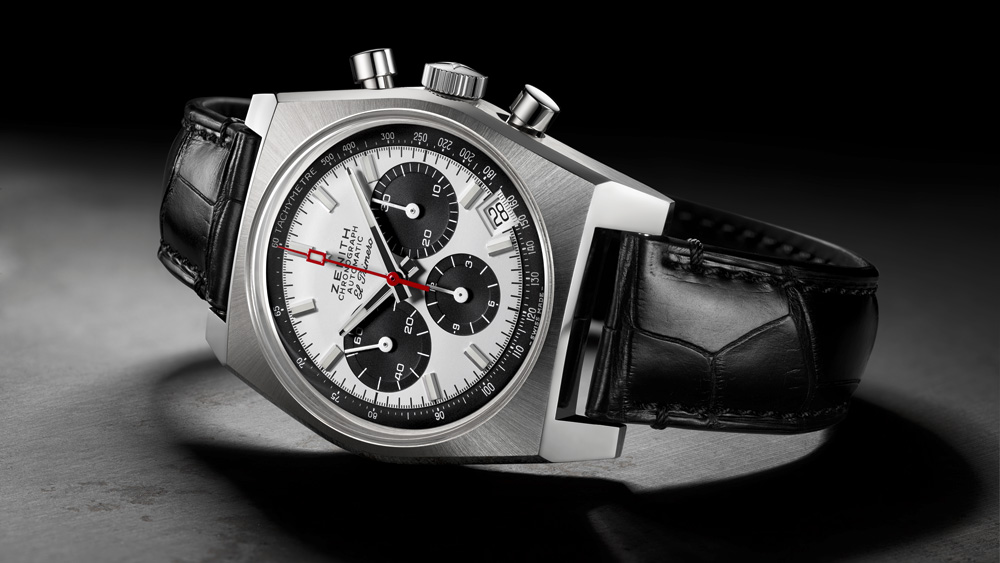 Zenith has a new El Primero watch on its hands in continuation of the watchmaker’s year-long celebration of the famous movement’s 50th anniversary. At the beginning of the year, Zenith offered a special box set of three watches highlighting the El Primero throughout the years; it swiftly sold out in a limited run of just 50. At this year’s Baselworld watch fair in March, the brand came out with three models based on the retro version in the box set (the A386) in white gold, rose gold, and yellow gold, each limited to 50, that have also already sold out. The good news is that those of you looking to get your hands on a modern, but vintage-looking, Zenith El Primero now have a third chance with the newly released A384 Revival ($7,600)—a remake of the first watch to feature the El Primero movement. Although it is not limited like the previous models, you better act fast if you want one because this will be the last retro El Primero timepiece in the series so they will likely still be hard to get.

Every single component of the A384 is faithful to the original. Zenith digitized the vintage A384 in order to carefully reverse engineer every single piece from its faceted steel case to the lacquered tachymeter dial. The only updates were the use of sapphire crystal instead of acrylic glass and an open caseback instead of a solid steel version. It comes on a black leather strap with a rubber lining, but an integrated metal “ladder” bracelet can also be purchased in order to exactly mimic the original.

The new watch was unveiled last night at a venue in the LVMH tower between Madison Avenue and Fifth Avenue in Manhattan to a group of journalists and retailers. “We’ve been organizing these events all over the world starting in January with Milan and then onto London and Tokyo, etc.,” said Zenith CEO Julien Tornare, who joined the company two years ago. “Next week we’ll be in Vienna and then Shanghai—it’s a bit of a world tour to talk about this movement and to talk about the history of the El Primero and Charles Zermot, who was responsible for saving it from destruction. It’s important we pay tribute to this man.”

When the quartz crisis hit the watch industry in the ’70s one Zenith manufacture employee with astounding foresight began hiding away all of the components needed to build the brand’s famous El Primero movement—also known for powering Rolex Daytonas in the late ’80s—in hopes that a renaissance of mechanical watchmaking would eventually restore the craft. He hid the parts, destined for the dumpster by company mandate, away in an attic in Zenith’s manufacture in 1976. That employee was Charles Vermot and he was singlehandedly responsible for reviving the El Primero and putting Zenith back on the map in the early ’80s when Ebel and Rolex came calling for a mechanical movement to power their automatic chronographs.

“My father had actually already retired when Zenith called him to see if he knew anything about the El Primero,” Michel Zermot (Charles Zermot’s son) told the Robb Report. “Our family knew nothing about what he had done. It had taken him six months to hide all of the parts and he never told anyone. He would do it after work hours and during that time he was always coming home late. My mother actually suspected he might be having an affair. When he finally told us what he had done, I was very proud of him but also retrospectively a little bit scared of how much he risked at the time.”

As a result of the anniversary and a renewed interest in watches from the ’60s and ’70s, vintage models of the El Primero have been commanding higher and higher prices at auction.  When it comes to Zenith, it seems all good things come from the attic—several years ago watch journalist and collector Gary Girdvainis got his hands on an original A384 for $500 from a widow who had found it in her husband’s attic in a safe. “It was one of four Zenith watches that I bought from her in 2003 or 2004 in different conditions and rarities,” Girdvainis says. “I sold three of them to the previous Zenith CEO, John Frederic Dufour, who is now at Rolex. But I hung onto one, an A384 which had an original protectant wrapper that had melted onto the watch. It had never been worn—literally new old stock. I tried to sell it to Zenith for about $12,000 three or four years ago but they didn’t want to buy it.”

Girdvainis later sold it to a private collector friend for $23,000—money that would go on to fund his reboot of iW (International Watch) magazine. That collector put it up for auction this year at Phillips at the Geneva Watch Auction Nine on May 11th and 12th where it sold for a hefty CHF 40,000 (approximately $40,000). “I sincerely hope whoever bought it at auction puts it in a safe for another 50 years,” Girdvainis says. “Can you imagine how much it will be worth then?”