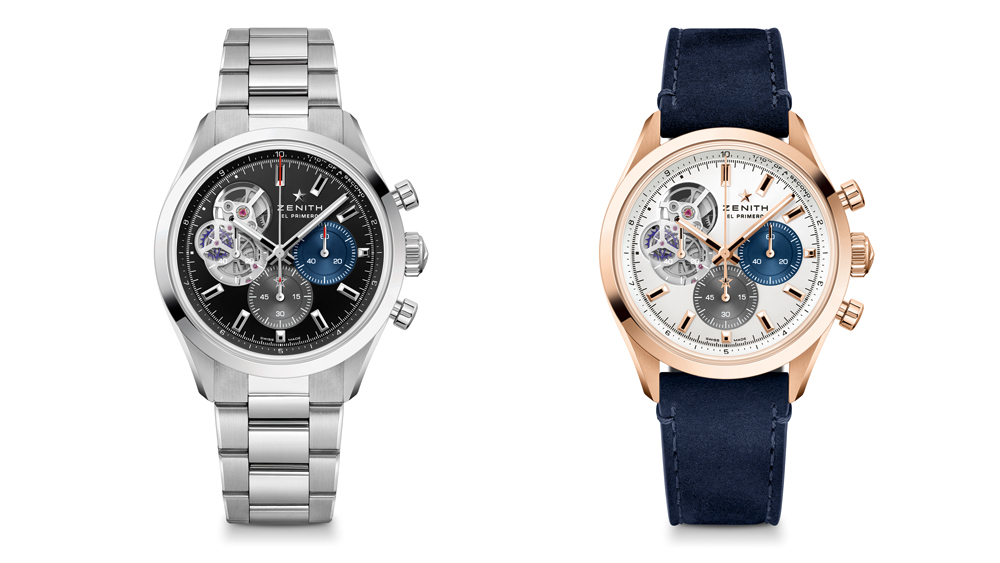 On a Tuesday evening earlier this month, in an exhibition space overlooking Wilshire Boulevard in Beverly Hills, dozens of watch lovers hovered around a series of display cases, admiring a curated selection of 15 vintage chronographs by the Swiss watchmaker Zenith.

“To see these pieces, you’d normally have to go to Switzerland,” Greg Simonian, president of Westime, the retailer hosting the exhibition, told Robb Report.

First staged in New York in June, the “Master of Chronographs” exhibition was designed to draw attention to Zenith’s 157-year history of making precision movements. In a central display, three chronographs from the late 1960s and early ’70s commanded the lion’s share of attention, for each one housed Zenith’s crowning achievement: the landmark 1969 El Primero, the world’s first self-winding, fully integrated, high-frequency chronograph caliber.

To horology buffs, the story of how Zenith made—and later saved—the El Primero is canon. But among newcomers to the category, the Zenith name may still call to mind radios and TVs produced by an American electronics company that challenged the watchmaker’s trademark in the US, preventing it from establishing a foothold in the American market for much of the 20th century.

To hear Simonian tell it, however, all of that is now officially ancient history given the watchmaker’s extraordinary, pandemic-era rise to prominence.

“For all the time I’ve known the brand, I haven’t seen this much press, or this much growth in America,” Simonian said. “The ascent has started, and my guess is that it’s in the early stages.”

For a brand named after the highest point in the heavens—indeed, whose modern-day slogan, “Time to Reach Your Star,” reflects a philosophy of dreaming big that has characterized the company since its founding in 1865—the recent success feels pre-destined.

But it took the May 2017 arrival of Julien Tornare, a Swiss watch executive who’d spent 17 years at Vacheron Constantin—where he led the venerable brand, first in the US, and later in the Asia-Pacific region—to jumpstart Zenith’s modern revival.

Handpicked by Jean-Claude Biver—the legendary marketing executive who served as president of the LVMH Watch Division (LVMH acquired Zenith in 1999)—Tornare had been familiar with Zenith since joining the Swiss watch industry two decades ago.

“I always kept an eye on the brand thinking it was a beautiful brand with a beautiful story, but it wasn’t clear where it was heading,” Tornare recalled on a recent phone call. “My first effort was to travel around the market, speaking to retailers, press, and listening. And after understanding the situation, I figured I needed two to three years to get the brand back on track.

“I started from scratch, from distribution to the product portfolio,” he added. “There was very little to no digital activity. Everything we had to fix.”

Tornare’s chief priority was to establish what the Zenith brand was all about. “It has a very long, beautiful, authentic heritage, but it was very much turned to the past, a bit dusty and old,” he said. “My job was figuring out how to capitalize on the history but show the brand as a modern digitalized company. That was the balance that came to life two years ago, more or less in the middle of Covid.”

During the early days of the pandemic, Tornare wasted no time in embracing the digital sphere. “When we had to lockdown in early 2020,” he said, “the first thing I told my staff was, ‘Let’s keep the brand super active. I don’t want to waste the work of the last few years.”

A steady stream of online activity ensued, including Instagram Live sessions with the brand’s celebrity ambassadors, interviews with executives and plenty of contact with clients. “The year was tough, but in the last few months of 2020, we realized we had been gaining market share,” Tornare said. “We started ’21 with 40 percent growth because we took advantage of 2020 to be more active and reorganize the company.”

In order to make good on his vision of transforming Zenith into a nimble and modern player on the horological scene, Tornare slashed the brand’s global distribution network, from 850 doors to its current stable of 550. He applied the same slash-and-burn philosophy to the product portfolio, reducing the number of SKUs from a few hundred to 110.

At the same time, he bet big on a new collection, Chronomaster Sport, which debuted in January 2021 to general praise for its next-generation El Primero 3600 caliber, which boasted an increase in timekeeping performance, a power reserve of 60 hours, and a black ceramic bezel etched to mark each passing 1/10th of a second. The face of the line: Zenith’s newest ambassador, the NFL quarterback Aaron Rodgers.

(Not that the Chronomaster was without its critics: Some people felt the models too closely resembled the Rolex Daytona—which, in a twist of horological histories, was once powered by the El Primero.)

That wasn’t all. The brand also used the pandemic as inspiration to expedite its foray into e-commerce, which first went live in the summer of 2020.

The industry has certainly noticed. “Mr. Tornare is rebuilding the brand from the ground up, whereas all his predecessors were merely ‘cleaning the shelves and window dressing,” Oliver R. Müller, founder of LuxeConsult, a watch consultancy based near Lausanne, Switzerland, told Robb Report.

He cited the names of three of the brand’s most recent chief executives, Jean-Frédéric Dufour (who famously departed in 2014 for the top job at Rolex); Aldo Magada, Dufour’s replacement; and Biver himself: “They all were stuck in the first degree of a brand with an incredible history and legacy,” Müller said.

“And that is the challenge for this brand, as it is perceived as being a very prestigious brand with a rich history,” he added. “In chronometry, it certainly is, having won the most prizes at chronometrical contests from 1940 to 1971 (when the last of such competitions took place). But for the rest, the brand has been a sleeping beauty for too long.”

Overseeing a brand that has already come back from the brink of irrelevancy, Tornare is determined to keep Zenith on track. And he is encouraged by some of its most stalwart supporters.

To wit: In 2019, during an event at Zenith’s manufacture in Le Locle celebrating the El Primero’s 50th anniversary, Tornare assembled a group of retired watchmakers who’d worked at the company in 1969.

“I managed to find eight people—the youngest was born in 1946 or ’47, and the oldest was born in 1937,” Tornare recalled. “We got them around the table, had some drinks, and they told me many stories that were not available in any book, just in their memories.

“It was such a moving few hours,” Tornare added. “They told me, ‘When we were in the 1960s creating this movement, we were a startup. The word wasn’t around yet, but we were innovators. Please continue to move forward.’ And once I heard those words from these people in their 80s, I knew we had the right strategy.”