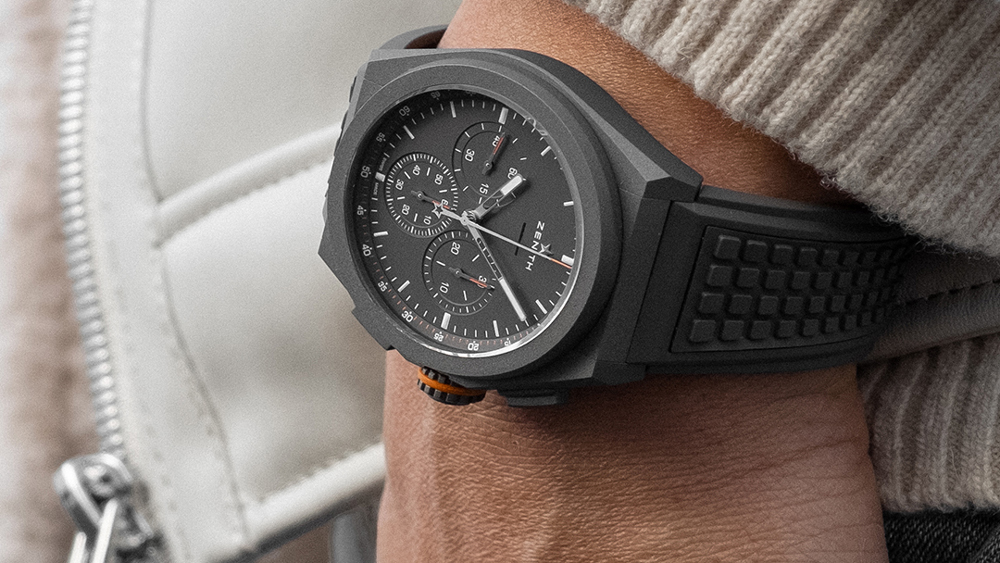 Like the 2020 Land Rover Defender, the new Defy 21 Land Rover Edition chronograph from Zenith—the fourth model to emerge from the carmaker and watchmaker’s 3-year-old partnership—is, to quote Robb Report’s automotive editor, “a modern take on a beloved classic.”

The matte casing of the 44 mm wristwatch—which comes in microblasted titanium, a material that absorbs light from all angles, drawing attention to the case’s faceted surfaces—conveys a sophisticated yet rugged vibe, while the El Primero movement inside the high-frequency chronograph harkens back to the Swiss watchmaker’s fabled 1969 caliber, an icon of mechanical watchmaking.

Unveiled earlier this month at LVMH Watch Week in Dubai, the limited-edition timepiece coincides with the release of the next-generation Land Rover Defender, which made its public debut at the Frankfurt Motor Show in September. (Land Rover produced the cult classic British SUV from 1983 to 2016; the 2020 version has a more luxurious vibe while retaining its reputation as an all-terrain vehicle.)

“It’s such a special car that when we started to discuss with Gerry McGovern in the UK a year ago he said, ‘You know, with this one let’s do something crazy,'” Zenith CEO Julien Tornare told Robb Report. “In the past, they wanted to go for a more classic watch, but with this one, we chose the Defy 21 and we brought some very special material to get a watch with strong character, because the car is a crazy car, so we want a crazy watch.”

Designed to look raw and minimalistic, the Zenith Defy 21 Land Rover Edition captures “the essence of the new Land Rover Defender: modern, durable and highly desirable,” said McGovern, chief creative officer of Land Rover, adding that it was his favorite of the Zenith-Land Rover co-creations.

Zenith and Land Rover teamed up for the first time in 2016, with the debut of the El Primero Range Rover Special Edition. (In explaining the synergies that united the two brands, Zenith cited the importance of the year 1969 to both of their origin stories. For Land Rover, the year saw the introduction of a prototype of the legendary Range Rover, its first luxury off-road vehicle.)

Over the past three years, the partnership has resulted in four timepieces: two Chronomasters, one Defy Classic and now the Defy 21. The latest is arguably the best and was one of the highlights of LVMH’s Dubai Watch Week. Available in a limited edition of 250 pieces, the Defy 21 Land Rover Edition retails for $13,400.