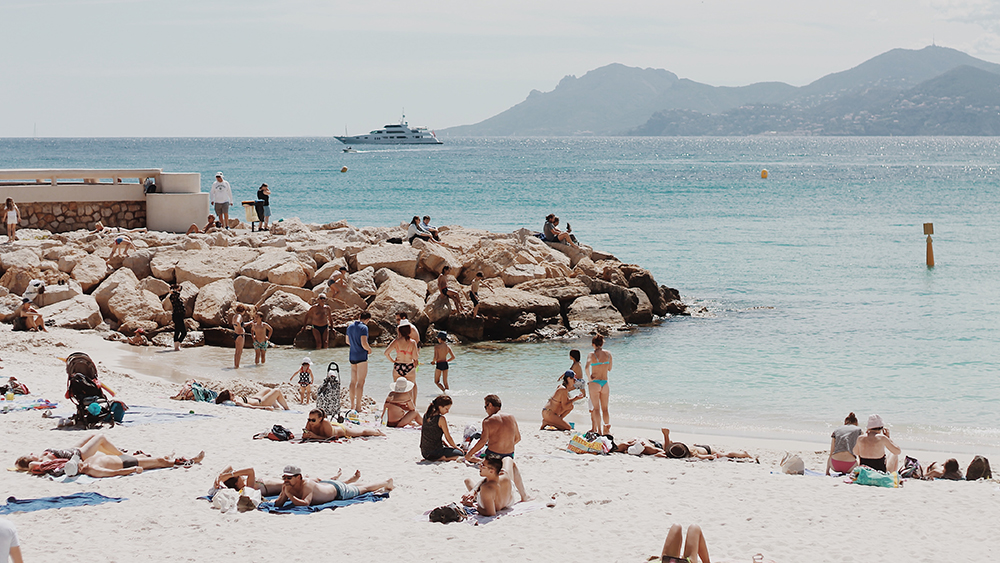 This handful of luxurious hotspots is guaranteed to bring out your inner Alain Delon.

Where else to kick off a round-up of illustrious hostelries in the glitterati’s European summer hideout of choice than the institution whose pool area was immortalized via the lens of Slim Aarons back in the Jet Set heyday? Nestling on the southern tip of the Cap d’Antibes, this Gatsby-esque building—whose décor remains authentically Gallic without a hint of pastiche—has also kept its Hollywood-star credentials intact. Clientele these days get to lounge around a large heated seawater pool hewn from the rocks. Rooms start at €600 (around $665) per night.

From the long-established to the gleamingly new: Hôtel Lou Pinet is a new opening stewarded by the founder of French prêt-à-porter brand Naf Naf Patrick Pariente, along with his daughters. Its 34 airy, super-relaxed rooms and suites—proper chunky keys in place of magnetic cards, naturellement—are housed in a trio of Mediterranean-style buildings, overlooking the largest swimming pool in Saint-Tropez. Each is characterized by interior designer Charles Zana’s penchant for Provence’s rich arts heritage. Rooms start at €600 (around $665) per night.

This all-new establishment was purchased by Bernard Arnault’s LVMH Hotel Management in 2016. Nearly all of its 30 light-soaked rooms—calmly nautical, with their azure and ivory tones—offer pinch-me panoramas the yacht-studded Bay of Saint-Tropez. The Guerlain spa and Chef Arnaud Donckele’s gourmet restaurant Vague D’Or turn the glamour factor up to 12.
Rooms start at €600 (around $665) for a Classic Courtyard Room during low season.

Brigitte Bardot—who once described Saint-Tropez as a “little nook of paradise”—served as muse for Lebanese hotelier Jean-Prosper Gay-Para to create the Byblos in St Tropez, whose floors have since also been stardust-sprinkled by the likes of Jack Nicholson and Beyoncé (it was where Mick and Bianca Jagger spent the night together, so to speak, post-nuptials). The 180 square meter, chromatically fearless, zig-zag-happy suite designed by Missoni Home in celebration of the hotel’s 50th anniversary (see below), which overlooks the pool, is as charming and therapeutic as any suite in the region. A night at the Missoni Suite starts at €4,500 (around $4,970).

If wooded serenity suits you better than coastal glitz, this newly reopened hotel, built on the ruins of a 12th century Templar fortress, offers views of the Mediterranean one way, the Southern Alps the other. Whether reclining by the pool, utilizing the tennis courts or being pampered at the Spa Saint-Martin by La Prairie, your mind will be captivated by the surrounding Provencal landscape that’s oiled the creative cogs of the likes of Picasso and Chagall. Rooms start at €330 (around $365) per night.

The Riviera boasts no shortage of places to see and be seen, but Hotel Epi Plage—an intimate and well-appointed hideaway on a private stretch of Pampelonne beach—feels a lot more like staying at a friend’s seaside home than booking a suite at a major hotel. Its 10 cabanas underwent a major renovation in 2018, and accommodate between two and four people each. That might be why it’s been attracting the kind of bold-faced names who value solitude (Brigitte Bardot, Sylvester Stallone, Madonna, et al.) since it opened in 1959. You can add your name to the list from $996 a night.

From Foodies to Culture Hounds: These 5 New LA Hotels Can Match Your Travel Personality