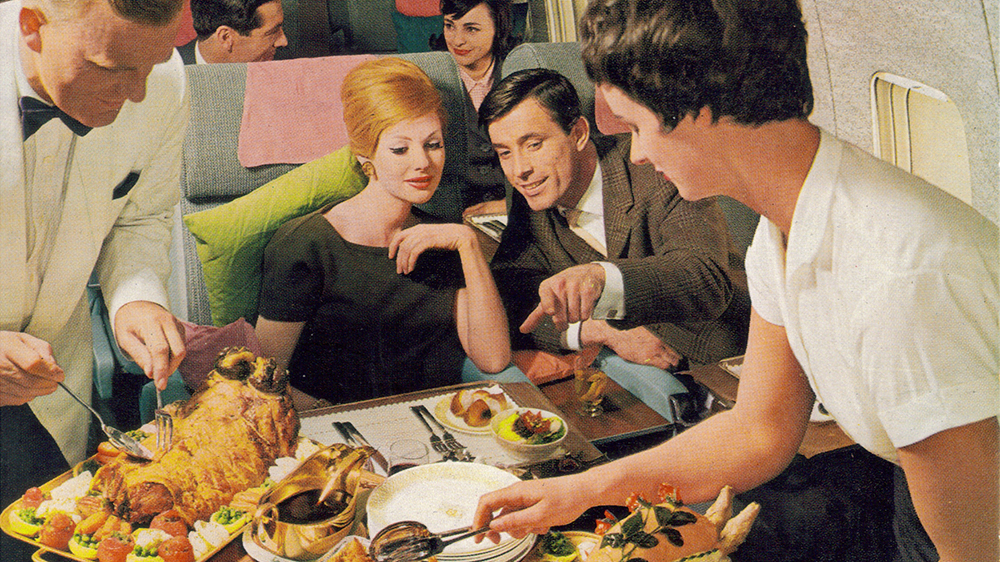 As anyone who remembers when flying commercial meant fine china, smoking sections and nary a flip-flop or yoga pant in sight will tell you, a lot has changed with air travel in just a few short decades. Which is nothing compared to the evolution British Airways has seen.

Celebrating its 100th anniversary this year, the airline was known as Air Transport & Travel when it flew the world’s first commercial scheduled air service from Hounslow Heath to Paris on August 25, 1919. Since then, the legacy airline has operated under several names (including BOAC, Imperial Airways, and BEA) and undergone many changes (including the success—and discontinuation—of its supersonic Concorde service), but through it all, the company has continued to evolve to serve the needs of contemporary travelers. Today, a British Airways aircraft takes off somewhere in the world every 90 seconds, on its way to one of over 200 destinations in more than 75 countries.

To commemorate its milestone birthday, British Airways is investing £6.5 billion in new developments and launches over the next five years, from new designer-crafted uniforms to lounge openings, re-envisioned cabins, and upgraded tech amenities. It’s also a time to celebrate the airline’s past, notes Alex Cruz, British Airways’ Chairman and CEO. “Our history has shaped who we are today, so our centenary is the perfect moment to revisit our heritage and the UK’s aviation landscape,” he says.

Here, we take a look at what it was like to fly BA in the past—and reveal a sneak peek at some of the upcoming new rolling out this year.

Then: Cuisine has always been a focus for the various iterations of British Airways. Back in the day, there was ox tongue and peaches in Melba sauce on flights in the late 1930s; in the ’50s, it was lobster mayonnaise and banana splits on the original First Class cabins’ and for a special 1987 Christmas menu, the airline served traditional roast beef with Yorkshire pudding. Culinary trends were also part of the experience: In 1985, for example, a La Cuisine du Ciel program of lighter continental dishes was launched in all three cabins, followed by the introduction of quicker, easier options on late-night departing flights in the late ’80s, and healthier menus in the ’90s (the latter are still offered today.)

The presentation of the food has always been important, too: Silver-plated cruet sets were the norm from the 1960s to the ’80s (they ultimately had to be replaced because too many passengers were taking them as souvenirs), as were crystal glasses, Royal Doulton china, Regency striped white linen, and spiral-stemmed wine and Champagne flutes.

Now: In addition to offering Club World and First passengers full pre-flight meals in select lounges around the world (a great option for when you want to maximize shut-eye on board), BA has conducted extensive studies on how taste buds change at high altitudes in order to craft tastier in-flights meals. Designed by chefs using seasonal ingredients, current long-haul business- and first-class menus have included choices like quinoa and edamame salads, sustainably-sourced cod satay with eggplant curry, and oven-baked vanilla custard, all paired with fine wines. New this year is restaurant-style catering from Do&Co, offered in all three cabin classes, plus a la carte menus and afternoon tea service in First. The latter two are served on bone china designed for the airline by British tableware brand William Edwards, with glassware by Dartington.

Then: Way back during the earliest commercial flights, there were no female crew members or cabin attendants. All on-board service was performed by men, and their uniforms were military in style. By the 1940s, though, female flight attendants were the norm, and the designers creating their uniforms focused on projecting elegance and glamour, adding elements like severely waisted jackets with rolled collars; cockade hats; and long, single-pleated skirts reminiscent of the Dior “New Look” of the time.

Over the decades, BA flight attendants have donned an array of outfits reflecting both fashion trends and company developments (like specific routes or new branding colors.) In 1967, for example, couturier Hardy Amies—the former dressmaker to HRH Princess Elizabeth, before she became Queen—created a “jet-age-inspired” look with shorter navy blue skirts (in keeping with Swinging ’60s trends) and a red overcoat to match the wings of the new BEA planes.

The famous Paper Dress from 1967  Photo: Courtesy of British Airways

Now: Rolling out this year, BA’s latest designer collaboration is with Savile Row tailoring expert and former creative director of Givenchy Homme Ozwald Boateng, who has earned an Order of the British Empire honor for his work. Known for adding a contemporary twist to classic British tailoring, Boateng is taking his task of creating uniforms for some 32,000 employees seriously, working with employees during the development and testing process and shadowing staff members to better understand how the clothes need to move and perform.

Of course, style will ultimately be the biggest factor, says Boateng. “I’m looking forward to taking a uniform and refining it into a collection,” he says. Though specifics are being highly guarded in advance of the launch later this year, expect the new styles to reflect the airline’s branding colors—and Boateng’s love of detailed tailoring.

Then: Despite all the service bells and whistles, the cabins of the Golden Age of Travel weren’t all that innovative or comfortable—something BA started to change in the 1990s. The 1991 re-launch of their first-class cabins included the use of more comfortable seat fabrics, while fully-flat beds—the first of their kind for any airline—were introduced in 1995. Other past innovations included the herringbone style layout in Club World cabins, which allowed two passengers travelling together to sit next to each other in a more private middle section, and the offering of pajamas and amenity kits by British designers and product brands.

The first airline seats wouldn’t recline all the way flat until 1991.  Photo: Courtesy of British Airways

Now: BA recently unveiled 1-2-1 configuration business-class cabins with new Club Suite seating, in which each seat enjoys direct-aisle access, a door for greater privacy, and flat-bed seats, plus 40 percent more storage, a vanity unit and mirror, WiFi, and 18.5-inch entertainment screens on which to access more than 1,000 hours of high-definition programming. Meanwhile, in First, find improved turndown service with 400-thread-count bedding and foam-fiber mattress toppers, and new men’s and women’s loungewear and amenity kits from British brands Temperley and Elemis.

Then: In its various iterations, British Airways has been behind numerous aviation industry innovations and milestones since it flew that first flight in 1919, including launching the first commercial jet service in 1952; flying the first transatlantic jet engine flight between London and New York in 1958; pioneering the automatic landing in 1965; and operating the first supersonic passenger jet service, the Concorde, in 1976. Add to that the introduction of the first fully-flat seats in the ’90s, and it’s clear that the airline has continued to strive to set new standards in air travel.

Engineers work on the Concorde in the 1980s  Photo: Courtesy of British Airways

Now: As part of the current investments, many planes will get industry-leading high-speed WiFi and power outlets in every seat, and the airline will also take delivery of 72 brand new aircrafts, including A350s with reduced noise levels, ambient lighting, more humidity, and other wellbeing touches.

But many of BA’s top tech touches are found on the ground. With up to 145,000 customers flying with the airline every day, BA is actively investing in and pioneering the use of technology and automation to enhance the passenger experience and ensure that flights depart on time. This includes being the first UK airline to introduce automated biometrics, including facial recognition, at self-service boarding gates for domestic flights, which helps cut boarding time in half. This has also been introduced on some international flights, with smartphone facial identification or cutting-edge AI allowing passengers in Los Angeles, Orlando, and New York to board using only their faces—no passport required. Self-service bag drops; high-tech remote-controlled Mototok tugs that help planes push back faster; and other new technologies are also being rolled-out more extensively. It all makes us wonder—what will the skies look like for BA in another 100 years?