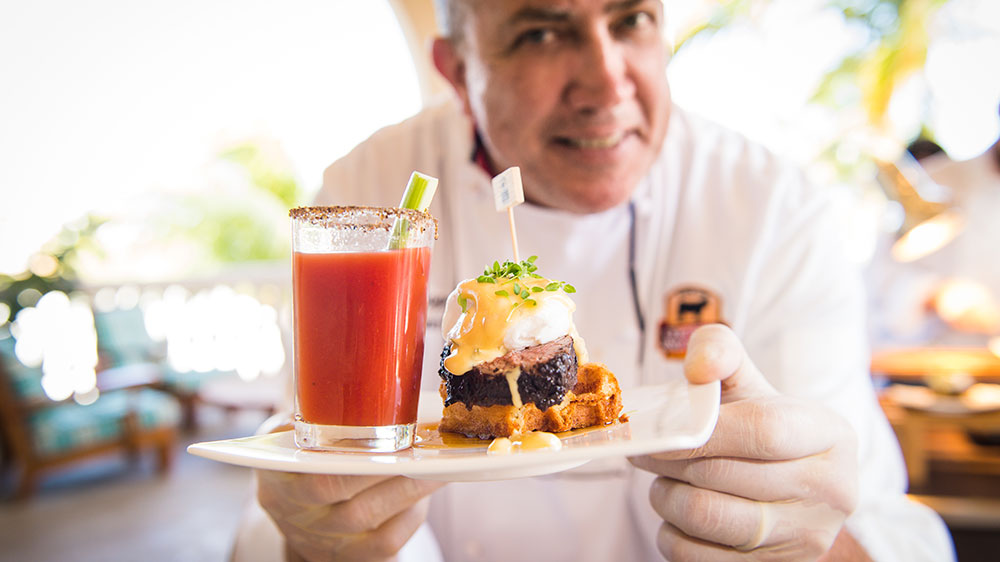 If the idea of a food festival conjures the mental image of long lines, flimsy paper plates and sticky plastic wine glasses, you haven’t been to one of these. The latest trend among luxury resorts is launching in-house food-and-wine festivals, bringing together their discerning clientele with renowned chefs, winemakers and spirit producers from around the world—and providing even greater reason for guests to book a trip. Case in point: Haute Cuisine, which debuted in Miami’s Bal Harbour Village in May 2019. “The seasoned travelers who visit Bal Harbour Village have stayed in the best hotels and resorts around the world,” says John Rolfs, general manager at St. Regis Bal Harbour Resort, a Haute Cuisine co-host. “They are not only looking for unique experiences that they cannot get anywhere else, but they expect the highest level of cuisine and service.” From the lush hills of the Pacific Northwest to the aqua seas of the Caribbean, these are the best luxury resort food-and-wine festivals from coast to coast.

One of LA’s most widely known sommeliers, Christian Navarro of Wally’s Wine & Spirits, can be largely credited for making the inaugural Four Seasons Maui Wine & Food Classic a best-in-class experience. He partnered with the resort to create the three-day event, held the first week of March ever year, that brought together 200 guests alongside 30 of the world’s best wine and spirit makers—like Dom Perignon and Château Cos d’Estournel—and Michelin-starred chefs from around the country. Throughout the weekend, guests engaged in sommelier-moderated wine tastings, elite wine dinners, a grand oceanfront gala and the Billecart-Salmon 200th-anniversary celebration in the resort’s palatial Maile Presidential Suite overlooking the ocean.

The Ritz-Carlton brand is well-known for food-and-wine festivals at several of its properties, yet none are as renowned as the Cayman Cookout at the Ritz-Carlton, Grand Cayman, set along the island’s Seven Mile Beach. January 2020 marks the 12th annual event, which has evolved over the last decade (for example, the 2019 event focused on more women headlining chefs), but remains true to its simple origin: an intimate gathering of family and friends enjoying food, drinks and fun in a luxurious Caribbean setting. A highlight every year is the Beach Bash, which begins with a catamaran sail across the turquoise Caribbean Sea to Stingray City. Here, guests swim with the majestic sea creatures before continuing on to Rum Point for a Caymanian culinary experience.

Also in March, Relaix & Châteaux’s famed GourmetFest takes place at L’Auberge Carmel in Carmel-By-The-Sea, California. Twenty events throughout the four-day festival range from rare tequila tastings and wild mushroom hunts to a black-truffle-and-black caviar dinner. The most luxurious experience of the 2019 event was a fleet of 2019 Rolls Royces that transported guests to a reception at a Wallace Cunningham–designed home set high atop a cliff in the Carmel Highlands. More than 3,000 guests attended, multiple billionaire CEOs among them—and for obvious reasons. “Where else can you taste a black-diamond-filtered vodka, [eat] caviar harvested two weeks ago, clink glasses of Taittinger with [owner] Clovis [Taittinger], taste an old Lafite and get up close with Michael Mina?” poses David Fink, CEO of Mirabel Hotel & Restaurant Group, which puts on the event.

At Pebble Beach Food & Wine Festival, more is more. Held at three luxury resorts surrounding the famed golf course—The Inn at Spanish Bay, The Lodge at Pebble Beach and Casa Palmero at Pebble Beach—the April event attracts a staggering 10,000 guests annually. To create a custom feel within such a grand-scale festival, four VIP packages let guests choose their own experience, with the most elite Imperial package granting carte blanche for the full weekend (plus complimentary rides in chauffeured Lexus vehicles, access to vintages dating back to the 1960s and VIP after-parties each evening). This year’s most exclusive event was the House of Mallmann Dinner with Argentinean chef Francis Mallman, held in a $37 million private home overlooking the Pacific.

Though more than 2,200 tickets were sold for the second-annual Nirvana Food & Wine Festival held at Sanctuary Camelback Mountain Resort & Spa in Scottsdale, Ariz., last April, this event prides itself on being a boutique festival with no long lines. With a series of intimate events that provide direct access to celebrity chefs like Robert Murphy and Todd English, the festival is further differentiated by a musical component, featuring local performers like the Potash Twins and New Orleans–based NOLAZ Band providing entertainment. At this year’s third-annual event, Nirvana added a fifth day to the program; two new events (including Wood, Wine & Wagyu, where chefs cooked family-style over open wood flames); and excursions to other Scottsdale restaurants, such as Fat Ox.

Now in its 13th year, Vegas Uncork’d, a food-and-wine festival put on by the most luxurious Las Vegas brands (The Venetian, Caesars, MGM Resorts, Cosmopolitan and Wynn) in partnership with Bon Appetit magazine, attracts about 5,500 guests to Las Vegas each May. It’s one of the longest-running events on the list, yet it continues to evolve each year. Some elements are classics—such as the Grand Tasting, held on the Caesars’s Palace pool deck, where celebrated chefs (think Nobu Matsuhisa and Masaharu Morimoto) prepare signature dishes—yet new experiences like editor-hosted cocktail parties keep it feeling fresh.

Evan Hosaka of Rosina educates guests on the craft of cocktailing at Vegas Uncork’d  Photo: Courtesy of The Venetian Las Vegas

When it launched back in 2006, Montana Master Chefs helped put the Resort at Paws Up in tiny Greenough, Mont., on the culinary map—and it continues to sell out year after year, with a cap of just 250 guests. Planned for September 26 through 29 in 2019, MMC has a New York City theme this year, so guests can expect to get to know chefs like Silvia Barban and PJ Calapa, and spirits experts David Wondrich and Noah Rothbaum. While the food and drink are special, what makes MMC bucket-list-worthy is its juxtaposition of high-class dining in a nature-filled environment. Imagine corralling sheep in the morning, shooting skeet in the afternoon and sitting down to a five-course feast in the evening before retiring to your glamping tent and falling asleep to the sound of the Blackfoot River.

The incredible location of JW Marriott Venice Resort & Spa is enough reason to book a trip: The resort is set on its own private island, Isola delle Rose, a 15-minute private boat ride from the city of Venice. The hotel debuted its first Gather, A JW Epicurean & Mindful Experience last year, filled with a roster of star-studded chefs leading demos and hands-on cooking classes (imagine learning to prepare perfect pici from Giada De Laurentiis or gleaning Sicilian kitchen secrets from Ciccio Sultano). The second-annual event, taking place September 26 through 29, will incorporate mindfulness and wellness components as well—including yoga on the lawn; biking excursions; and vibroacoustic meditation sessions, which use music and tactile vibration to induce a deep sense of relaxation.

Located 25 miles from Charleston, S.C., Kiawah Island Golf Resort upholds the gracious hospitality the state’s Lowcountry region is known for. Naturally, it rolls out the red carpet for the 800 guests who attend the four-day Gourmet & Grapes festival in late January/early February. For the first time at the 12th annual event in 2020, the festivities will kick off with a $1,500-ticket exclusive dinner held at a private Kiawah residence. That’s not to say it’s all buttoned-up sport coats and evening gowns, though; the 2018 event had a New Orleans theme that had guests dressing up in vintage masquerade masks and dancing to a brass band (and indulging in lots of Creole and Cajun cuisine, of course).

For the first time ever, Switzerland’s Haute Cuisine gourmet food-and-wine festival came Stateside in May. Fittingly, the event took place at The Ritz-Carlton Bal Harbour, Miami and The St. Regis Bal Harbour Resort, two of the top hotels in Miami’s elite Bal Harbour Village. Six international chefs holding a combined nine Michelin stars hosted interactive cooking classes, design- and fashion-themed dinners, and a formal gala in the St. Regis’s oceanfront ballroom to close out the event. Unlike many food festivals, Haute Cuisine allows guests to purchase tickets to individual events—with capacities ranging from 12 to 80 guests—making it easy to attend just one class or dinner, especially for locals.

On the cusp of spring in the Willamette Valley, known for its silky Pinot Noirs and crisp Chardonnays, The Allison Inn & Spa filled what has been traditionally a slower time in the region with an intimate four-day event, March 21 through 24, appropriately dubbed Wine Indulgence Weekend. Nearly every one of the 50 attendees was a past guest of the Allison, the only five-star property in the valley—a testament to the resort’s enduring allure. In addition to wine tastings and discussions with local winemakers, guests enjoyed decadent five-course dinners with pairings, a Valhrona chocolate tasting with pastry chef Shelly Toombs and off-site tours to renowned wineries such as Bergström Winery and Ken Wright Cellars.