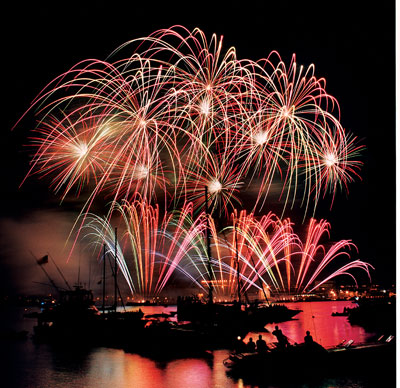 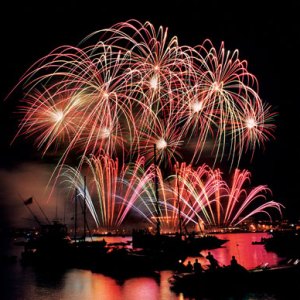 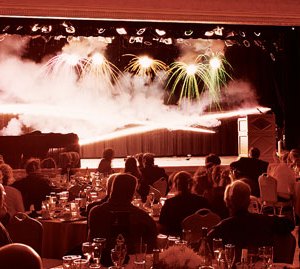 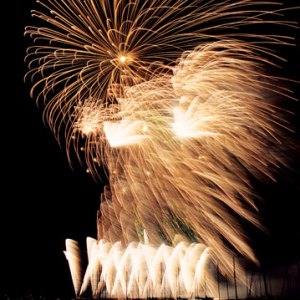 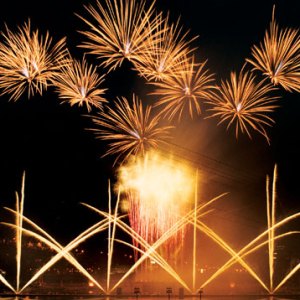 The invitations have been sent. The caterer and band have been selected. And long before the party plans were completed, arrangements were made for geysers of colored fire to erupt and blossoms of incandescence to open across the darkened sky, and for the display to culminate in a crescendo that presses the limits of the imagination.

Pyrotechnics are perhaps the most glorious form of entertainment that a host can arrange, because they are truly a spectacle—and because so few parties include them. “Fireworks for private parties is still a well-kept secret,” says Philip Butler, producer for Fireworks by Grucci, the Long Island, N.Y., pyrotechnic company. “Many customers just don’t know what can be done.”

For a fee of about $100,000, Grucci will present its World Class extravaganza, which eclipses all but the most extravagant municipal productions and certainly can add a unique flair to a wedding, birthday bash, bar mitzvah, or business-related celebration. Grucci may be the most well-known pyrotechnic company in the United States, but it is not the only one capable of dazzling party guests. For instance, the Pyrotecnico company of Pennsylvania in April 2004 produced a $50,000 show off the coast of Tortola in the British Virgin Islands for a real estate executive. He wanted to celebrate the women in his life, so he brought his wife, mother, daughter, and granddaughters, along with a few friends, to the island, where he hired a yacht that served as the viewing stand for the over-the-water—and over-the-top—display.

Hardly a recent phenomenon, fireworks have been around for thousands of years. In the 13th century, Marco Polo brought the first samples of fireworks to Italy from his travels to China, where alchemists first concocted the formula for gunpowder. The Chinese later created fireworks, initially using hollow bamboo sticks to hold the gunpowder and then employing paper tubes and a fuse. In the 16th century, England’s King Henry VIII, to please Anne Boleyn during her 1533 coronation parade, arranged for fireworks that took the form of a fire-breathing dragon. His daughter Elizabeth I also was fond of fireworks; when she visited her noblemen, they would honor her by launching skyrockets and igniting blazing fountains. During his reign, France’s Louis XV used the ornamental pools of Versailles as a backdrop for elaborate pyrotechnic shows enjoyed by royalty and courtiers alike. In reference to the spectacle that marked the birth of the dauphin in 1729, an observer noted, “It is easier to imagine than to describe.” Over the centuries, advances in chemistry have enabled pyrotechnic artists to create fireworks with more colors and brighter sparks, but like those of their predecessors, today’s fireworks still are made mostly by hand; a craftsman will spend hours constructing a shell that will entertain its audience for no more than a few seconds.

Every shell falls into one of three categories. The most common type is the aerial shell that typifies public events. These shells are cardboard packages of explosives that the pyrotechnician blasts aloft from a short tube. A timed fuse explodes the shell at its peak, producing a blossom of fiery stars, streams of sparks, or any of a score of other effects. Grucci often incorporates the aerial shells in its private shows, using them to begin an event; at a wedding, the master of ceremonies might announce that the bride and groom would like to dedicate a sky-filling shell to their parents. “The personalized aspect adds a special touch,” Butler explains.

In contrast to the aerial shells, the low-level or close-proximity shells—also called fountains, gerbs, mines, or cakes—create fiery patterns that begin at ground level and climb 30 to 100 feet into the air. They play minor roles, if any, in most public displays because they are not visible to many members of a dispersed crowd. At a private party, however, low-level devices can produce stunning effects, especially when they are fired en masse.

In most regions of the country, regulations allow operators to place the smaller low-level shells much closer to viewers—25 yards or nearer instead of the typical 100-yard buffer zone for medium-size aerial shells—offering them the sensation of being within the show.A third type of pyrotechnics, those that never leave the ground, have nearly disappeared from public shows, again because of viewing difficulties. They include set pieces, which employ burning lances to depict a scene, a message, or a logo in colored fire. A technician mounts the lances on a rattan framework and fuses them to ignite simultaneously. The set piece reached its zenith in 19th-century England, when visiting dignitaries from the colonies would see their faces represented in fiery tableaux 80 feet high. Once, when Queen Victoria was portrayed in this manner, a misfire made it appear as though the prim monarch was winking lewdly at her subjects. It was not recorded whether Her Majesty was amused.

A private function allows the designer to use his full palette of effects, which he can ignite with a computer-programmed electric firing device instead of by touching a flare to the fuse of each shell or fountain, as his predecessors would have done. The computerization produces precision and allows for the simultaneous ignition of an array of devices. Computer firing has advanced significantly the art of the pyromusical, or fireworks choreographed to music, an idea that dates to at least Handel, who in 1749 composed Music for the Royal Fireworks to accompany a show. With the current technology, when the pyro artist arranges effects to coincide with music, he knows the exact time lapse between the firing of a shell and its explosion aloft.

The pyro producer, working with the client, usually will select half a dozen songs, which can range from classical to pop, that will best enhance the display. (Sinatra’s robust version of New York, New York is a favorite finale among hosts in that state.) The producer will blend one- or two-minute excerpts from each tune into a medley and then design his show around this soundtrack, allowing the rhythms and melodies to lend structure to the presentation.

As with the party itself, a longer fireworks display is not necessarily a better one. Twelve to 15 minutes is the duration most pyrotechnicians recommend, and no show, they advise, should continue for more than 20 minutes. As one aficionado says, “I’ve seen five-minute shows that were so sublime they made me weep.” Length does not distinguish a $70,000 show from a $10,000 one; intensity does. The less costly production might include a succession of so-called palm tree shells, which create drooping canopies of golden sparks. The high-end event will create a veritable palm forest all at once, an awe-inspiring sight that has what fireworks people call “wow-value.”

As one might expect, the fireworks industry is one of the country’s most heavily regulated. When planning a private show, company designers will visit the site, assess the amount of available space, and determine the viewers’ vantage point. If the site is near water, they might suggest incorporating a pond or lake into the display or firing from a barge on a river or off the beach; the reflection of fireworks on water can be particularly enchanting.

Company producers then will consult with the client on the budget, the music, the theme of the party, any particular effects or colors desired, and the level of noise; fireworks do not have to be earsplitting. Once these parameters have been established, the fireworks company handles the rest.

Few forms of entertainment can match the emotional appeal of a well-executed pyrotechnic production. Wondrous by nature and satisfying in elemental ways, fireworks can leave guests with memories that are indelible. “Private customers are very appreciative of what we do,” Grucci’s Butler says. “They may start out jaded, but when they see the show they’re in awe. It gives them a kind of childlike enjoyment.” How to Prevent Your Show from Misfiring

Fireworks experts make the following recommendations to ensure that your pyrotechnic presentation is not a dud.

Plan early. The company you hire may need several months to obtain all the necessary permits. If your party falls near the Fourth of July or on a Saturday night, you will need to make arrangements many months ahead.

Vet the site. If you plan to have the display on your own property, check with your local fire chief about restrictions. If your function is at a resort or country club, ask the management about the possibilities and limitations.

Stay on top of the process. The fireworks company should handle the details, but it is your show, and you should remain involved in the planning process.

Be courteous to your neighbors. Do not schedule the event too late at night. If you cannot invite them to the party, at least warn them about it. Be sure your fire department and 911 operators are informed as well. (Often, the fireworks company will handle notifications.)

Spread out the production. Encourage the pyro artists to use all of the available area. A so-called lollipop show, a succession of aerial shells shot from one location, will not be as compelling as one that includes multiple launch sites.

Limit the length. Twenty minutes should be the maximum duration of the show, and briefer often is better.

Choose your music. The right songs, selected in consultation with the fireworks company, can significantly enhance the event.

Consider the weather. Rain obviously is an impediment, but display companies usually can work through it. Heavy fog is a greater obstacle. Winter fireworks can be enchanting.Give Your Guests the ‘Works

The best way to find a fireworks company is through a referral. You can begin by asking nearby municipalities which companies produce their Fourth of July shows. “Fireworks is an art,” says Julie Heckman, executive director of the American Pyrotechnics Association, an industry trade group. “When you hire a company, you’re hiring an artist. Their reputation is critical.” Following is a list of the larger fireworks companies around the country, although many smaller regional firms also are capable of producing top-notch shows.

Fireworks by Grucci: Located on New York’s Long Island, the firm operates nationally and internationally. It is considered one of the best, especially for high-end shows.

Zambelli Fireworks Internationale: Known as the First Family of Fireworks, Zambelli is located in New Castle, Pa. The firm is one of the oldest and largest American fireworks companies, with branches in Florida and California.

Pyrotecnico: Founded in 1889 in New Castle, Pa., and still owned by the Vitale family, Pyrotecnico has expanded by acquiring several smaller firms. The company produces more than 2,000 public and private shows a year.

Melrose Pyrotechnics: This Kingsbury, Ind., firm was founded in the early 1900s and now has eight distribution and sales locations around the country.

Rozzi’s Famous Fireworks: Located outside Cincinnati, Rozzi manufactures pyrotechnic devices for other firms. In July it won the silver trophy in the prestigious Montreal fireworks competition.